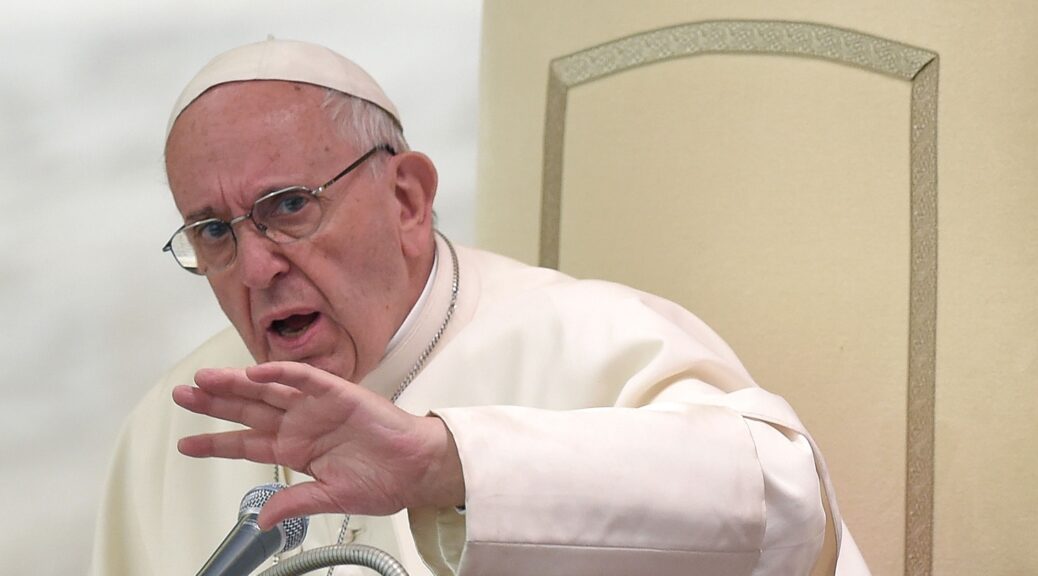 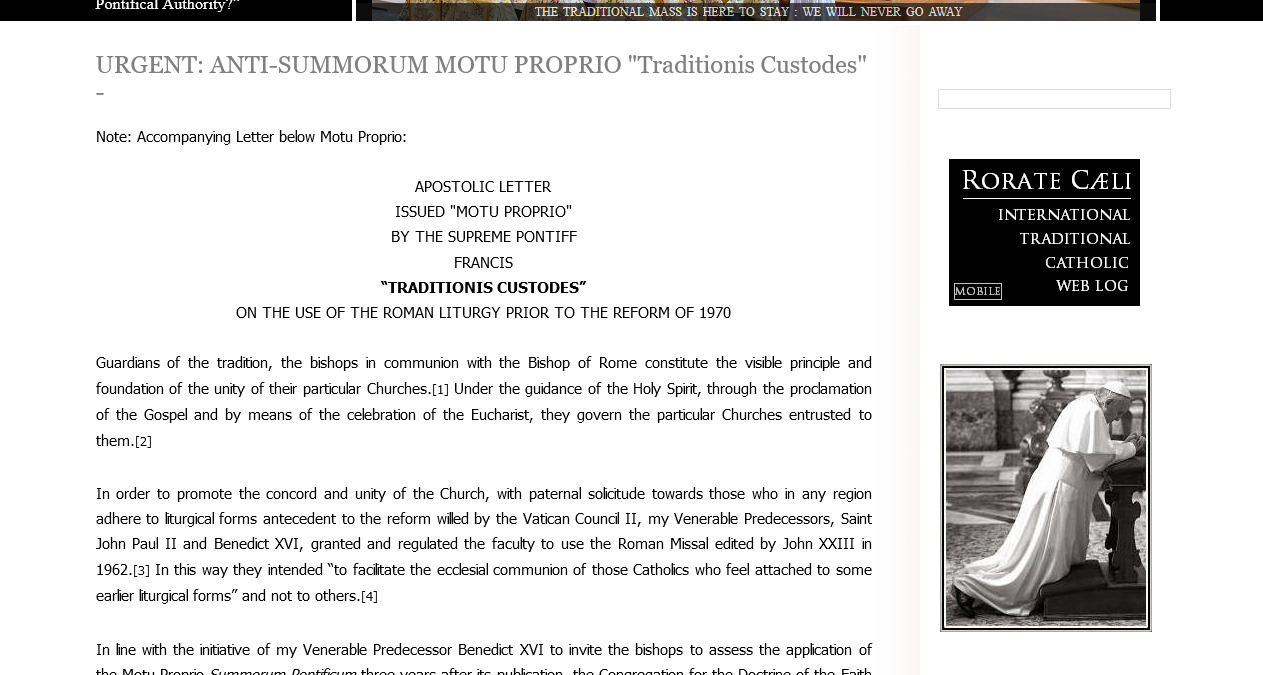 Well the Globalist puppet, installed by the CIA during the putchs of February – March of 2013, has barked a lot for 8 years but now lashes out against those whom he has managed to control psychologically, despite all the canonical and theological evidence that he is not the pope, never was or even could be a pope.

And thus he has published Traditionis Custodes, his motu proprio against the Traditional Roman Rite, or Ancient Roman Mass, canonized by the Bull of Saint Pius V in 1570.

I do not usually comment on anything he writes, but occasionally a canonical comment is deserved. Here there are several major errors, which I will note, to open the eyes of those who still have eyes to see:

A Revealing series of faux paux

Bergoglio makes several errors in his attempt to present himself as the Vicar of Christ. First of all, he styles himself as the Supreme Pontiff, but not as the Roman Pontiff.  This is revealing. He is recognizing Pope Benedict XVI as the true Pope.

He does this again, by using the First Person Singular in the document, thus making no claim to the Pontifical Authority or Regality as the Vicar of Jesus Christ. Very telling. Pay attention!

Second, the document’s title (if the English authentically represents the Latin) nullifies its contents: “ON THE USE OF THE ROMAN LITURGY PRIOR TO THE REFORM OF 1970”, because as such it refers to Masses said before 1970.

Third, he calls the men whom he has canonized, “Saints”, and I have anticipated that argument in my recent article, “Why I believe Paul VI and John Paul II are more likely damned, not saints” and argues from their actions to establish his “motu proprio”. This is circular logic and circular spirituality.

He confesses a guilty conscience as an Anti-Pope by calling Pope Benedict XVI twice, his “Venerable Predecessor”.

Now for a line by line critique:

Art. 1. The liturgical books promulgated by Saint Paul VI and Saint John Paul II, in conformity with the decrees of Vatican Council II, are the unique expression of the lex orandi of the Roman Rite.

So, the Mozorabic, Gallic, Sarum and all the other forms of the Latin and Roman Rites were not expressions of the lex orandi of the Roman Rite? Is he saying that they are heretical? He seems to be excommunicating every Roman Catholic who ever prayed before 1970.  How diabolic and how Marxist. Erase the past, Emend you memories!

Art. 2. It belongs to the diocesan bishop, as moderator, promoter, and guardian of the whole liturgical life of the particular Church entrusted to him,[5] to regulate the liturgical celebrations of his diocese.[6] Therefore, it is his exclusive competence to authorize the use of the 1962 Roman Missal in his diocese, according to the guidelines of the Apostolic See.

Here the Anti-Pope shows his hand. He rejects as a principle of law that the Apostolic See has any right or competence to authorize liturgical books outside of the Diocese of Rome.  No Roman Pontiff or Western Patriarch has ever talked this way.  Anti-Pope alert!

Art. 3. The bishop of the diocese in which until now there exist one or more groups that celebrate according to the Missal antecedent to the reform of 1970:

§ 1. is to determine that these groups do not deny the validity and the legitimacy of the liturgical reform, dictated by Vatican Council II and the Magisterium of the Supreme Pontiffs

Here in Article 3, n. 1, he insists on the validity of the invalid and the legitimacy of the illegitimate, since inasmuch as Vatican I declared infallibly that the Roman Pontiff is a servant not author of Sacred Tradition, it is beyond the power even of a valid pope to create ecclesiastical tradition. He can only preservere it. Therefore, the liturgy of Paul VI is entirely illegitimate in principle and in its very ratio essendi. As for its validity, all statistics show it has no power to sanctify and sustain the life of Holy Mother Church, only to lead the faithful away from Her. And Pope Benedict XVI in his motu proprio already decrees as historical fact which can never be denied, that the Ancient Mass was never abrogated.

Historically, here there is an expression of a grave error, since Vatican II dictated nothing. I think he uses, “dictated”, because this is the traditional verb used for the action of the Holy Spirit in authoring Scripture.  As for the Magisterium of Supreme Pontiffs, I already mentioned why their teaching authority cannot create ecclesiastical tradition. Thus it can neither demolish one.

Now its open war at Rome, please join the fray

As you can see, if you read the rest of the document (click the image above for the English translation), there is going to be a radical and swift elimination of the Traditional Latin Mass among Bergoglians.  That their sacrilegious lips who utter the name of an Antipope no longer be allowed to pray that Mass is certainly a divine punishment, but for the Faithful who had doubts about who is the true pope, God has just providentially permitted a big BLINKING sign to be set up at the Vatican:  This idiot is not the one you are looking for!

I find significant the recent devastating floods in Germany in the very region where the author of the new Mass theology, of Communion in Mystery, a Benedictine Monk who modeled his theology on the Nazi Political Rallies, which floods killed 93 and caused 1000 to disappear. The New Mass is a flood which kills and causes the faithful to disappear.

For my part, I here and now resolve to open a Traditional Latin Mass Center at Rome, with priests in communion with Pope Benedict.  Let the Restoration of the True Church begin! If you would like to help, make a donation below:

I am not asking this of my regular rear-guards, but of those who were in communion with Bergoglio up to this day, but now see that he is not the Pope and could  never be. I ask you, as an act of piety and PENANCE for having called this horror “the Pope”, to support this new initiative at Rome.

20 thoughts on “Anti-Pope forbids his followers the Ancient Mass, except with special permission”