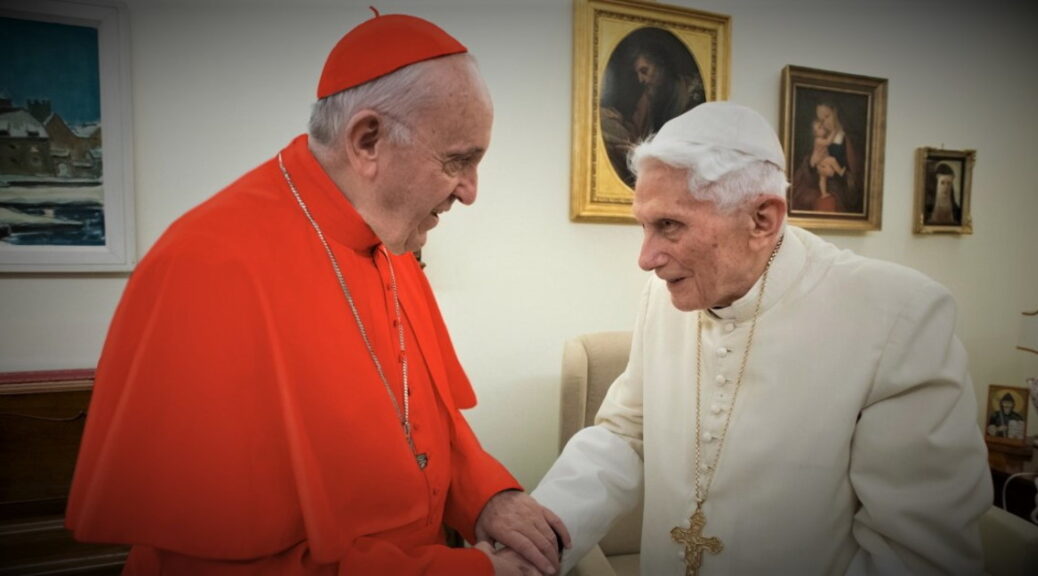 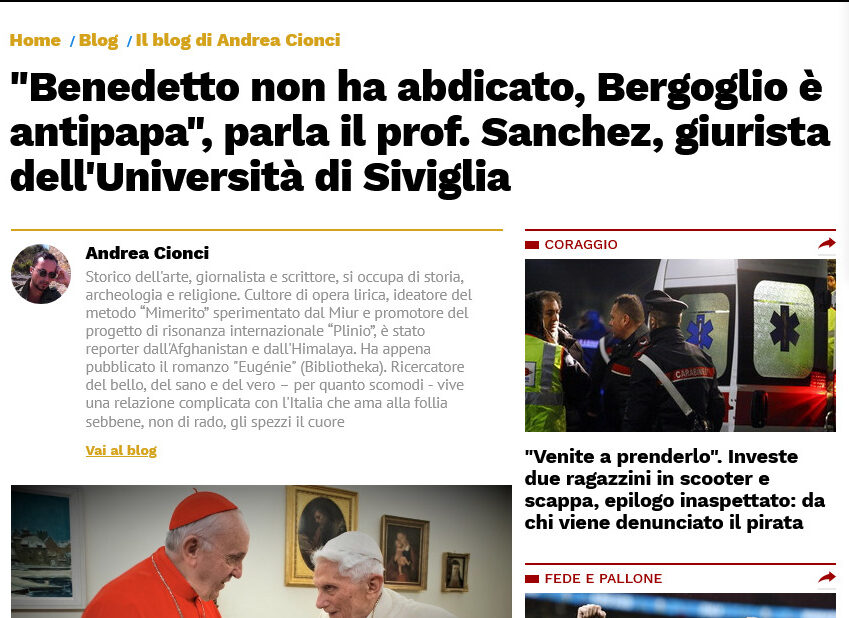 An Interview by Andrea Cionci

On 29 June, precisely on the day of the 70th anniversary of the priesthood of Joseph Ratzinger, which is also the anniversary of Saints Peter and Paul, we received the answers of prof. Antonio José Sánchez Sáez , Professor of Law at the University of Seville (founded in 1505).

After Bergoglio’s drastic demolition of Summorum Pontificum – the most important act of Pope Benedict XVI’s pontificate which liberalized (dutifully) the Latin Mass – the mass par excellence, endowed with “absolute guarantees of catholicity” – is The time has come to propose this interview on a subject that – take note – all the media tend to avoid like the plague . Inexplicably, so too does a large part of the traditional-conservative world, which probably deludes itself into being able to combine agreements for the post-Bergoglio while ignoring the inevitable sword of Damocles of a natural anti-papal succession, in the case of Ratzinger’s invalid renunciation.

Yet, in a civilized country, there is talk, discussion, even harshly, but one confronts each other : dialogue, bridges, not walls. It would be desirable that someone could demolish this complete reconstruction of ours, but so far no one has succeeded, (and not even try): HERE

With 80 publications, various research stays at the Universities of Harvard, Bologna, Florence, Frankfurt, Sorbonne and 5 academic awards, Professor Sànchez has been writing for years on the Catholic website comovaradealmendro.es “. Currently, he is the university with the most authoritative curriculum. to have had the courage to “put his face to it”.

Professor, you have been saying for some time that you are following our investigation into the resignation of Benedict XVI …

R . “For many years, those who thought that the only reigning pope was Benedict XVI were alone, misunderstood by the Church. It is comforting to see how an important Italian newspaper has chosen to discuss this issue, which is fundamental not only for Catholics.

No other news organization talks about it, yet it should be the journalistic case of the millennium …

R . “The overwhelming majority think that card. Bergoglio is a bad pope, but ultimately the pope. They criticize his delusions, but consider him a father. And this strengthens it more. Others are simply worldly Catholics, happy with his innovations. Finally, others suspect that Francis is an impostor, but they don’t dare to talk about it in public ”.

From your website, you claim that ecclesiastical Freemasonry forcibly placed Bergoglio on the throne of Peter. What evidence?

R . “From the appreciation of the international lodges, to the inclusion of Masonic elements in the liturgy and devotion, to the rhetoric on the Universal Brotherhood … Suffice it to say, for now, that Father Malachi Martin, a highly cultivated Jesuit advisor to Card. Bea, who read the entire Third Secret of Fatima (including the words of Our Lady not yet revealed), wrote a book called “Windswept House” where she explained the plan of ecclesiastical Freemasonry: to force the pope to resign to impose a false pope who, exploiting the obedience of the clergy and the faithful, it will lead the Church to the great apostasy prophesied by St. Paul. What Malachi Martin did not know is that Benedict XVI had been prepared for some time and did not resign validly, remaining pope: a master’s game ”.

For what main reasons would your waiver be invalid?

R. “I was surprised when I calmly read your Declaratio di Renouncement in Latin: Pope Benedict did not renounce the munus, as required by canon 332.2 of the Code of Canon Law, but the ministerium. As if a professor resigned from teaching without leaving his chair, remaining a professor at the University. Furthermore, Benedict XVI has given us another clue by becoming “pope emeritus”, a canonically impossible title since to be emeritus it is necessary to have ceased from office by age or by accepted resignation … and neither of these conditions is met in resignation. of a pope (can. 185) “.

Do you think he did it on purpose? Perhaps, how does the well-known philosopher Giorgio Agamben ventilate to “strengthen the papacy”?

R. “I have read Agamben’s book“ The mystery of evil. Benedict XVI and the end of time “. I agree that Benedict XVI currently acts as a “katejon”, a “power that holds back” the revelation of the Antichrist (Massimo Cacciari also spoke of this). We know that Benedict XVI is perfectly familiar with the Marian messages of Fatima, Garabandal, Akita. He deliberately acted in this way, knowing that the wolves would come for him (because they had already done so against John Paul II). So he pretended to resign, but without doing so, remaining pope ”.

How do the Bergoglian canonists counter-argue?

R. “Basically they say that even if the renunciation were wrong, it is validated by the unanimous and peaceful acceptance of Francis by the Church (“Universalis Ecclesiae Adhaesio”). A tragic mistake, because this doctrine was never intended to save, heal or consider satisfied the condition without which a proceeding could never be initiated. In the case of papal election, the see must be vacant: the reigning pope must have died or must have validly abdicated. For can. 126 (doctrine of substantial error) Benedict’s resignation was void, the seat was not vacant and it is impossible to remedy this substantial error a posteriori. It does not matter that the overwhelming majority of the Church believes that the Pope is Francis: even the Jews preferred Barabbas to Jesus,but they were wrong ”.

In the interview book “Latest Conversations” Ratzinger says he resigned like the popes who, in history, have not abdicated. WHO If he is still the pope, who is Bergoglio?

R . “At least one ANTI-POPE . Moreover, many believe that he is the False prophet of the Apocalypse ”.

Many think that after Francis a new conclave can put things right. Is that so?

R. “Absolutely NOT . A conclave with 80 cardinals appointed by an antipope can elect only one other antipope. Bergoglio’s entire succession line is anti-papal. There will no longer be an ecclesial restoration, but a descent towards the great apostasy of the visible Catholic Church, which will persecute the faithful “little remnant”, the true Church ”.

By the way, Don Minutella’s channel, the most followed priest in Italy and loyal to Benedict, has been closed by Youtube or hacked … HERE

R. “Exactly. They need to silence dissent and make use of the complicity of social networks “.

The Catholics who are scandalized by Bergoglio’s “reforms” and avoid asking themselves if he is the real pope … do they evade the “magna quaestio”?

R. “Yes. Unfortunately, on this line of thought there are principles of the Church such as card. Sarah and Müller, Archbishop Viganó, etc. that confuse many people ”.

In a recent interview Fr Francesco recommended not to waste the crisis, but to use it to establish a “new world order”. Should we also worry about the laity?

R . “Obviously: this project concerns everyone. In particular, the UN for decades has been promoting what Catholics think are “sins that cry to Heaven” such as abortion, euthanasia or gender ideology. John Paul II and Benedict XVI already denounced it. And now Bergoglio is perfectly united with the New World Order, atheist, anti-Christian and asks for obedience to the UN ”.

Why don’t bishops and cardinals address this issue? It is an enormous historical and spiritual responsibility …

R. “The architects of the New World Order now dominate the world and the Church. Informed cardinals and bishops fear causing a schism if they speak out. But it is absurd to think that Christ can want unity in lies, for this reason, in history, the heretics have left the Church, purifying it. Now the schism will reverse: it will be those who profess the Catholic Truth who will be expelled from the Church ”.

Cionci: We had already mentioned this possibility with the metaphor of the “cuckoo” HERE  For now the question continues to be swept under the rug, in a really curious way. There is an enormous difficulty in making a local mind trying to change point of view.Probably we will have to wait for the next stop of the modernist train, when also the Mass of the new rite, already tampered with, will undergo the next changes, predictably, with a view to eliminate the dogma of Transubstantiation as the historian Massimo Viglione explains HERE

When intercommunion with Protestants or even an international interfaith conference or something similar arrives to create the religion of the New World Order, then perhaps the most obvious of possible explanations will begin to be considered .