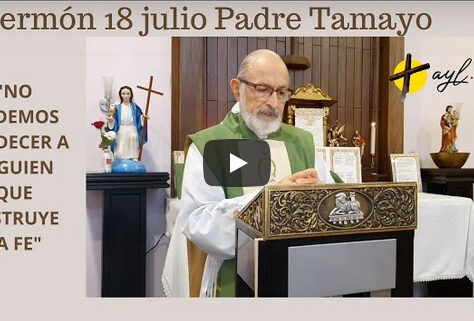 by our Special Correspondent in Latin America

Fr. Tamayo, an elderly priest from Costa Rica who has been serving as a sort of spiritual guide for the well-known Spanish Catholic Youtube channel “Adoración y Liberación”, had been struggling to publicly admit that Benedict XVI is still Pope.

He often said that he just wasn’t ready to go there, but today, in a homily in which he addressed the recent attack on behalf of Bergoglio against the Latin Mass and speaking of the controversies in the novus ordo, he said point blank:

“But in the document of the supposed pope “Francis”, and I say “supposed” because I am convinced that he is NOT pope. Benedict XVI remains Pope. And I repeat: because Benedict XVI only renounced the administrative aspect of the Pontificate. He did not renounce the charge (munus). And this is demonstrated by various jurists who have studied with canonical and juridical basis the text of the renunciation of Benedict XVI. And if Benedict XVI does not renounce the charge, then he remains Pope. He has conscience of this. He has conscience of this. He continues to be Pope. And there can only be one Pope. And he himself has said it in various opportunities. “Popes”, there is only one. And so brothers and sisters, if Benedict is still Pope, there is no reason to fear of what may happen. There is no reason to fear.” (Minute 12:25 – 14:12)