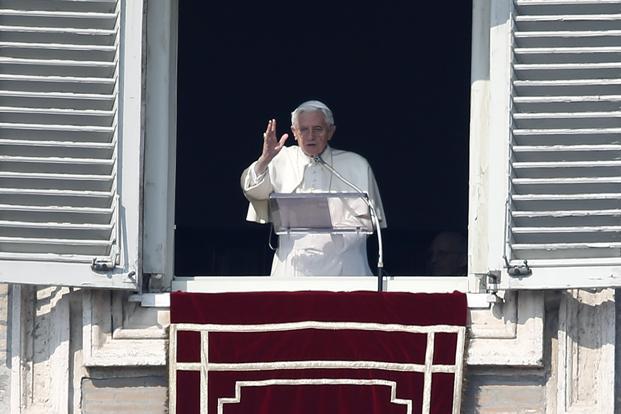 I think at last, we who follow Canon Law and recognize it places us under a divine obligation to follow its terms in a papal resignation, on account of the word of Christ to Pope John Paul II: Whatsoever you bind upon Earth, shall be bound in Heaven – A direct reference to all papal laws regarding the transfer of the Papal office — of which Canon 332 is the key in the present crisis — We, I say, who follow Canon Law, need to ask those who for 8 years, after countless speakers, writers, bloggers, journalists, priests, Bishops and Cardinals have talked on the matter, but still continue to refuse that he is the one and only true Pope: WHY DO YOU HATE BENEDICT SO MUCH?

Because there really has to be a strong visceral hatred of Pope Benedict XVI to prevent many Catholics who know of this controversy and have the time to read the evidence, to fail to do so and recognize him as the one and only true Pope, NOT only because the facts and the law are 100% in favor of Pope Benedict XVI still being the pope, but ALSO because returning to POPE BENEDICT XVI is the easiest, fastest, and most complete way to reject the claims and errors of Jorge Mario Bergoglio in his pretension to be pope!

Even Sedes, who want a strong argument could not find one stronger, less in need of private interpretation, more clear and effective.

So, I have to ask all those who insist Benedict XVI resigned the papacy, WHY IS IT THAT YOU HATE HIM SO MUCH THAT YOU DO NOT WANT TO RECOGNIZE THAT HE NEVER RESIGNED THE PAPACY VALIDLY?

Could it be one or more of these reasons?

But if none of these is the reason why you wont recognize Benedict XVI as the pope, even though he did not renounce the petrine munus as Canon 332 literally and explicitly requires, then please admit to yourself today, that you have NO reason for your perfidy but sloth and  irrationality. And what do you think that merits you before God?

Our Lady at La Salette told Melanie that at one point the Lord would be so angered at humanity that He will send His Angels and slay all His enemies. In the Apocalypse, the Horsemen wearing crowns (coronas) will kill a third of humanity.

Maybe, just maybe, all those who rejected Benedict and continue to embrace Bergoglio, the Vaxx preacher, are going to get the punishment they deserve?

Fear God, I say. And repent.  There is little time now. The Horsemen of the Apocalypse Cometh!

16 thoughts on “Why do you hate Benedict XVI so much that you do not want him back?”