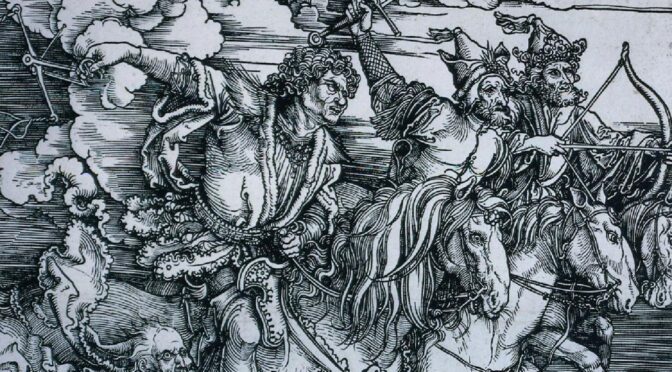 SCRIPTURE from the Douay Rheims Bible IN BLACK, Commentary by Br. Bugnolo in Red

1And the fifth angel sounded the trumpet, and I saw a star fall from heaven upon the earth, and there was given to him the key of the bottomless pit.

In 1908, a star fell to earth. Not a star in the modern astronomical sense of the word, but in the biblical sense.  It was named the Tunguska Event. It occurred on June 30, 1908 (06/30/1908) in Tunguska, Siberia, in the territory of modern Russia, which was then part of the Russian Empire. Today experts believe it was a comet. There were no human witnesses to the immediate event, but those in the vicinity even at great distances heard it, and there were definitive signs for years afterwards. You can read more about it here.

Now what this bottomless pit be, is explained in the next verse.

Thus, this bottomless pit to me seems to be a place of biological experimentation where there is no depth of depravity the scientists will stop at.  This pit, may be a real institute, or it may represent corrupted medical research. In fact, at the Rockefeller University in the early 1900’s they began testing vaccines and studying how to use them to kill off humanity. The menigitis vaccines developed there and administered by Dr. Frederick L. GATES, is now known to be the direct cause of the Spanish Flue which killed 20-60 Million in 1919-1922.

Meanwhile, in the last months of the Third Reich, Adolf Hitler, who was funded by the New York City Bankers, including Rockefeller, said that his party, which they created, would return in 100 years as a new religion. His party was founded in 1919.

But now we come to the Corona Vaccines, which were developed as early as March 2019 according to Dr. Martin patent investigation. A vaccine containing syringe to the Apostle John might seem to be a locust, because it has a stinger, and if you crush the syringe liquid comes out. They all look alike, and there are billions of them, and they travel in shipments (swarms).  That they come out of this bottomless pit, is obvious, since they are created by a medical industry which has no morals whatsoever, and as the Klaus Schwab and Bill Gates admit, are designed to genocide humanity.

These Vaccines were based on chimeric science, where parts of different living organisms are melded together.

7And the shapes of the locusts were like unto horses prepared unto battle: and on their heads were, as it were, crowns like gold: and their faces were as the faces of men. 8And they had hair as the hair of women; and their teeth were as lions: 9And they had breastplates as breastplates of iron, and the noise of their wings was as the noise of chariots and many horses running to battle. 10And they had tails like to scorpions, and there were stings in their tails; and their power was to hurt men five months.

The Vaxx campaign is faililng, because after about 5 months no one who has not yet taken it, wants it.  And what is the purpose of this campaign, to exterminate humanity, thus:

And they had over them 11A king, the angel of the bottomless pit; whose name in Hebrew is Abaddon, and in Greek Apollyon; in Latin Exterminans,

12One woe is past, and behold there come yet two woes more hereafter.

And now for the next woe, which will be God’s punishment upon all who took the vaxx willingly.

So watch carefully the news from Mesopotamia. The Horsemen cometh, and they cometh from the Euphrates river.

15And the four angels were loosed, who were prepared for an hour, and a day, and a month, and a year: for to kill the third part of men. 16And the number of the army of horsemen was twenty thousand times ten thousand. And I heard the number of them. 17And thus I saw the horses in the vision: and they that sat on them, had breastplates of fire and of hyacinth and of brimstone, and the heads of the horses were as the heads of lions: and from their mouths proceeded fire, and smoke, and brimstone. 18And by these three plagues was slain the third part of men, by the fire and by the smoke and by the brimstone, which issued out of their mouths. 19For the power of the horses is in their mouths, and in their tails. For, their tails are like to serpents, and have heads: and with them they hurt.

Slightly more than one third of humanity has now taken the Vaxx willingly. And in the secret which Our Lady revealed to Melanie, Our Lord to punish “His enemies” will send His holy angels to slay them all. Whether by supernatural intervention or by sending a common cold which will kill those whose immune systems have been destroyed by the Vaxx, I do not know.

This last is a warning to all of us who have not been vaxxed. We need to do a lot more than simply staying in good physical health. We need to repent of seeking and adoring anything else, but the Most Holy Trinity of the Father, of the Son and of the Holy Spirit. Get  yourself right with God. Make a good confession, as it may be your last.