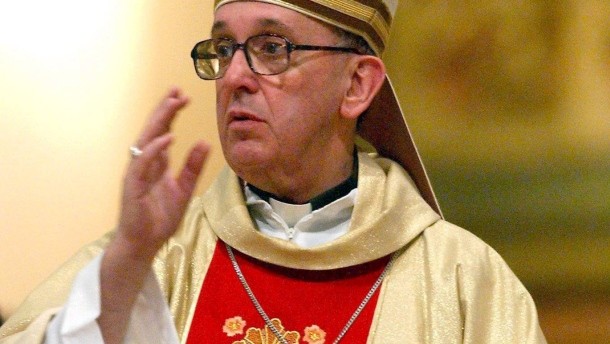 THE NEW CONDEMNATION OF PROSELYTISM BY Jorge Mario BERGOGLIO

Very recently [on 3 August 2021 (1)] Jorge Mario Bergoglio has once again reiterated his condemnation of proselytism. The new condemnation, however, has seemingly been received once again in  general silence and indifference, even by traditionalist sites or those who profess (in words)  such! This is to take the stand against what appears nothing less than as a blatant attack to  Christianity!

THE ATTACK TO THE CHURCH’S FOUNDATIONS

It is in fact the pretext – implemented by Bergoglio – to attack once again the very  foundations of the Church! Pretext with which he is carrying out none other than his main  heresy, that of new Gospel and the multi-religion that Bergoglio himself has been  implementing since 2013!

So what does this heresy consist of and what is its connection with his repeated (two days ago)  condemnation of proselytism?

A well-known claim of Bergoglio, which emerged from the beginning of his pseudo pontificate, is that of distinguishing between evangelization and proselytism, terms to which  he himself gives peculiar meanings, the second in a morally negative sense and therefore –  always according to the peculiar Bergoglio’s opinion – condemnable. The difference, again  according to Bergoglio, is that while evangelization should consist in the mission of simple  “proclamation” of the Catholic faith without demonizing other religions and without trying to convert non-Christians “at all costs”, proselytism, always according to the now, would aim to  convert “by attacking the faith of others and liquidating it as a simple heresy or lie, if not as  the work of the Devil”.

CONNECTION WITH THE HERESY OF THE MULTI-RELIGION OF ABU DHABI

But the two sentences in italics mentioned above (original text from Bergoglio) are in reality  ambiguous and imply much more. In fact, Bergoglio’s position clearly emerges in his  declaration at Posillipo (2), where Bergoglio even went far beyond what was declared in the  Constitution Veritatis gaudium “(3). Indeed, he defined proselytism not only an error but a  “plague”, that is, the worst of diseases. He strongly claimed the document signed with  Muslims in Abu Dhabi (4), which states that the presence of many different religions on Earth  would even be “willed by God” (sic!).

From this it emerges clearly that proselytism is not, in reality, the real (Bergoglio’s) problem.  Rather, it is that of the implementation of the conversion to Christianity. In fact, according to  Bergoglio, this would even be an act contrary to God’s will!

This is clearly a radical falsification that blatantly violates the Depositum Fidei, that is, the  Catholic faith represented by the Gospel and by the Church’s two-thousand-year tradition. In fact it contradicts and openly precisely the fundamental commandment of Our Lord Jesus  Christ:

“Go therefore and make disciples of all nations, baptizing them in the name of the Father and  of the Son and of the Holy Spirit, teaching them to observe all that I have commanded you.”  (Mt. XXVIII, 19-20);

“Go into all the world and preach the gospel to every creature. Whoever believes and is  baptized will be saved, but whoever does not believe will be condemned ». (Mk. XVI, 15-16).

The obvious conclusion is that Bergoglio wants to replace the Depositum Fidei itself with a  totally new and unpublished gospel. But above all in contrast with the teaching of Jesus Christ and therefore not only heretic but antichrist!

It is therefore on the part of Bergoglio his attempt:

– to rewrite none other than the Gospel itself, altering and even overturning the  commandments of Jesus Christ! (HERESY OF THE NEW FALSE ANTICHRISTIC GOSPEL)

– to set up a new false church based on its multi-religion claim, actually atheist, Masonic and  therefore satanic! (ABU DHABI’S MULTI-RELIGION HERESY)

(2) Speech of 21 June 2019 by JM Bergoglio at the Faculty of Theology of Posillipo  (NA), https://roma.corriere.it/notizie/cronaca/19_giugno_21/lectio-papa-francesco-napoli-sia avamposto-mediterraneo -laboratory-theology-ffcb1e46-940a-11e9-bbab-6778bdcd7550.shtml.

8 thoughts on “Once again, Bergoglio has pertinaciously denied the Dogma of the Faith on the necessity of Conversion”