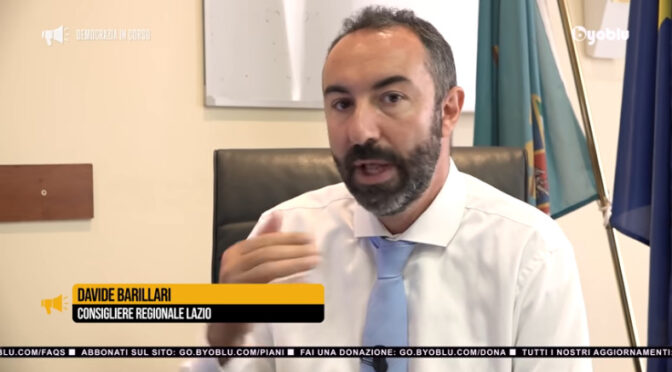 Rome, Italy — July 29, 2021:  “It is not a civic duty to vaccinate yourself, its a moral duty to inform yourself” before taking an experimental therapy, says Councillor Barillari, former Five Star Party Member and former candidate for the Presidency of the Italian Region Lazio, which comprises the capital of the former Republic, at Rome, which came to an end with Giuseppe Conte’s unconstitutional declaration of a state of war against a virus, as the excuse to cancel all human and constitutional rights.

“In fact, we do not have a pandemic, we have an infodemic, in which every day we have a journalist shouting terror” to convince everyone to take the Vaxx, say Barillari.

“We want to ask questions”, says Barillari.  He says that all those who ask questions are persons who are intelligent and conscientious persons.

In this video, Davide Barillari gives a press conference on the danger of the Death Vaxx. To make his point he opened with the theatrical gesture of a person pointing a gun at his own person: to compare the Vaxx with Russian Roulette.

Barillari is leading the crusade against the conspiracy against the people being pushed by the entire political class of Italy. In this conference he reports that there has been 80,000 adverse reactions to the Vaxx in Lazio, alone!

He further says that there has NEVER been an independent scientific and qualified study or review of these experimental therapies.

He then lists the actions which he has undertaken and aims to undertake to defend the people of Lazio.

He fought a legal battle to get this information.

There is a complete lack of medical assistance and surveillance of those who are given the Vaxx.

400 have died after taking the Vaxx in Lazio, but the reason is always given as something else or inexplicable. There is a dogmatic presupposition that the Vaxx cannot cause harm, therefore it cannot be a cause.

His official request for information obtained 300 pages of documentation on the results of the Vaxx, which say that the Government of the former Republic are outright liars and fraudsters denying the facts.

Here are some screen shots: 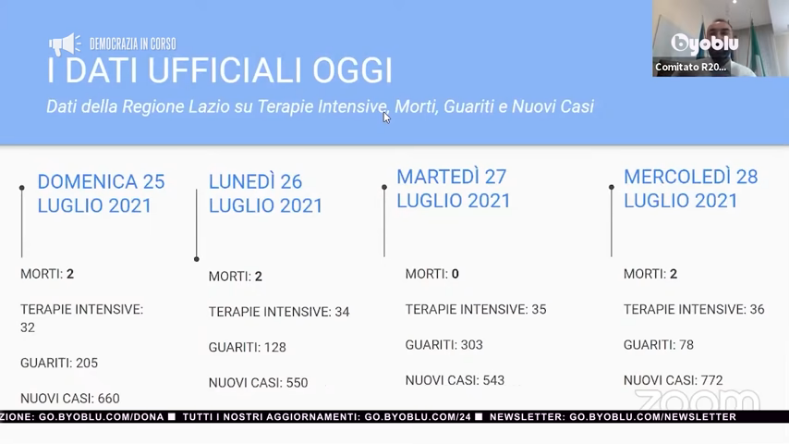 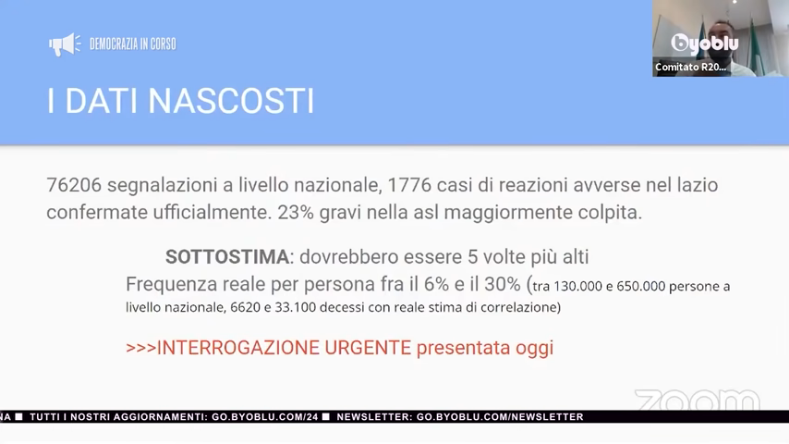 He has discovered that in Lazio there is a falsification or lack of documentation of adverse events which are at least 1% in the Piedmont, but only 0.03% in Lazio. 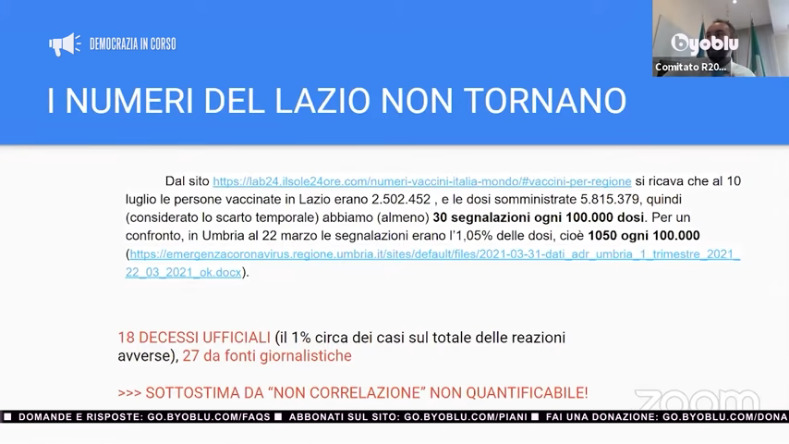 There are 300 pages of adverse reactions in the information that Councillor Barillari received from his information request to Aifa, the Italian Vaccine Authority.  This information is being suppressed not only by the Government and Government agencies but also by the Media in Italy, with few exceptions.

Moreover, 3800 emails were sent to every member of government and parliament since March, demanding this information and no one received a response!

Finally, Barillari announces that he will oppose every legislative action in the Lazio government until 2023 with the demand that the people be heard on this issue.

He is proposing a law for the Region of Lazio which will address the conspiracy to hide the information he has sought regarding the past and which each person considering the Vaxx has a right to know.

Here is a screen shot of the proposal: 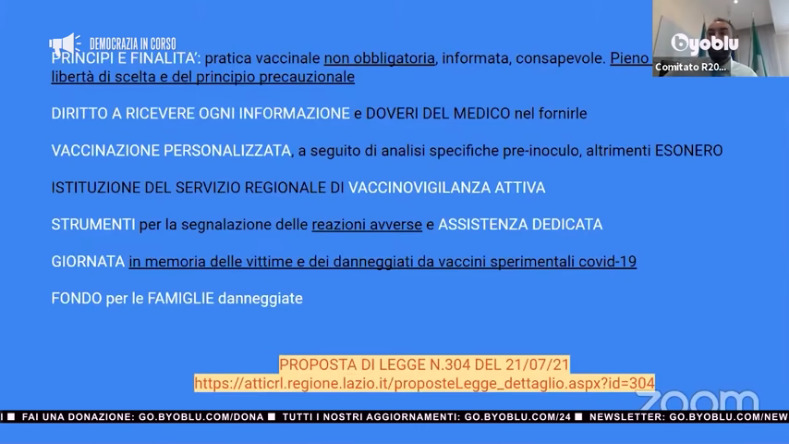 The President of the Regional Council in response has denounced the Councillor to the police for threatening public safety (by using a gun as a prop)!  This act, by the regional President, is the kind of Pharasaical hypocrisy which is the essential religious act of the Plandemic and New World order. 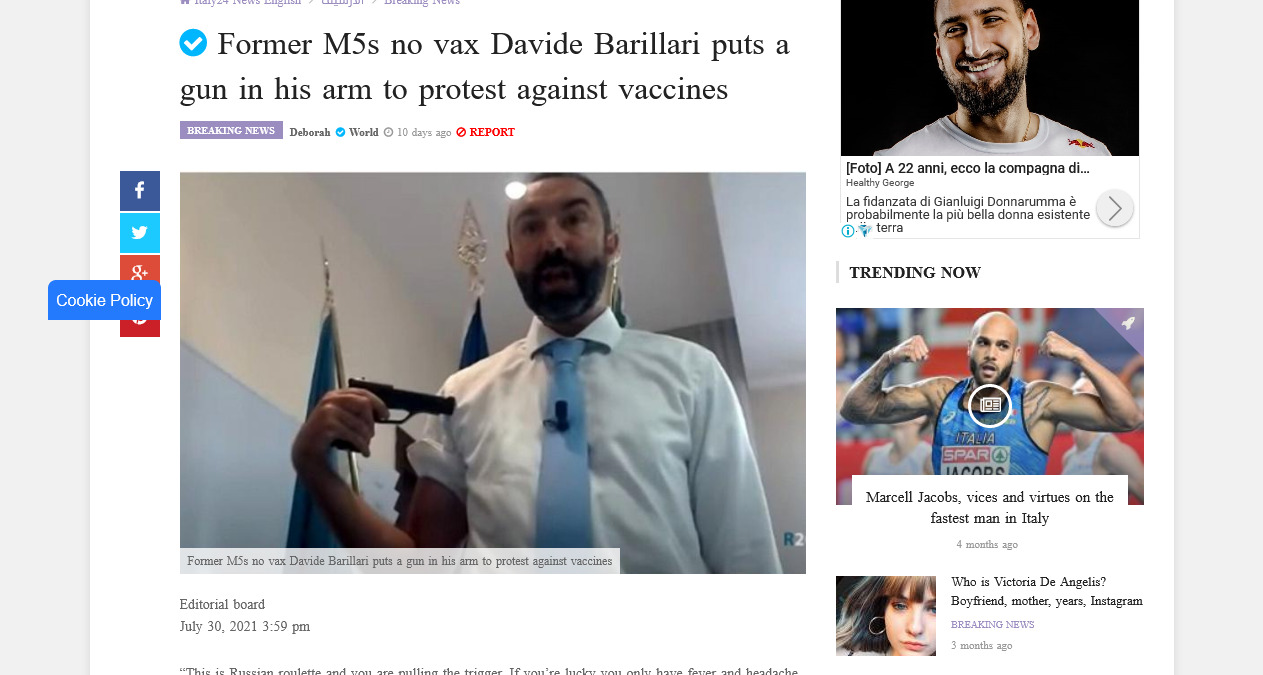