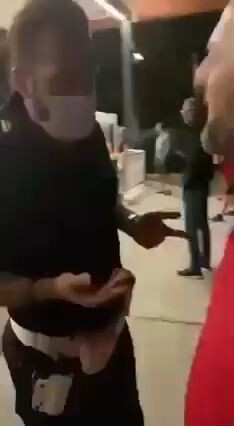 Seen here in a rare published clip of the Italian municipal police, in a yet unidentified town, violating the constitutional and civil rights of an Italian citizen, when using armed force, in a band, they arrest him with handcuffs for not showing a Vaxx Passport, even though he affirms to have done a PCR test by swab that morning. Article 9, section 9 of the current DPCM requires only that a citizen be asked, but specifically forbids that he be discriminated against. He could be fined for a misdemeanor — which would have no force in law — however, he cannot be physically assaulted or handcuffed. Also, the police cannot ask his personal information unless he is violating a law, and the Vaxx Passport is not a constitutional provision of the law, since there can be no state of emergency without a military conflict on Italian soil, and thus, the legal presupposition for it does not exist.  Still this video shows how local police in Italy are turning into the Gestapo by the political insistence that they enforce the will of the Draghi government, even beyond the terms of its written decrees.

The police also violate the current decree, which does not require the Green Pass in public parks, but only in cultural events in enclosed areas or where masses of people are gathered.  This is thus, clearly being done to terrorize the general public.

The error of this citizen was not exercising his constitutional right to go limp and require the police to move him, which on account of weight and the distance to the parking would have required 6-10 persons.