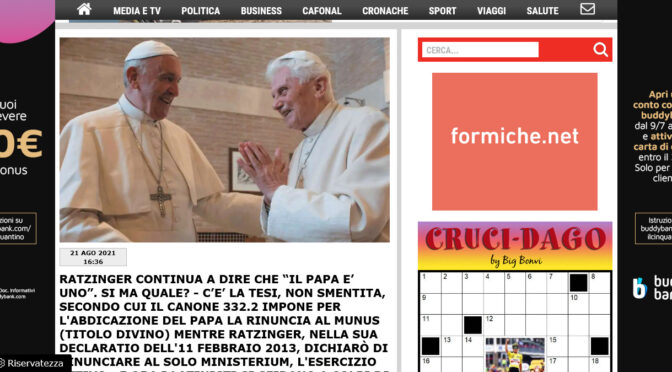 While the controlled opposition in the English speaking world has studiously and dogmatically eliminated all discussion of the validity or invalidity of the renunciation of the Papacy signified in Pope Benedict XVI’s Declaratio of Feb. 13, 2013, the topic has burst upon the Italian press in numerous articles in just the last few days.

Here is a review of the reports, first with an image linked and then with a short commentary by myself.

I Dolimiti:  From the Denial of being in the Hitler Youth to the silence on the “Plan B”: why does Ratzinger not intervene to clarify? 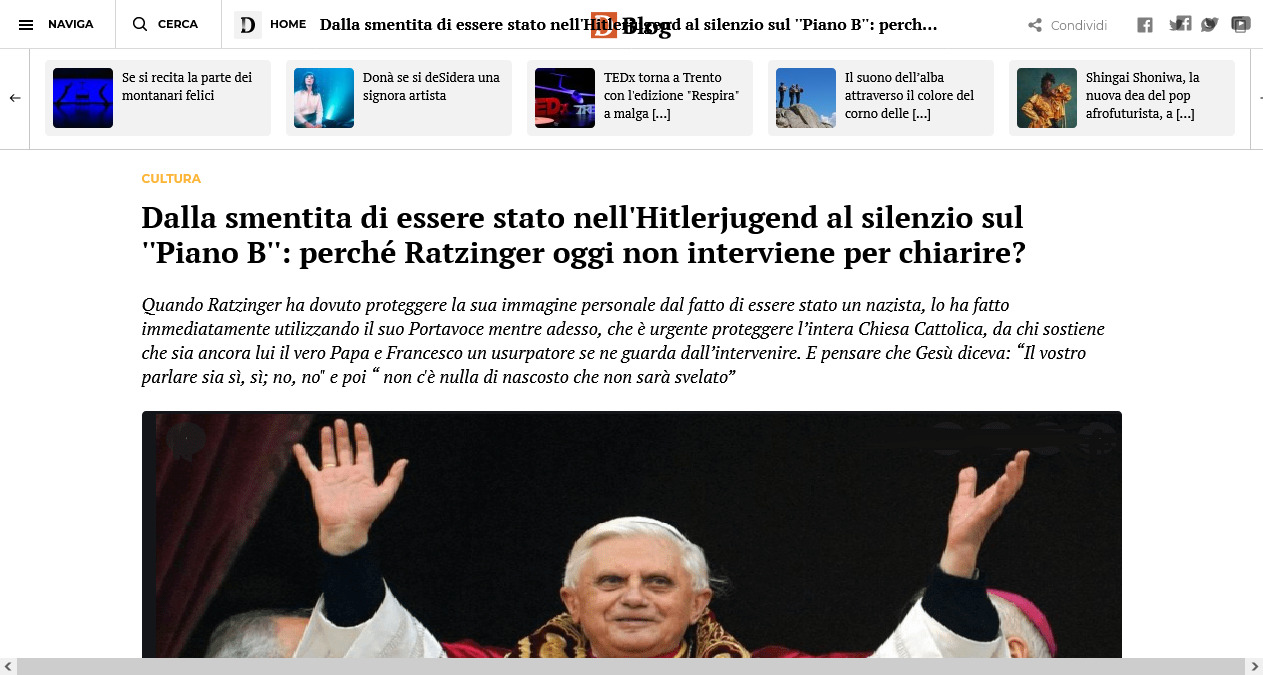 The above is the article by Petroni which appeared in I Dolimiti, an electronic journal in NE Italy, along the Austrian border where many Italians speak still the German tongue.  While he ridicules Andrea Cionci’s Plan B theory, about the intentions of the Declaration being invalid, he gives Cionci an assist by saying, if Cionci and those who hold this are wrong, then Benedict should intervene. Why doesn’t he?

Roma.it: The Resignation of Benedict XVI: Our Shocking Discovery re-launched by the Libero 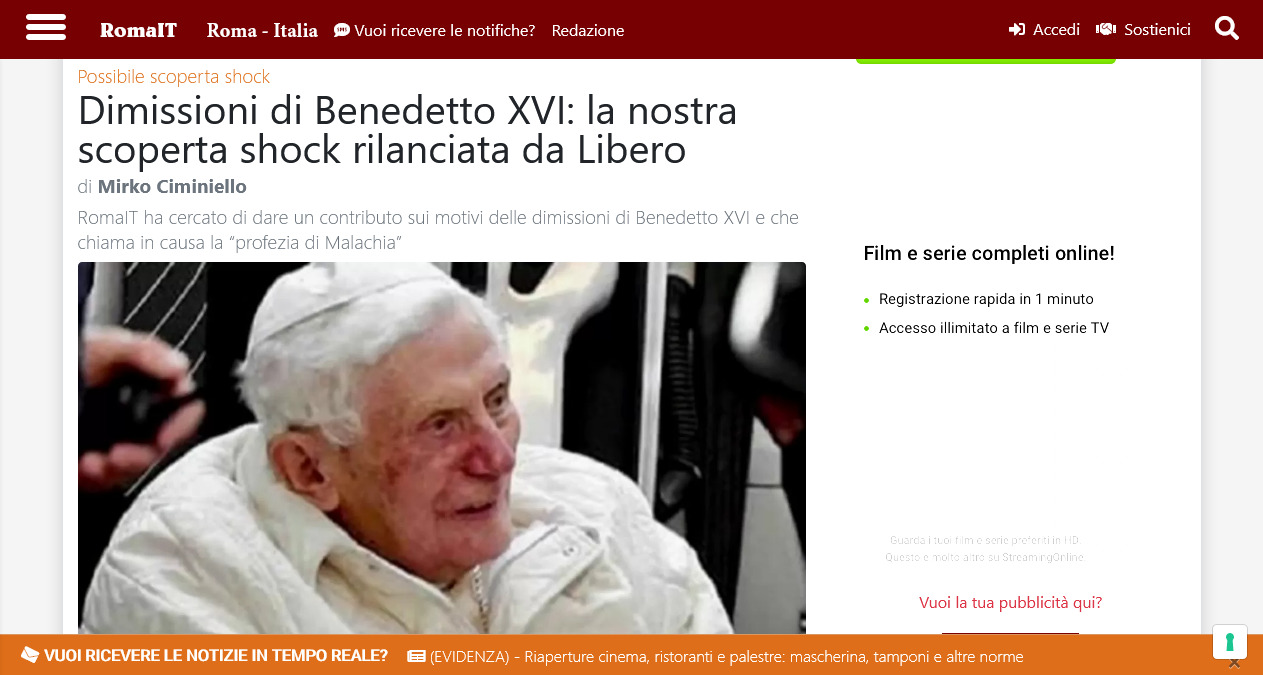 In this article, Mirko Ciminiello who discovered the discrepancy in the response to the question posed to Benedict XVI by Peter Seewald, his official biographer, in regard to the Profecy of St. Malachy, lauds the fact that Cionci heard what he had to say and confirmed it yesterday in the pages of the Libero: namely, that Benedict XVI who is named as the penultimate before “Peter the Roman”, says explicitly that he is the last pope, and that therefore means that he regards “Peter the Roman” either someone who is an antipope or not elected by Cardinals. Which does not fit well with Bergoglio’s claims by any reckoning whatsoever.

Dagospia.it: Ratzinger continues to say that the Pope is one, but does not say which is the one… 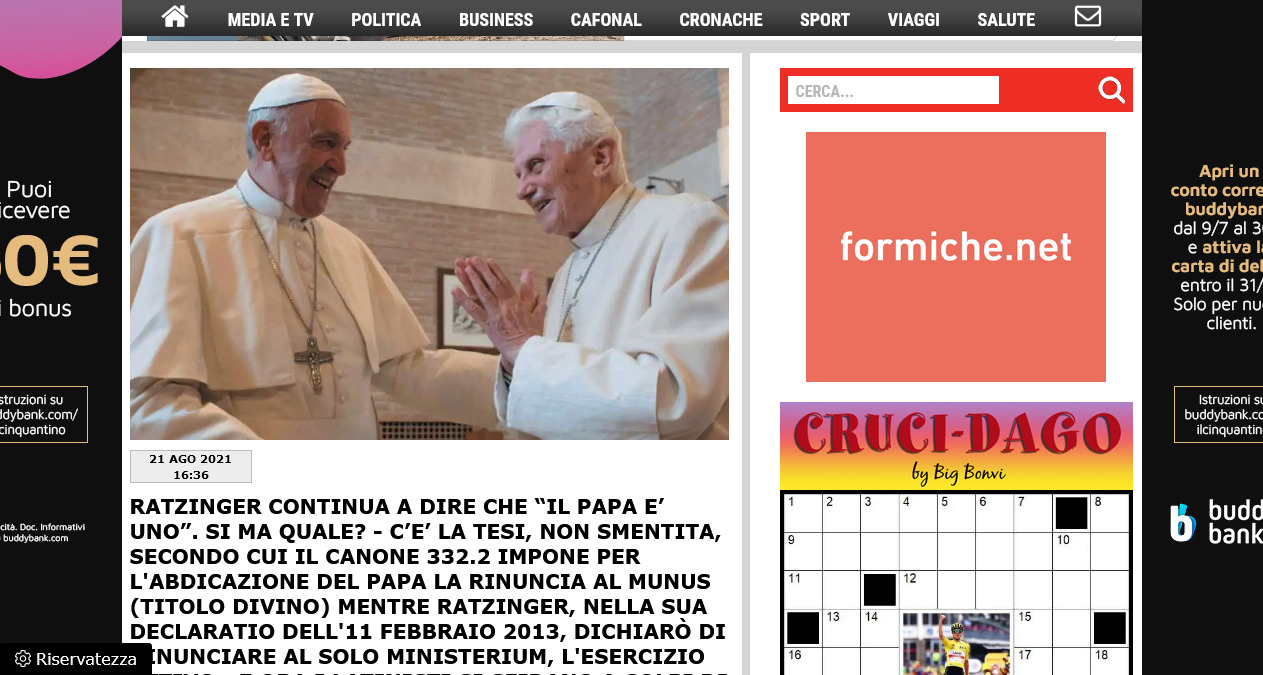 Dagospia is a highly influential and very popular news site in Italy. If the news breaks on that platform, it means that everyone in Italy is talking about it or will be. And this article recites approvingly the investigations of Andrea Cionci, so it is a quasi certain now, that the Vatican will be seen has having something to hide if it remains silent.