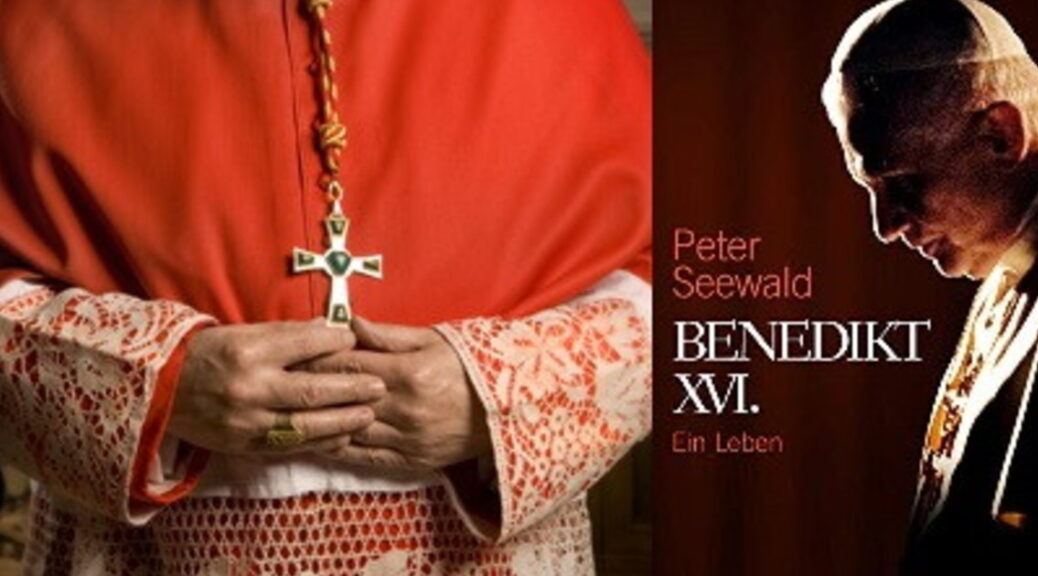 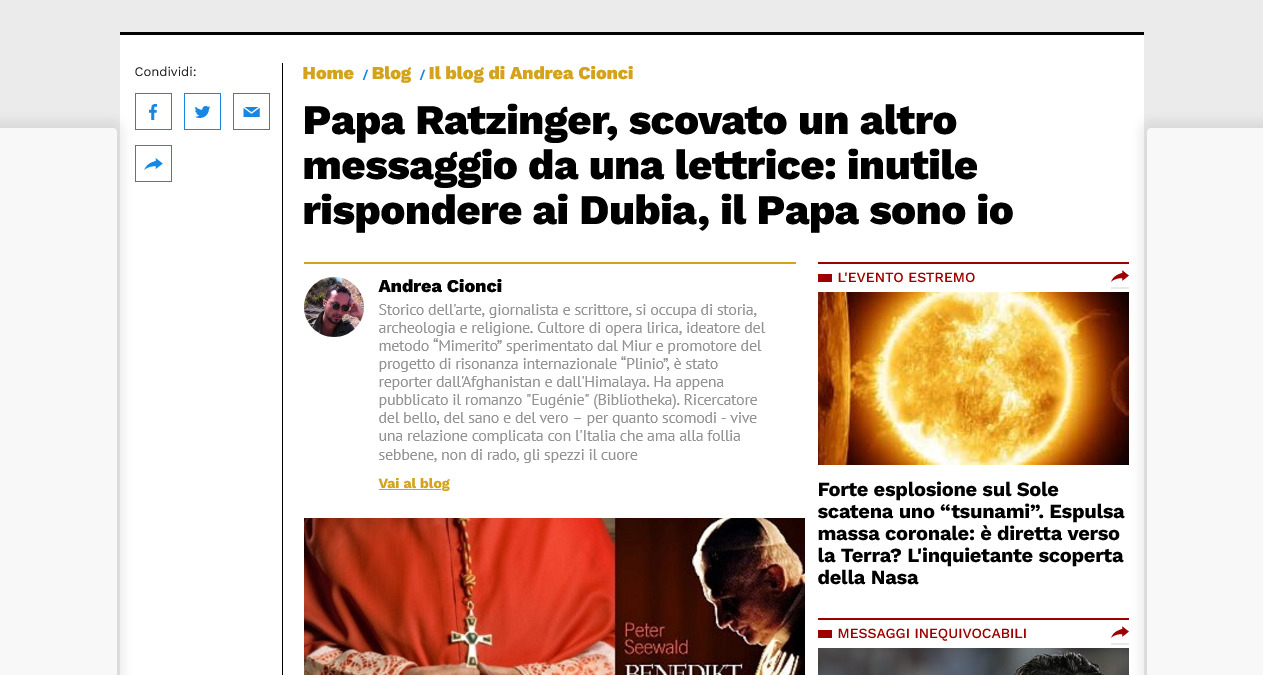 Authorized English Translation of the Italian Original (click image above)

So, something is finally coming out in the press. Dagospia HERE and RomaIT HERE have broken the embargo. Yesterday, even my colleague Francesco Antonio Grana of Il Fatto Quotidiano mentioned HERE the inevitable flowering of theories about an “occult pope”.

Dear Colleague, if you will have the goodness to read, HERE and HERE you will see that we are a piece ahead beyond the vociferations and theories: there are university professors, lawyers, magistrates, theologians, canonists Latinists, jurists who have analyzed the alleged renunciation of Pope Benedict and have confirmed, recently using the same categories of pro-Bergoglio canonists, that the Declaratio of 2013, interpreted as a renunciation, is non-existent and that instead it fits precisely to a declaration of “SEDE IMPEDITA”. These statements are not denied by anyone as of last March. HERE It would be interesting and useful for our readers to address the issue in the canonical merit instead of barely touching it, suggesting that it is only “gossip”. We are available for a cordial discussion.

In the meantime, many readers have already gone further and, by participating in the investigation, have pointed out other facts and documents that further confirm how Benedict XVI has factually – and not juridically, because it is impossible – ONLY renounced the practical exercise of power, due to the fact that no one obeyed him anymore and that he could no longer use his mail, intercepted and stolen (Vatileaks). In this way, he remained that one legitimate pope of which he has been speaking for eight years without ever explaining which HERE .

A reader – who wishes to remain anonymous – pointed out to us today a passage from the interview given by the Pope to Peter Seewald in the volume “Ein Leben” of 2020. Another decidedly clear message.

In fact, when Seewald asks Benedict to comment on Bergoglio’s failure to respond to the four Dubia of the cardinals on the encyclical Amoris laetitia, (about communion to remarried divorcees) Benedict does not answer directly, but refers back to his last public audience of February 27, 2013, one day before the entry into force of the sede impedita announced in the Declaratio. In the text of the audience HERE there is, in fact, NO RESPONSE IN THE MERIT OF THE DUBIA of the cardinals: there is no mention of either divorcees or the Eucharist, but there is a very clear message that he has NEVER ABDICATED. That’s why you can find an answer in that hearing: all the issues that arose later around Bergoglio, including the Dubia issue, count for nothing, as Francis is not the pope, because Benedict remained THE pope.

Don’t believe us? We copy in full. Pay attention to the sentences in bold that we will explain below.

Seewald: “Cardinal Raymond Burke – one of the four authors of the Dubia, the writing in which they formulated some doubts about the pontiff’s apostolic exhortation Amoris laetitia – said in November 2016 that Amoris laetitia had created confusion: ‘There is a tremendous division going on in the Church and this is not the way the Church is used to going.’ Pope Francis has not responded to the Dubia. Would it be better for you to do so ?

Benedict XVI: “I prefer not to take a direct position on this last question, because this would mean entering into the concrete questions of the government of the Church and abandoning the spiritual dimension to which my mandate exclusively pertains. If I answered, I suppose that all those who constantly attack me for my public statements would see their slander confirmed. I can therefore limit myself to referring to what I said on February 27, 2013 in my last public general audience. In the midst of all the torments that afflict humanity and the disturbing and destructive force of the evil spirit, one will always be able to recognize in the Church the silent power of God’s goodness. The obscurities of successive historical epochs will certainly never make it possible to enjoy undisturbed the pure joy of being a Christian […] But in the Church and in the lives of individual Christians there are always moments in which one can sense deep down that the Lord loves us, and this love means joy, it is ‘happiness'”.

Then, as we have already seen, the government of the Church, the ministerium, is no longer his, he has abandoned it to himself, leaving the See FREE, EMPTY (and not vacant as the Vatican has translated the verb “vacet”: it is canonically impossible for the See to remain vacant with the renunciation of the ministerium). Thus, the government of the Church is now in the hands of others. Recently, colleague Mirko Ciminiello discovered that Benedict makes it clear to us HERE that he does not recognize Francis as the legitimate pope, since he does not consider him as his successor in the list of St. Malachy’s popes.

The spiritual dimension is precisely the munus petrino, the title of pope granted directly by God that he KEEPS.

The slanderers are those who always criticize Benedict, because “although he resigned as pope continues to intervene with interference in the pontificate of Francis. They are backbiting simply because HE HAS NOT ABDICATED and continues to be the pope, in full right to intervene.

The silent force and warning deep down are a clear reference to the fact that those with ears to hear and eyes to see understand the situation.

And now we come to the climax, when Ratzinger sends the interviewer back to look for answers to the Dubia of the cardinals in his last general audience – “public” – he specifies, perhaps because afterwards he continued to give private audiences, always as pontiff?

And here is what he declared in the last audience, reported in full by the Vatican website HERE As you will read, one cannot find the slightest hint that he could answer the Dubia on divorce and Eucharist, except in a more general, higher sense above all definitive.

“I have taken this step in full awareness of its gravity and also novelty, but with a profound serenity of mind.”

What novelty? As many as 10 popes in history have abdicated, so his would not be a novelty at all. Unless he refers to what he said HERE: “(Like me, ed.), no pope has resigned for a thousand years and even in the first millennium was an exception. We have seen, that his reference is to the only pope who in the first millennium was driven out by an antipope, losing the ministerium, like him, but remaining pope in all respects. The NEWNESS, then, is in the fact that he voluntarily and freely abandoned to himself the government of the Church, because of impossibility in managing it.

“The gravity of the decision was precisely also in the fact that from that moment on I was committed always and forever by the Lord […] The “always” is also a “forever” – there is no longer a return to the private. My decision to renounce the active exercise of ministry does not revoke this. I do not return to private life, to a life of travel, meetings, receptions, conferences, etc. I do not abandon the cross, but I remain in a new way with the Crucified Lord. I no longer carry the power of office for the government of the Church, but in the service of prayer I remain, so to speak, in the enclosure of Saint Peter.”

Rather explicit, we would say: he remains pope forever, because he has not renounced the title of pope, the munus. He has become a “hermit pope” and not emeritus, since the institution does not exist, as we have seen HERE

“I ask you to remember me before God, and especially to pray for the Cardinals, called to such an important task, and for the new Successor of the Apostle Peter: may the Lord accompany him with the light and strength of his Spirit.”

Here again, Pope Ratzinger is not referring at all to the 2013 conclave, which was illegitimate since he had not abdicated, but to the NEXT REAL CONCLAVE that upon his death, or valid renunciation, will have to elect the next real pope. We have already seen this specification by analyzing the Declaratio as “sede impedita” HERE .

The usual people will continue to say that these are tendentious readings, forcing etc.. The problem is that these tendentious readings now number about thirty cases, logically unexceptionable, are not disproved by anyone and have precise canonical responses. Soon we will publish a complete list with the opinion of specialists.

But those who renounce to LOGICAL THINKING will not want and will never be able to understand anything about this matter.

This is a confirmation of the previous report, entitled, “Pope Benedict XVI: I have not abdicated“