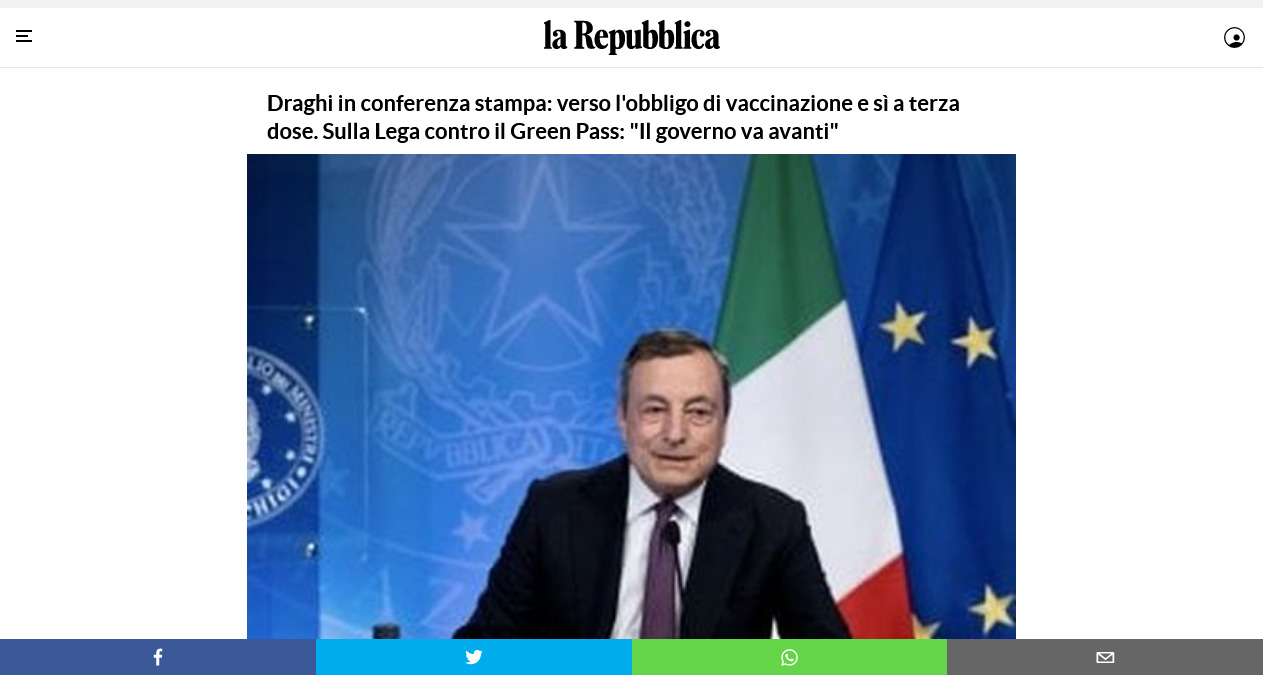 In a move which surprises no one, but those who do not read FromRome.Info, Mario Draghi, the Italian Prime Minister (Official Title: President of the Council of Ministers) affirmed explicitly today that his government will seek to make the DeathVaxx obligatory and to require a 3rd dose for a valid DeathVaxx Passport.

FromRome.Info reported on this back in May, in our article, “Civil War in Italy, as Dictatorship declares Vaxx obligatory for all“.  While our report has been attacked as Fake News, it was 100% accurate, as today’s news proves.

FromRome.Info also reported on the fake opposition organizing protests in Italy. The purpose of these is now revealed. Draghi announced that his government would move forward because of the Flop of these protests.

This news followed the decision announced last night to make the DeathVaxx passport obligatory for all regular commercial transport of passengers in Italy or in Italian waters.  This is obviously to prevent any political opposition from moving around the country, unless they have their own private planes or boats.

The intention to make the DeathVaxx obligatory for all residents, however, will certainly increase to a whole new level the dissent and opposition to the Government. There is no way in Italian law to make a medical treatment obligatory, without a change in the Constitution, which the electorate would never approve. So, I predict that if this is the intention of the government, that they will resort to Martial Law, and to justify this, that they will begin to have their secret services begin to execute false flag attacks around the country: such as burning down Vaxx Centers, destroying Vaxx warehouses, assaulting proVaxx politicians, blocking hospitals, and perhaps resort to the terrorist campaigns of the 60’s and 80’s, when CIA/Italian Gladio Assents threw bombs into supermarkets and placed them on commuter trains to make the voters fear the “Red Threat”.

In Italy, it is a felony to insult the President, make a fist, or hold a political assembly bearing arms. It is even a crime of sedition, if you meet with more than 8 other persons at a time, and discuss opposing the Government’s laws.

Pray for Italy. Much Darker days will follow, for sure.