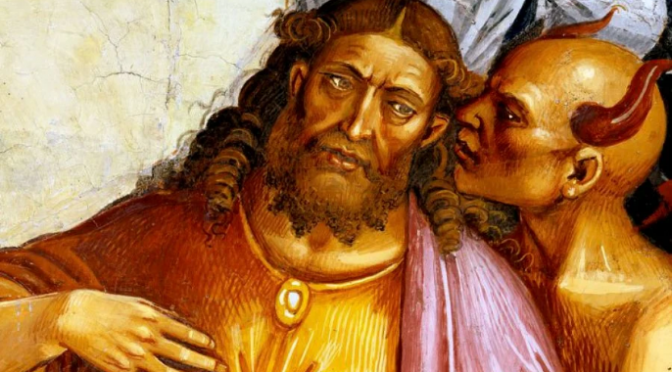 Modernism is the refined atheism of the unbelieving cleric — as one Catholic English novelist penned about a century ago. And this maxim proves true today.

Many have railed against modernism in traditional or conservative circles, but many have ended up practicing modernism with a satanic devotion.

Modernism ignores or denies that God exists, but it is sufficient to ignore God to act like an atheist.

The Modernist acts as if God did not exist or does not make a difference. The modernist in practice will say it does not matter a cause is just or for the Catholic Faith, because he holds that in practice there is no power but the power of men and devils.

For this reason, I charge all who name Bergoglio in the Canon of the Mass as the Pope as modernists.  And I can establish the charge as valid because:

1, They act as if Christ never said, “Whatsoever you bind upon earth, shall be bound in Heaven” to St Peter and His Successors.  Now clearly the Scriptures testify that Christ said this. So either they must not believe Christ existed or think that Scriptures contain myths, or that Christ is imaginary and does not know or care what is in Canon Law.

3. They act as if in the worship of God it is irrelevant if the one offering is honest or not, in the state of grace or not, or blasphemes or insults God to His Face during it.  Now this can only be if they do not believe God exists at all.

4. They act as if words have no objective meaning other than the consensus of men, such that there is no objective meaning of any law and thus no real crime or sin, other than by the consensus of men. But this denies that the moral order exists outside of the human mind, and thus it denies that God exists or is a Spiritual Being who is Truth and regards truth and justice alone.

5. They do not give a damn about the salvation of souls understood in the way the Church has always preached and sought it. They think the most important religious act is publicly professing yourself to be righteous, so they insist you keep receiving Communion regardless of your state of soul or their state of soul. Whether you are a public sinner by sodomy or divorce or being in communion with a heretic who approves these, it does not matter. The only thing that matters is that on Sunday you show yourself to be a hypocrite.

And such are the sins of those who name Bergoglio, the manifest, public, pertinacious heretic and uncanonically elected fraud. Because Benedict XVI never renounced in accord with canon 332, Benedict is still the Pope and Bergoglio never was.

But these mock God to His Face during mass and offer their spotted damnable sacrifice of praise in the name of a man who reigns over a hotel of prostitutes and thieves. This is to spit in the Face of the Living God. And they have the boldness to call you a sinner if you do NOT join them in doing the same!

And none of these can be excused because of the fear of losing friends, paycheck, approbation etc., because no one can place any created thing or even all created things before the Living God in importance.

Modernists are thus the perfect servants and preachers of the Antichrist, because they exalt the denial of Christ over loyalty to Christ.  They may not do this yet with words, but they do it loudly with actions.