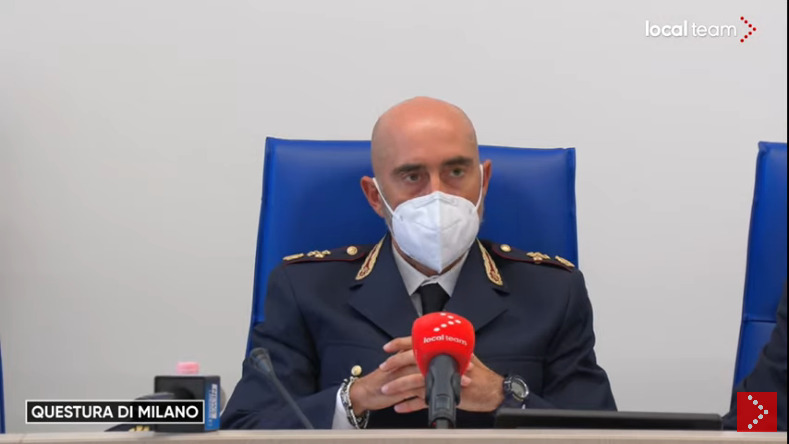 This is the official press conference of the Questura of Milan on the Matter.

The 8 persons who had no political affiliation were arrested after having made repeated violent threats on multiple online chat channels and encouraged members to acquire arms for the purpose of organizing violence during a no-Vaxx protest at Rome, against journalists with molitoff cocktails and the centers of power.

They were arrested for conspiracy to commit terrorism on the grounds that they were acquiring arms to execute their attack on September 11 and 12th, here at Rome.  They were found with pistols, pepper spray, chains and other lawful possessions. They are described as having the opinion that journalists and politicians took a fake vaccine.  They are accused of holding that the Vaxx is a lethal poison to be used against the masses and is a genetic serum, and that the government is preparing Concentration Camps. They are being identified by the Questura as conspiracy theorists and no vaxxers.

The searches were conducted this morning, after a long monitoring by the Italian Post Office of numerous social media channels, private and public, for their dangerous opinions.

There are 5 men and 3 women who have been detained: 2 from Rome, 1 from Bergamo, 2 from Milan,  and 2 from Emilia Romana. The leader is Milanese, 45 years of age.  The co leader is a woman from Rome who is 48 years of age.

They had been under observation for about a month. They had planned ultimately to take over a government building. Only the man from Bergamo was found with firearms, 2 pistols, for sport use. One from Venice had had a license but it was previously revoked for “psychological reasons”. The two members who had license to bear arms had their licenses revoked immediately. No one was found with an unlicensed firearm.

The group called themselves “warriors” and were identified as meriting particular attention because they had professed the decision to undertake an attack at Rome with acts of violence. They also contacted one another by phone. Their computers had been used to seek to acquire arms.

They were arrested by the Anti-Terrorism Unit of the Italian State Police. The charges appear to be “criminal conspiracy” for “terrorist purposes”.  It is not clear if they were under observation by Police agents or whether they were denounced by pro-Vaxxers who infiltrated non-Vaxx social media channels.

They are described as being non-political, never known to have been present at a political protest — a statement which affirms implicitly that the Government identifies and watches those who use their constitutional rights to freely assemble for political reasons. But at the end of the conference, the lead State Policeman extended the suspicion to all citizens by saying, that they had no evidence that they had never attended a protest, only that they they had no evidence at present that they were present.

This arrest follows the prediction of FromRome.Info that the Government will undertake the arrest of members of the no-Vaxx movement as “terrorists” so as to justify the imposition of Martial law through a narrative of threats.

This arrest shows clearly that Italy is a total ideological dictatorship, where everyone is being watched on line IF they are political dissidents of any kind. The Questura went to lengths to characterize the individuals, between 40-50 years of age, as being “common citizens” without political affiliation to spread the propaganda of threat and hatred against the largest group of Italian citizens possible.

Indeed, I fully expect that all sources of information they accessed will now be labeled “terrorist promoters”, so expect to see massive waves of censorship justified on the basis of this and other similar or simulated arrests.

As president of Ordo Militaris Inc., a US Corporation dedicated to anti-terrorism, I believe charging these individuals with terrorism or planning thereof is a propaganda tactic. From the information I have gathered solely through this press conference, it appears rather that they were planning an armed micro-rebellion in good faith against a government which has publicly declared its intention to vaxx everyone in Italy, even though numerous sources throughout the world have established that the Vaxx is lethal and deadly. Obviously if they only intended to occupy a government building — with 8 persons even that would be a challenge — their purpose was not terroristic.  Terrorism consists in the killing and maiming of innocent bystanders to advance a cause. That was not their goal nor intention.

It is clear, thus, today, that in Italy, this morning, free speech, free thought, and free association in opposition to the Plandemic has been declared outlaw and that the Government will proceed to arrest, bit by bit, increasing numbers of dissidents, with definitions more and more capable to ensnare them all.