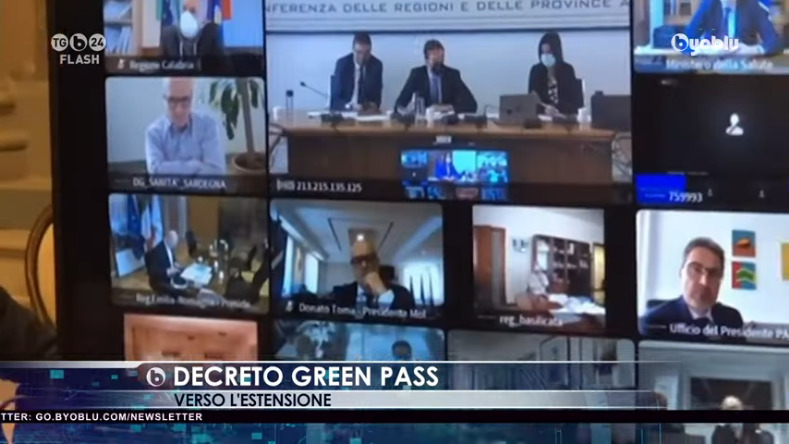 Italians woke this morning to the realization that the entire political class represented by the major parties backs the Great Reset and its tyrannical plan for the economic destruction and enslavement of Italy and its people, via the so called Green Pass.

The Italian Senate voted 189 to 32, with 2 abstentions, to confirm the recent Government Decree. Sixteen senators who protested in public against the Decree ended up voting in favor of it!

The Green Pass has no real sanitary purpose, since it can in no manner insure avoidance of infection by a virus, which has never been isolated or proven to exist. Rather by imposing the obligation of having it, more and more parts of the society fall into a system of complete control, where the mere desire to live is subjected to the obligation of either getting the DeathVaxx or paying 3x each week 10 to 15 euros for a Swab Test, which has also been shown to be highly dangerous to the health and perhaps even a  secret form of vaccination, according to some sources.

The Senate showed its godless spirit by extending the State of Emergency wanted by the government until Dec. 31, 2021, which constitutionally is the maximum length, 24 months. But alas, the Italian Constitution is already a dead letter, if it ever was anything but a post war trick to submit Italians to the control of the Masonic Banks of New York City which run the USA.

The extension is just as unconstitutional as the declaration, since in the Italian constitution there is no possibility of a State of Emergency except in time of military war on Italian soil.

The Green Pass is now “obligatory” for all who want to enter restaurants, gymnasiums, in all indoor conferences and meetings, whether political or cultural, and trains which are first class or long distance.

The Government now wants another Decree as soon as mid October which will oblige all works, State and private, to have one. This will make it impossible to work for an employer without it.

The Unions want the obligation of vaccination for all, unbelievably. The current decree imposes a sanction of between 400-1000 euros for failure to present the Green Pass, where required.

Italians opposed to the tyranny of the Great Reset are avoiding all places where it is required. And since the opposition to the GreenPass is over 90% of the public, even though about 60% have it, the result will be to run out of business all the lower and middle class, since those who refuse clients without it will not be able to survive, and those who don’t will be closed down for violation of the law.

Seeing that those who have the GreenPass have entered a system where from month to month the obligation of Vaccination may be extended from 2 doses, to 3, 4, 5, 7, the only foreseeable future for those who do so is their own death.  And that means that part of the economy which submits to the Green Pass is doomed to death just like that which refuses it.

Mario Draghi’s desire, expressed before being named Prime Minister, to have “creative destruction” in Italy and its economy has at last arrived at taking in hand its instrument of satanic creativity.