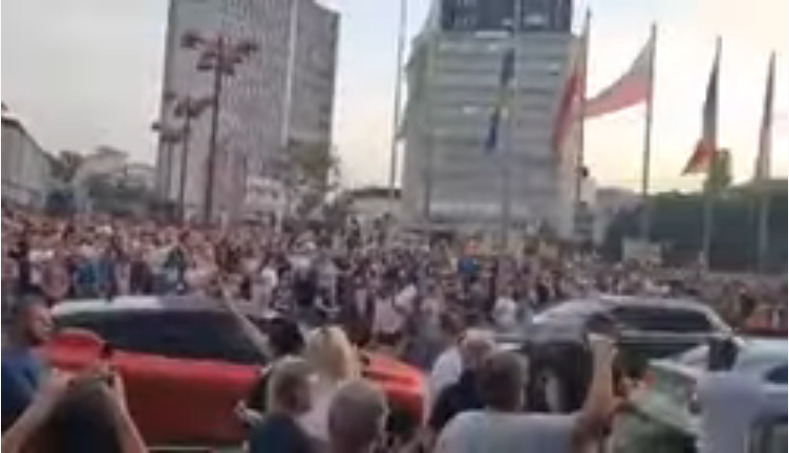 by FromRome.Info’s Correspondent in Slovenia

The Slovenian govt has mandated the latest covid nonsense last Saturday night, which was then implemented this Wednesday morning (as discussed in your article).
A huge crowd of peaceful protesters from all over Slovenia gathered in the capital of Ljubljana, in front of the Slovenian parliament, at about 6pm on Wednesday night, to object the draconian covid rules. There were about 30K people in the main square as well as all the surrounding streets (the main stream media as usual lied by saying there were about 8K people).
It was great to finally see such a great turn out of freedom-loving people (I was there). The feeling was really powerful. It was a peaceful protest. I left at about 8.30pm, when a handful of hooligans (it is suspected they were hired and paid by the govt to start a provocation) started to throw pyrotechnic material at the police in front of the parliament. The police soon responded with extremely high number of tear gas cans, water cannon, rubber bullets to disperse the public. All these were fired at the peaceful crowd, which included young kids as well.
The Slovenian govt is so far not backing down from their latest draconian rules, which are still in place as of today.
The petrol stations gave up checking the covid passes by about midday on Wednesday (after only 4 hours since the implementation of the draconian rules), as many people in several Slovenian cities blocked the petrol pumps. Some people left their cars at the pumps and walked off, as they were unable to fill the tanks. The pumps were actually locked and unless you showed the covid pass to some purposefully hired student or security minion at the station, the pumps remained locked and you could not fill up the car.
Below are the links from the Wednesday protest. The recordings are published by one of the main stream media, which described the protest as extremely violent and showed the footage mainly from 20.30pm onward.