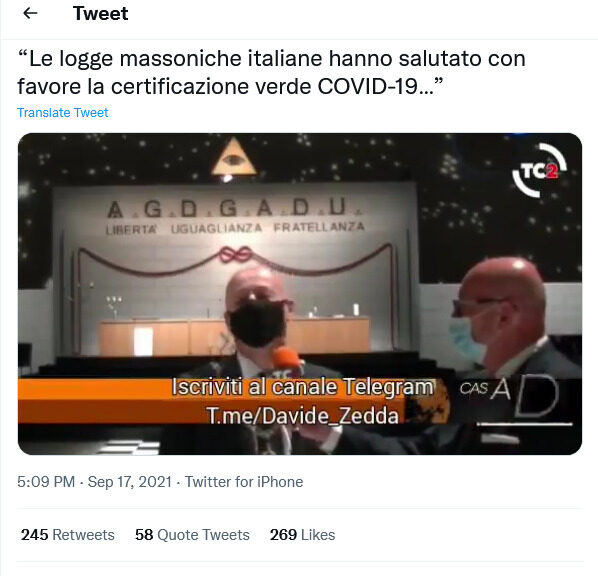 In this brief but revealing report on Italian TV channel, Casa SoleTV, reports that the Grand Master Stefano Bisi of the Grand Orient of Italia, here at Rome, has welcomed the DeathVaxx Passport obligation.

The Lodges will require the Passport, Mask and temperature measurement for all entering their lodges.

Luciano Romali, the Sovereign Gran Master of the Grand Lodge of Italia declared that the DeathVaxx is the “only way way to leave behind” the Covid threat.

Italian Freemasons have always pushed vaccines. Luigi Sacco, who in the 19th century convinced many Catholic clergy to preach vaccines, an effort which let to the vaccination of 130 thousand in northern Italia.

The Masonic doctrine of vaccination was stated explicitly in the novel by Simon Walter, who wrote, “Vaccination is the medical sacrament which corresponds to Baptism”.

If you wish to know why Bergoglio is 100% behind the Death Vaxx, as a “act of love”, then it is sufficient to know that, according to the Vatican official charged with security in Argentina, Jorge Mario Bergoglio is a freemason, as FromRome. Info has previously reported, citing the video testimony of a noted Argentine journalist on national television.

The Roman Pontiffs have every condemned Freemasonry. The Holy Inquisition was the first organization to ever investigated them, way back in the 1730’s.  To be a member of the Lodge is an act of apostasy, which merits automatic excommunication as per canon 1324, since it is a consummate treachery against the obligations of Baptism. For a brief history, see here and here.

FromRome.Info has published numerous articles on the topic of Freemasonry which can be found by using the search engine on this site, found at the top of the page, and searching for the words Freemason or Freemasonry, or Masonic or Mason.

6 thoughts on “Italy: Grand Master of the Masonic Lodge hails the DeathVaxx Passport”