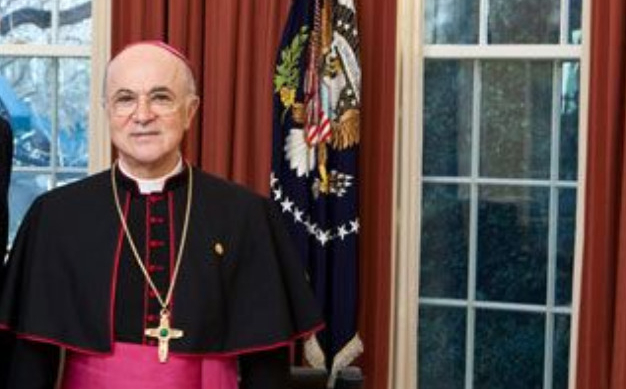 The masonic agenda of Viganò is now confirmed without a doubt, as he launches his call for Catholics to separate from the Catholic Hierarchy and form an underground Church: announcing as he does that the entire hierarchy are in league with Globalism.

This promotion of dualism is NOT Catholic. The Catholic solution, that an Archbishop incardinated in the Diocese of Rome should be promoting, is the same as the Synod of Sutri:  the call for a canonical Provincial Synod of the Roman Ecclesiastical Province (the Diocese of Rome and the Suburbican Dioceses which surround it: all of which are partakers in the Apostolic Right bestowed by St. Peter upon the Roman Church) to settle the controversy by a solemn canonical investigation and solemn judgement.

The masonic solution is the keep the opposition to the Globalist attempted takeover and silencing of the Church in a weak and ineffective position, so that the Masonic project of the Great Reset can go forward. And like they have ever done, the Lodges disable and incapacity opposition to their projects by forming controlled or false oppositions, which inherently accept the legitimacy of Masonic rule, but loudly declare themselves the exact opposite. They do this to vacuum up all opposition forces and direct them to useless goals.

Trump is a perfect example of this: he insisted you vote for him, and when he won, he failed to fight for the office and surrendered without a whimper. But he wants to run again for President so he can waste your vote a second time! No surprise then, that Viganò is an ally of Donald Trump.

The SSPX insisting on promoting the DeathVaxx and communion with Bergoglio is another perfect example of a false Hegelian dualism.

They do this in politics with the Left and Right. They have done this in the Catholic Church with the Modernists and Traditionalists.

Real Catholics would depose heretics, elect Catholic bishops and consecrate clergy for the whole world, so that no one might go without the Sacraments.

But no, Viganò wants you to follow his leadership, while he insists Bergoglio is the true Vicar of Christ, and form an underground church which attacks that Vicar, so that by doing so you merit hell for attacking whom you think is the Pope and do nothing effective to dislodge the Antipope from the Vatican, freeing the true Pope, Benedict XVI. 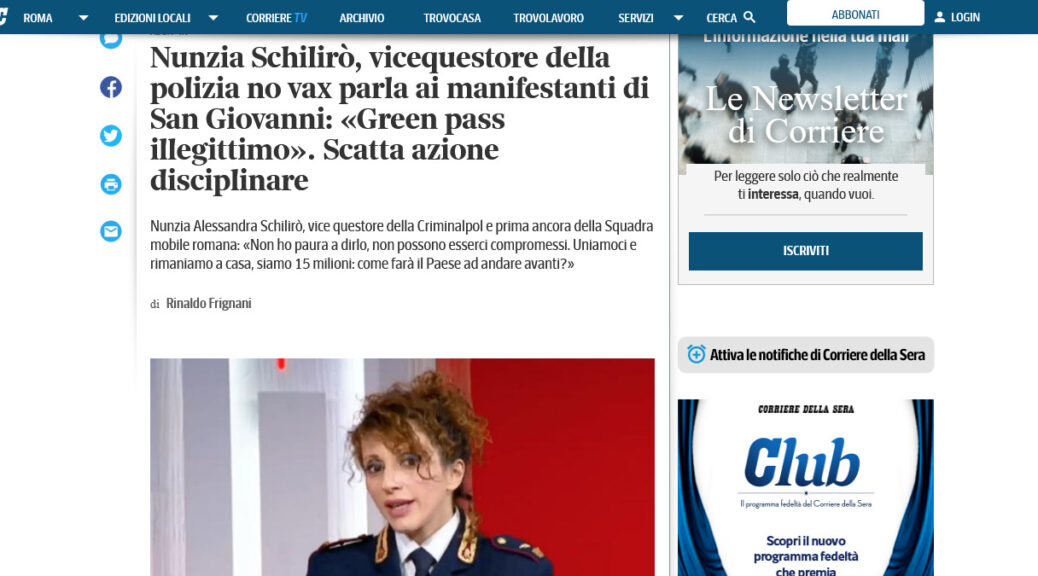 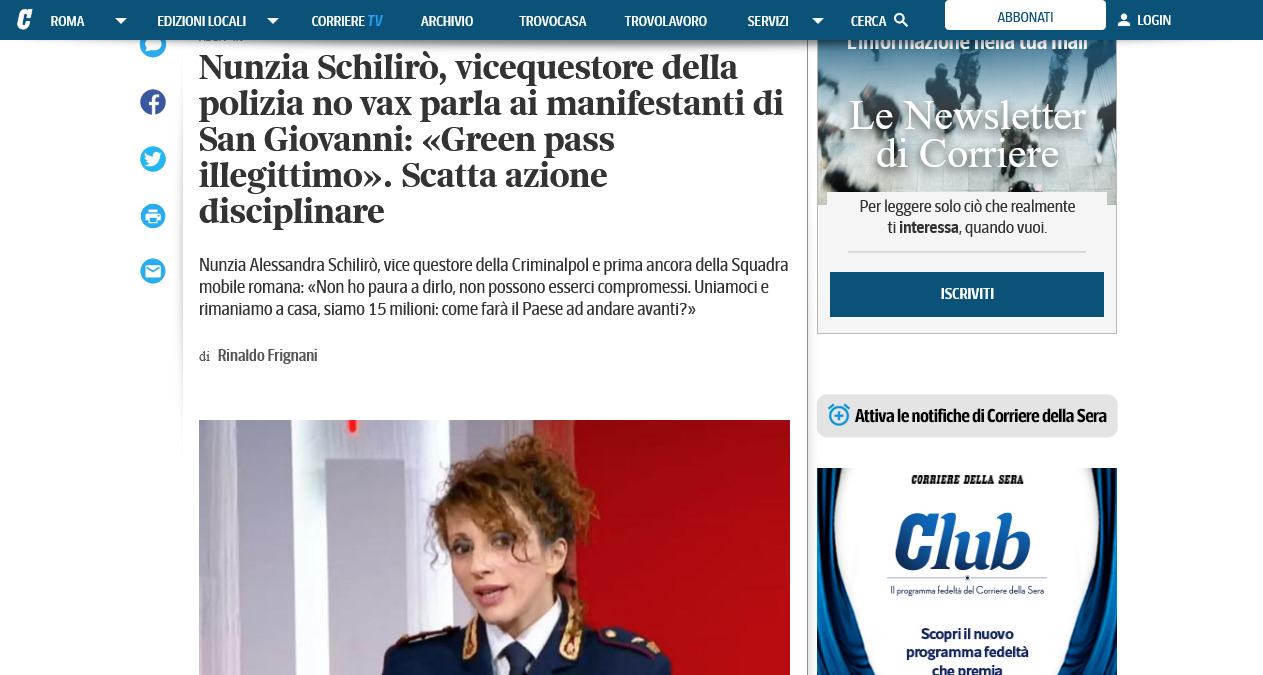 The second highest official in the Italian State Police, in the City of Rome, publicly denounced the inconstitutionality of the DeathVaxx during a public protest, in the Piazza of St. John Lateran, Saturday afternoon, Sept. 25.

Nunzia Schilirò stunned the crowd with hope as she spoke for several minutes against the law imposing the Green Pass passed recently by the ex-VP of Goldman Sachs, Mario Draghi goverment, with the connivance of Sergio Mattarella, President of the Republic, whose father was a Mafia Boss in Sicily.

The Vice-Quaestor’s role is to assist the Quaestor maintain public order in the City of Rome. The quaestorship was the ancient Roman office which oversaw at different times investigations into murders, state finances, or imperial petitioners.

Her discourse, which was not on the program — because it would never have been allowed by the Italian Dictatorship — was impromptu, but outstanding in its character for having named Jesus Christ and the Christian Faith as the inspiration for true human liberty in Italy: to the chagrin of the Masonic powers who dominate Her.

Here you can watch her full discourse, captured by a bystander in a very rough video:

As soon as news of the fact hit social media, there was an national outpouring of praise and congratulations for the as yet highest public official to speak in public against the Sanitary Dictatorship.

Globalists immediately lashed out against her saying it was a “carrier ending” decision to break professional silence.

The highest of which, Luciana Lamorghese, Minister of the Interior, who oversees the State Police, declared the opinions expressed by the Vice-Questor: “Very grave”, as you can read in the above article.

Consequently, the State Police have opened a criminal investigation against the young Vice-Quaestor in an attempt to silence her forever.

Bergoglian heads are also exploding, because when professional law enforcement officers of this height publicly decry the Green Pass as illegitimate, it clarifies for Catholics everywhere just where Bergoglio — who just imposed the obligation on all workers at the Vatican — is coming from, and it’s not Heaven or Earth.

I, for my part, as President of the Italian political party, L’Italia per gli Italiani (Italian for Italians), will be sending Nunzia Schilirò a letter of congratulations and a bouquet of roses. 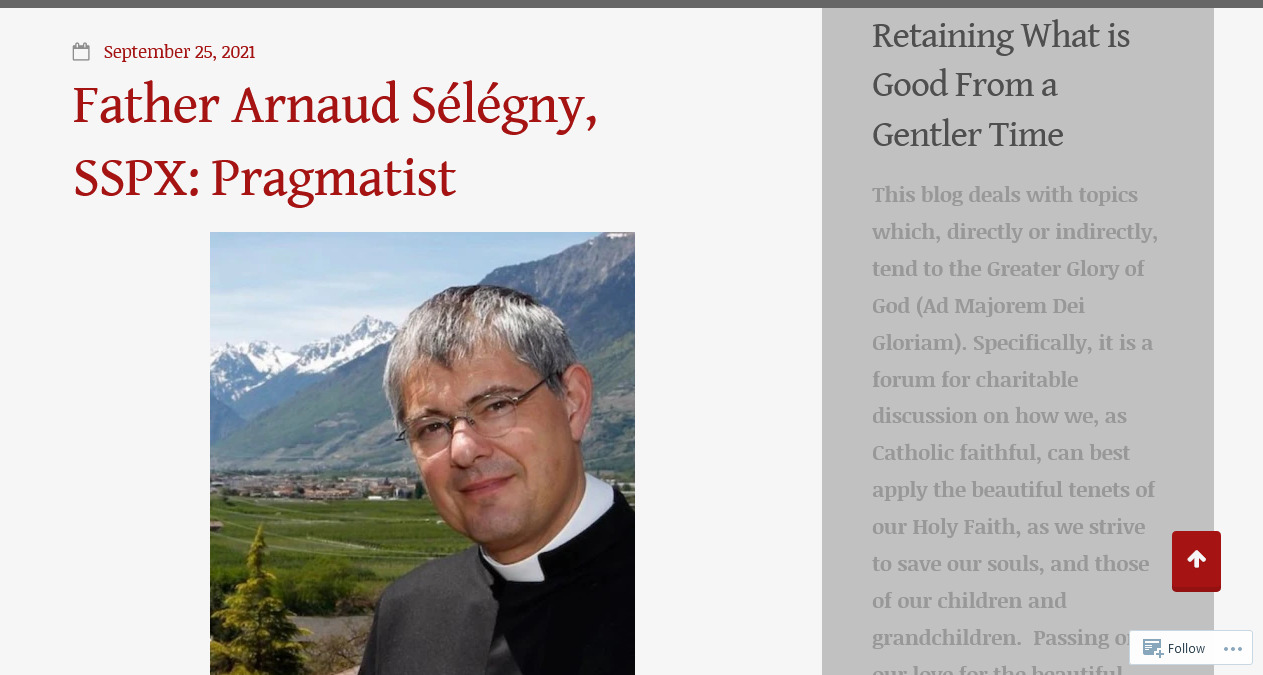