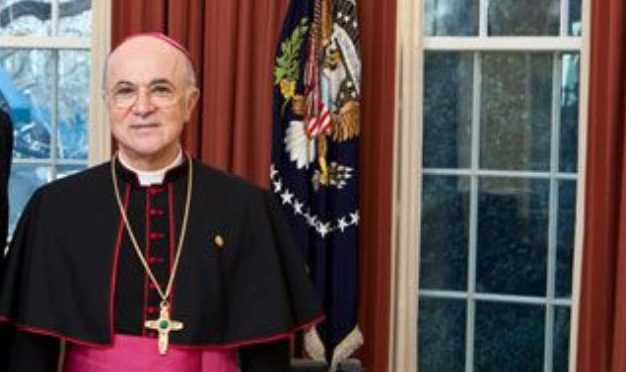 The masonic agenda of Viganò is now confirmed without a doubt, as he launches his call for Catholics to separate from the Catholic Hierarchy and form an underground Church: announcing as he does that the entire hierarchy are in league with Globalism.

This promotion of dualism is NOT Catholic. The Catholic solution, that an Archbishop incardinated in the Diocese of Rome should be promoting, is the same as the Synod of Sutri:  the call for a canonical Provincial Synod of the Roman Ecclesiastical Province (the Diocese of Rome and the Suburbican Dioceses which surround it: all of which are partakers in the Apostolic Right bestowed by St. Peter upon the Roman Church) to settle the controversy by a solemn canonical investigation and solemn judgement.

The masonic solution is the keep the opposition to the Globalist attempted takeover and silencing of the Church in a weak and ineffective position, so that the Masonic project of the Great Reset can go forward. And like they have ever done, the Lodges disable and incapacity opposition to their projects by forming controlled or false oppositions, which inherently accept the legitimacy of Masonic rule, but loudly declare themselves the exact opposite. They do this to vacuum up all opposition forces and direct them to useless goals.

Trump is a perfect example of this: he insisted you vote for him, and when he won, he failed to fight for the office and surrendered without a whimper. But he wants to run again for President so he can waste your vote a second time! No surprise then, that Viganò is an ally of Donald Trump.

The SSPX insisting on promoting the DeathVaxx and communion with Bergoglio is another perfect example of a false Hegelian dualism.

They do this in politics with the Left and Right. They have done this in the Catholic Church with the Modernists and Traditionalists.

Real Catholics would depose heretics, elect Catholic bishops and consecrate clergy for the whole world, so that no one might go without the Sacraments.

But no, Viganò wants you to follow his leadership, while he insists Bergoglio is the true Vicar of Christ, and form an underground church which attacks that Vicar, so that by doing so you merit hell for attacking whom you think is the Pope and do nothing effective to dislodge the Antipope from the Vatican, freeing the true Pope, Benedict XVI.

34 thoughts on “Viganò Calls for Hegelian Dualism in the Church, in full Masonic Tradition”