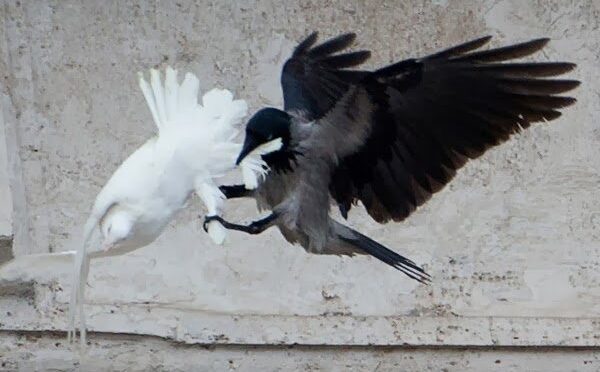 PART 27 OF THE INVESTIGATION ON POPE AND ANTI-POPE

Has the Holy Spirit become a Modernist?

Or is Bergoglio Not the Pope?

On Article 892 of the Catechism of the Catholic Church

It is quite impressive to see how and in what tones “Pope Francis” is being attacked by some Catholics, whether lay or religious.

No disrespect should be shown to His Excellency Jorge Mario Bergoglio because, although anti-pope, he is still a legitimate bishop duly ordained by the Church. (Though he is no longer a cardinal, as canonist Francesco Patruno explains, since as pope or antipope you lose the red biretta).

Moreover — as we have already pointed out — speaking ill of him, attacking him, calling him all kinds of colors while recognizing him as the legitimate pope is PURE NUTRITION FOR HIS POWER: the best favor that can be done to him as HERE Professor Antonio Sanchez of the University of Seville has already explained.

In this way, in fact, the easy message that filters to the world is: “Francis is a reformist pope, who wants to modernize the Church, gathering the true message of Christ, in its essence: peace, brotherhood, ecology. For this, inevitably, he is attacked by the gloomy and bigoted traditionalists, hypocrites and hard-hearted. Yet, not even they dare to question that he is the true pope.”

However, besides being the best assist for Bergoglio, such attacks, for Catholics, produce a serious scandal: that ism they discredit and offend the HOLY SPIRIT, the Third Person of the Trinity.

Unfortunately, it is so: paper sings. Many Catholics believe that the pope is infallible, assisted by the Holy Spirit, ONLY WHEN HE SPEAKS EX CATHEDRA, that is, only when he pronounces on important matters of faith.

In fact, the dogma of papal infallibility was established during the First Vatican Council convoked in 1868. The last and supreme ex-cathedra pronouncement was applied by Pius XII in 1950 for the Assumption of Mary. So, these pronouncements are not at all frequent; indeed, they are very rare.

Few people know, however, that Article 892 of the Catechism of the Catholic Church states that the pope is assisted by the Holy Spirit even in his ORDINARY ACTIVITY. Check it out HERE.

We quote: Art.892: “Divine assistance is also given to the successors of the Apostles, who teach in communion with the Successor of Peter, and, in a special way, to the Bishop of Rome, Pastor of the whole Church, when, though without arriving at an infallible definition and without pronouncing in a “definitive manner,” they propose, in the exercise of the ordinary Magisterium, a teaching which leads to a better understanding of Revelation in matters of faith and morals.”

His Excellency Luis Francisco Ladaria, appointed by Francis as Prefect of the Congregation for the Doctrine of the Faith, also confirms: “It is important to reiterate that infallibility concerns not only the solemn pronouncements of a Council or of the Supreme Pontiff when he speaks ex-cathedra, but also the ordinary and universal teaching of the bishops throughout the world, when they propose, in communion with each other and with the Pope, Catholic doctrine to be held definitively.”

It logically follows that by accepting Bergoglio as the legitimate “Pope Francis,” the Holy Spirit must have softened on many issues, or He was already more broad-minded and “modern” than many Catholics thought.

Considering his acts and statements, we must assume, in fact, that the Third Person of the Trinity today has become, or has always been, “personally” in favor of civil unions; that He gladly likes the pagan idol Pachamama enthroned in St. Peter; that He tolerates the blessing of one hundred German priests to gay couples by endorsing what – according to Catholicism – is the second “sin that cries out to Heaven”; that He offers affectionate support to Father James Martin, a supporter of the most extreme homosexualist straightness; that the Holy Spirit agrees that (Bergoglio’s words) “there is no Catholic God”; that “all religions are true”; that divine mercy saves all; that “the Church no longer believes in hell where people suffer”; that He doesn’t worry too much if communion to remarried divorcees is allowed in Germany, but not in Poland…

Furthermore, the Holy Spirit would confirm that “in the Holy Trinity the Persons barter behind closed doors, but outwardly give the image of unity.”

In addition, the Holy Spirit would approve without problems seven other issues raised by Bergoglio and identified as true heresies by 62 scholars. Adn Kronos summarizes them well HERE .

Orthodox Catholics, there is little you can do about it! The Pope is assisted by the Holy Spirit even in ordinary activity and you have to accept that. Those listed above are “ordinary teachings in matters of faith and customs” by “Pope Francis.”

Don’t you agree? Don’t you want to accept the hypothesis of a modernist Holy Spirit “updated to the times”?

If not, then there are two remaining solutions:

The Catechism is wrong and the pope does NOT receive assistance from the Holy Spirit even in ordinary activity. So article 892 is to be deleted.

Or, Francis is not the true pope, but an antipope, because Benedict XVI never abdicated, as we have illustrated HERE. In that case, the Holy Spirit is “JUSTIFIED ABSENT” and everything is explained.

We didn’t make the Catechism and nor invent the Logic: either the Holy Spirit has changed His views, or the Catechism is wrong, or Francis is not the pope. You choose. Quartum non datur (There is no fourth possibility).

FromRome.Info Editor’s Note — Of the three possibilities, only one is truly conservative and traditional: the one which dumps Bergoglio’s claim to the papacy and keeps the whole and spotless Catholic Faith. The other two possibilities either require that you dump part or all of the Catholic Faith and keep Bergoglio’s claim to the papacy. The Choice is yours. Don’t follow the foolish Cardinals and Bishops like Vigano who cannot even see the problem clearly, or who have chosen to dump the Faith.