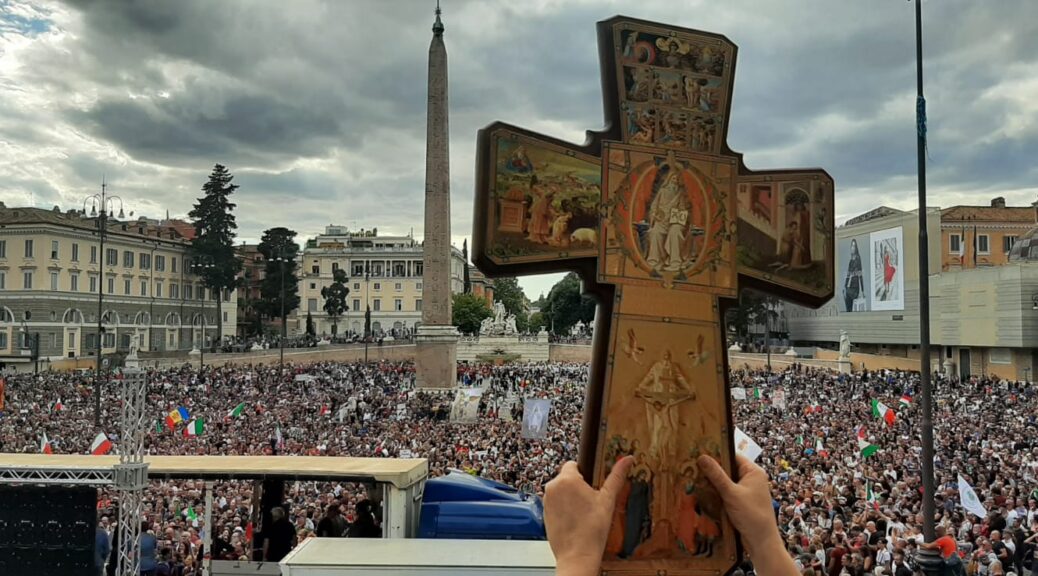 In the largest political protest since the Plandemic was launched, Italian citizens from all over the peninsula descended upon Rome to protest the introduction on October 15th of the obligation to have the DeathVaxx Passport in order to work, in the private or public sector, and effective death sentence for the poor, who must either now chose the DeathVaxx and die, or chose tri-weekly swabs at the cost of 45 euros, and thus die from want of salary, or stop working and thus starve to death.

An estimated 500,000 citizens were involved in several places throughout the city, according to Raffaele Palermo.

The crowds overflowed the Piazza Venezia after the State Police, in order to make the protest seem smaller, blocked all entrance to the Piazza del Popolo, where the protest was to be corralled.

As citizens attempted to enter the latter, the State Police were seen to use bludgeons, making blood run in the streets.

After the gathering in the Piazza del Popolo, the protesters marched upon the Piazza Chigi, the seat of the Minister of the Interior, whose malign duty will be to enforce the GreenPass requirement for work.

The Police also used bludgeons without reserve against bystanders, men and women, in order to protect the Ministry of the Interior from hearing the cries of the oppressed citizenry. Cruelty was the order of the day, and the cowardly State Police were out of uniform so that they could better infiltrate and perpetrate crimes upon the people. In Italy it is a felony to assault someone with a blunt weapon, while they are exercising their constitutional rights.

By the end of the day, the people showed their utter disdain for the State Police:

At the end of the day, the popular YouTuber, Raffaele Palermo filed this report:

It must be observed, however, that there were sufficient citizens at Rome in this one protest, to have overthrown the Government in an Orange Revolution. They just have not realized their power, and do not yet realize that this Goldman Sachs government only wants one thing from them: their death.