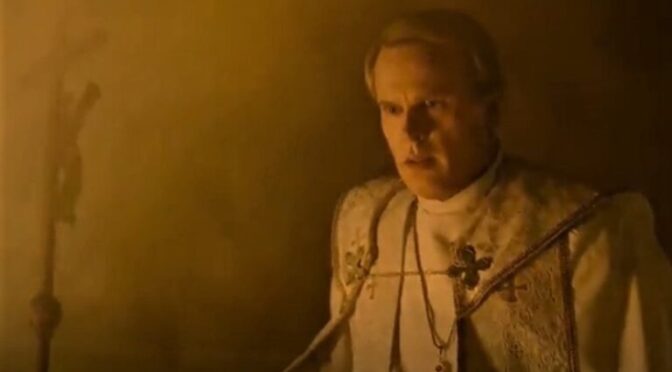 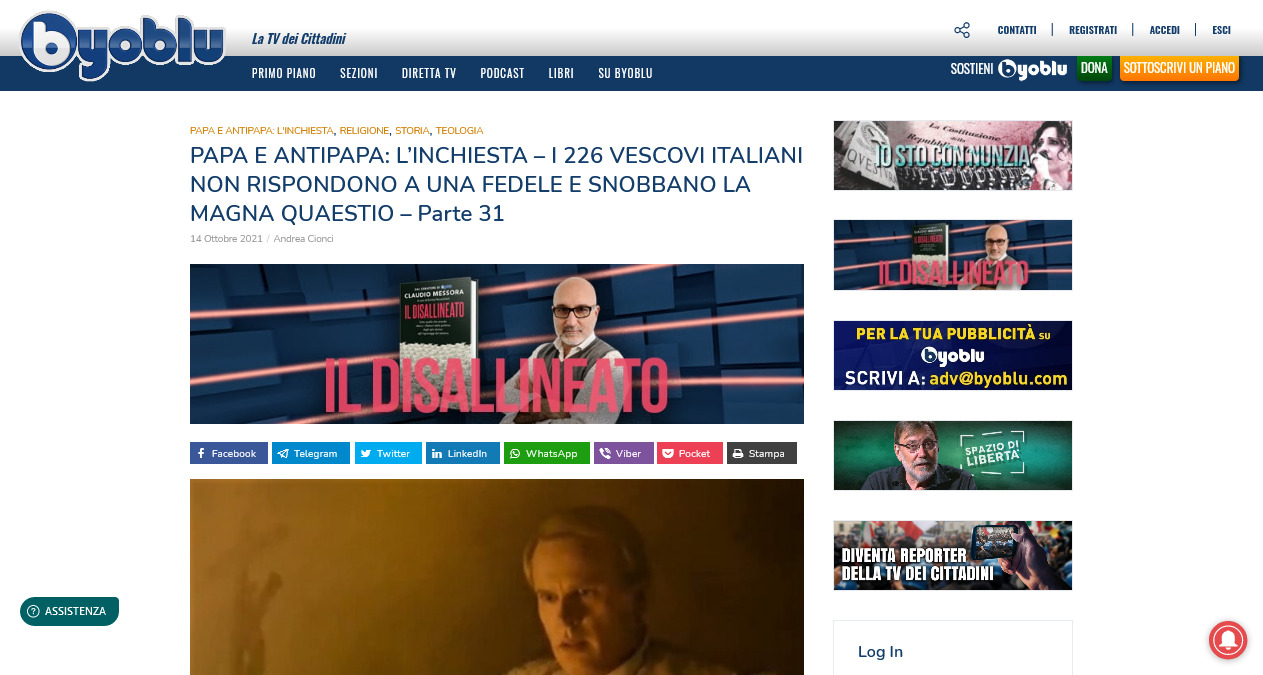 Authorized English Translation of the Italian Original, linked under the image above

Two days ago we dealt with the “passive-aggressive” strategy by the mainstream media that pretend to ignore the Magna Quaestio on the non-renunciation of Benedict XVI, thus attempting to isolate the “hotbeds of truth”. It is another convincing clue – yet another – that Pope Ratzinger’s “Plan” B, which we have dealt with up to now, is an objective reality. (Basically the whole investigation).

But even more interesting is the experience of one of our readers who, in recent months, has sent all 226 Italian dioceses, from Acerenza to Volterra, (we have the documentation) a desperate request for clarification entitled: “From the faithful a heartfelt prayer “. The email was viewed – with certificatied notifications – from 217 addresses.

Here is the text:

“We need urgent explanations from the Shepherds that Our Lord Jesus Christ has placed to guard his Flock. We ask Your Excellency to read with extreme care the extremely detailed articles below, which report indisputable facts and are highly read not only in Italy, but also abroad. Raise your voice to confirm us in the True Faith, the one unchanged for two thousand years and unchanging, the one that Christ has commanded us to follow: “If even an angel announces a different Gospel to you from the one you have been given, let him be anathema” (St. Paul, Letter to the Galatians 1,6-10) “Beware that no one deceives you; many will come in my name, saying, I am the Christ, and will mislead many. Many false prophets will arise and deceive many. ” (Matthew 24: 4-5). Unmask the wolves in sheep’s clothing: “Beware of false prophets, who come to you in sheep’s clothing, but inside are ravenous wolves” (Matthew 7:15).

The reader then attached the links of the following articles:

Now, anyone with a minimum of intellectual honesty will recognize that, regardless of whether they agree or not, our investigation is richly documented and rationally argued.

If someone presents you with a large dossier about the fact that your father, for example, may be in a very difficult condition, or in serious danger, even if you do not place the slightest trust in the interlocutor, you would not want to carefully examine the material to remove yourself. any doubt? Wouldn’t you reassure your apprehensive relatives with valid arguments?

Do not think, therefore, that the question should have been evaluated VERY CAREFULLY by the bishops, successors of the Apostles, since we are talking about the freedom of the Pope, the Pater Patrum, of the usurpation of the throne of Peter by an antipope and of salvation. of the Church for the next few centuries?

BUT ABOVE ALL: because NO BISHOP replied citing some article from the Code of Canon Law to deny what was stated – since March – on the paper version of an Italian NATIONAL DAILY after the publication of a legal text, in a theme that has been repeated dozens of other times on the same newspaper, as well as on the blogs of the most authoritative Vaticanists and on websites and newspapers around the world?

It is safe to assume that the bishops HAVE NO CANONICAL ARGUMENTS TO OPPOSE. Or that they DON’T WANT to defend the Holy Father Benedict XVI, which once again justifies Pope Ratzinger’s “Plan B” to purify the Church.

The silence of the other 199 bishops gives no way to understand how they think, but they certainly have not clarified the uncertainties of a faithful distressed. If our investigation were wrong from start to finish, they would not even have silenced the “scandal”.

If, on the other hand, these cardinals were in agreement with the results we made explicit, by keeping silent, without acting, they would take on various and serious responsibilities of a spiritual nature, according to the Catholic faith itself.

In theory, a bishop aware of this situation and – remaining “indifferent” – could be stained with failure of to help the pope, obstinate doubt, apostasy, betrayal of the Church, complicity in heresy and lies, concurrence in the destruction of Catholicism … In short, from a Catholic perspective, there would be in enough negligence or complicity to end up in Hell “in a very direct way and without going through a side-street”.

But, after all, since we are not theologians, we asked for a qualified opinion from a priest faithful to the true pope, Benedict XVI, who sends us this reflection:

“We only see the outside, the facts, and hear the words, and what we can say is that the great and true war is of spirits, it is taking place within the conscience of each of us: between the Truth and the lie; ultimately: if we prefer love to the Truth and the glory of God, or love to our own “I” (interest, laziness, avoiding problems in order not to have them, various fears). Whoever loves these things more than the Truth, says the Lord, “is not worthy of Him”. Little faith, the loss of Faith translates into infidelity, betrayal, and manifests itself in saying and not saying, in “yes but no”, in “no but yes”. Or by not saying when it is right to do it, otherwise you fail in your duty, you are guilty of omission and scandal. “His watchmen are all blind, they don’t notice anything. They are all dumb dogs, unable to bark; they doze crouched, they love to doze off. But such greedy dogs, who cannot satisfy themselves, are shepherds unable to understand. Everyone follows his way, everyone looks after his own interest, without exception” (Isaiah 56,10-11).

“Even among the leaders, many believed in him, but did not recognize him openly because of the Pharisees, in order not to be expelled from the synagogue; in fact they loved the glory of men more than the glory of God ” (John 12: 42-43)

It is makes a difference to know how to wait for the moment, to know how to talk to and to say precisely what needs to be said. It depends on the degree of authority (responsibility) that everyone has. St. Paul publicly admonished his superior, the first Pope, because a certain ambiguous and fearful behavior led to error, caused scandal. Correction must be fraternal, never anti-fraternal, but always in the Truth “which makes us free”. “Whoever is of the Truth, listens to My voice”, the Lord said to Pilate, and it is not necessary for him to make great inquiries to realize if “that shepherd” corresponds in what he says and in what he does to the only “Good Shepherd “.

Nobody deceives himself. Each of us must respond to God. May He give us the grace of love for the Truth “.