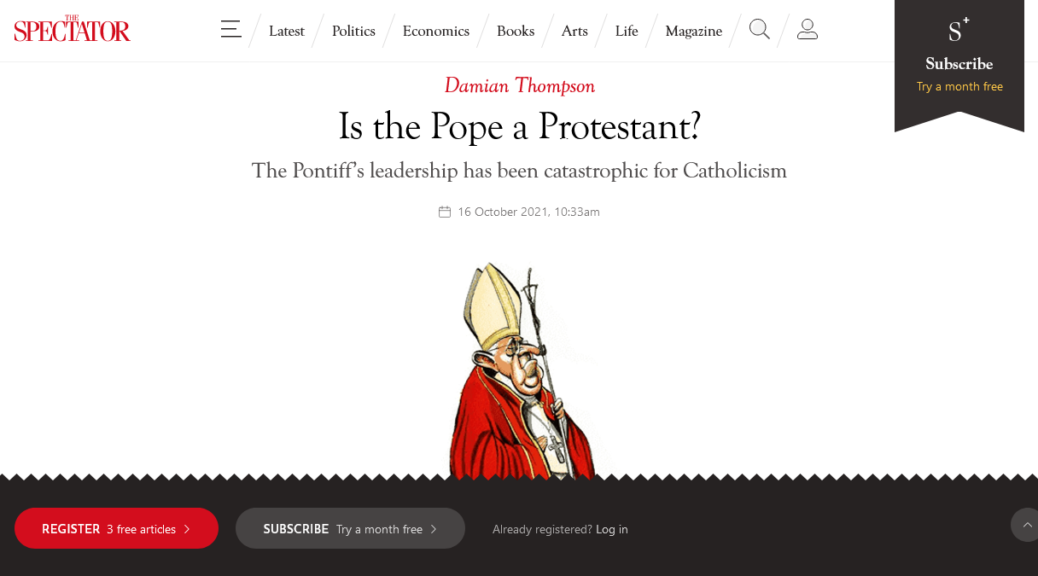 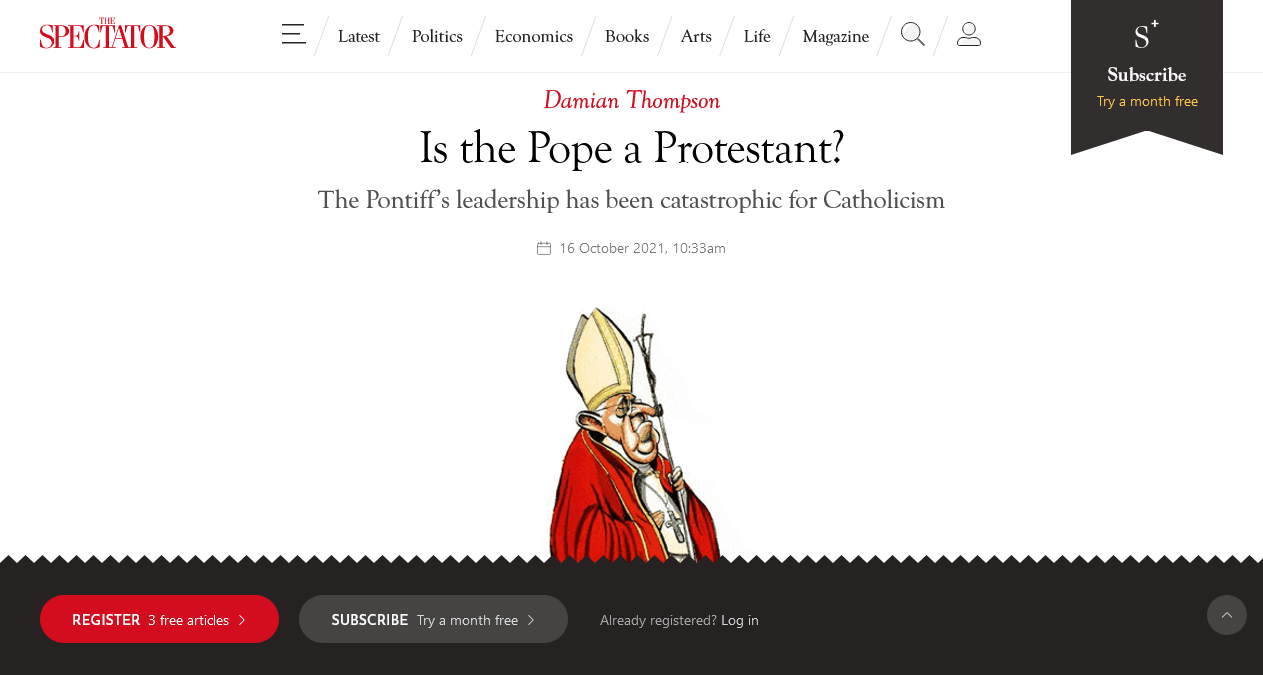 In the last few days prior to receiving from a friend an email with an article entitled “Is the Pope a Protestant?”, upon reading about Jorgè ‘Francis’ Bergoglio and his efforts to continually deconstruct the Catholic Faith and Christianity in general, I was thinking that I wish someone would write a column entitled “The Unauthentic ‘pope’ “ or the “The Unbelieving ‘pope’ ” or “The ‘pope’ Who Doesn’t Really Believe in the Catholic Faith”.
That’s telling the Truth and not beating around the bush.  The word ‘pope’ is not capitalized because many have doubts about Bergoglio’s legitimacy as ‘pope’.  There is substantial evidence that Bergoglio is not an authentic Pope… that he was elected illicitly and is the culmination of the plot to plant a Marxist/Communist/Unbeliever/Change Agent in the Chair of Peter.  Other evidence provided by some is that Benedict XVI did not resign as Pope, only the ministry (ministerium) of Bishop of Rome.
Further evidence is Francis’ efforts “to change the Church” (using the title of Ross Douthat’s book) with shocking statements, unorthodox Encyclicals, the Motu Proprio, Apostolic letters and Exhortations and his “chastising” of “rigid” Catholics and perhaps any “rigid” Christian.   (After writing this, I found an article appearing in The Remnant by Christopher Ferrara.  The article is very good and quotes Bergoglio, which article I will list in the references.)
Jorgè ‘Francis’ Bergoglio aligns himself with and promotes worldly views, e.g., 1 Creating a New Humanism, a religion without God but incorporating Christian terminology to make it appear Christian.   2. Joining with anti-life globalists in promoting the Great Reset/Build Back Better/New World Order/”Climate Change” and promoting the “vaccination” of the whole world with the dangerous and experimental COVID-19 mRNA spike protein injections (which are not “vaccines”) which are connected to abortion either by testing or use of fetal tissue cell lines.1  The goal of the globalists is total control of the world’s population by “hook or by crook” (by any means necessary).2   IMPORTANT: The aborted babies are “alive” at the time of tissue extraction. There is a connection to abortion even in some of the common vaccines.  Government grants (our tax dollars) to the University of Pittsburgh were given by the NIH (National Institute of Health) and Dr. Anthony Fauci’s NIAID (National Institute of Allergy and Infectious Diseases) to experiment on human fetal tissue “where illegally aborted babies’ scalps were grafted onto lab rats”.3 This is an abomination!
There are accusations of crimes against humanity regarding the developing and promoting of COVID-19 mRNA injections (referencing the Nuremberg Code).  Bergoglio is complicit.  He promotes the injections and vaccines in general.  Is it not logical that experiments on living tissue extracted from “living” babies aborted for that purpose are also crimes against humanity and is grossly immoral conduct?  We must also never forget the crimes against humanity by Hitler and his henchman in Nazi Germany4; and in this day and age, the people (preborn babies, babies, young children, teens, adults, the elderly, the infirm, the handicapped) are being encouraged, pressured and/or threatened with loss of employment or actually fired for refusing the experimental, dangerous and unpredictable spike protein injections containing nanoparticles, hydrogel, polyethylene glycol, Luciferase as examples. There are also those who propose the denying of necessary services and medical treatments to those refusing the injections.  The people are not being provided by government and those promoting the injections the information necessary in order to have fully informed consent.  Thousands have died and have been injured following the COVID-19 injections.
The above thoughts are my own…written before I read “Is the Pope a Protestant?”, but the title prompted me to put my thoughts in writing.  I propose that Bergoglio is not a Christian, neither Catholic nor Protestant.  I believe he parades around in the trappings of Catholicism to fool the people.  I propose he is a mix of Machiavelli, Perone, Saul Alinsky. Therefore, I believe he is an unauthentic pope, an unauthentic priest and an unauthentic Catholic.  And yes, we should pray for his conversion and the conversion of any dissenting, self-professed “Catholic”.  We also need to speak and write the Truth.
References:
1Fetal Tissue Vaccines: 12 Faulty Assumptions – Fetal Tissue Vaccines
2An Unholy Alliance: the UN, Soros, and the Francis Papacy — Yore Children
Live Tissue Harvesting – Fetal Tissue Vaccines
3NIH-funded experiments used aborted babies’ scalps: Daleiden | U.S. News (christianpost.com)
CRIMES AGAINST HUMANITY: Dr. David Martin with the Fauci/COVID Dossier (bitchute.com)

From Mengele to Fauci: The justification of humans as test subjects (commdiginews.com)

4The Nazi breeding and infanticide program you probably never knew about | by Timeline | Timeline
Nazi Medical Experiments | Holocaust Encyclopedia (ushmm.org)   Quotes:
From 1933 to 1945, Nazi Germany carried out a campaign to “cleanse” German society of individuals viewed as biological threats to the nation’s “health.” The Nazis enlisted the help of physicians and medically trained geneticists, psychiatrists, and anthropologists to develop racial health policies. These policies began with the mass sterilization View This Term in the Glossary of many people in hospitals and other institutions and ended with the near annihilation of European Jewry.
[. . .]

View This Term in the Glossaryof many people in hospitals and other institutions and ended with the near annihilation of European Jewry.[. . .]

At the German concentration camps of Sachsenhausen, Dachau, Natzweiler, Buchenwald, and Neuengamme, scientists used camp inmates to test immunization compounds and antibodies for the prevention and treatment of contagious diseases, including malaria, typhus, tuberculosis, typhoid fever, yellow fever, and infectious hepatitis. Physicians at Ravensbrück conducted experiments in bone-grafting and tested newly developed sulfa (sulfanilamide) drugs. At Natzweiler and Sachsenhausen, prisoners were exposed  to phosgene and mustard gas in order to test possible antidotes.

On social media and online magazines we are now seeing reports of patients with worsening cancer following SARS-CoV-2 vaccination.

Dr Ryan Cole, a Pathologist, in a recent presentation, stated that he is observing a 20 x uptick in endometrial cancer, and increases in other cancers post SARS-CoV-2 vaccination.

And even more concerning: a senior consultant with decades of diagnosis and treatment at a dedicated cancer hospital described to a journalist off the record that all his vaccinated cancer patients were coming out of remission; and that cancer was jumping between organs, spreading at a speed that he has never seen before (pers. Comm.).

​As Reports of Deaths After COVID Vaccines Near 16,000, CDC Urges Pregnant Women to Get the Vaccine • Children’s Health Defense (childrenshealthdefense.org)

Quote from The Remnant Newspaper – CHANGELING POPE: Bergoglio’s War on All Things Catholic by Christopher Ferrara.

Meanwhile, as always, the “rigid” opponents of Bergoglio’s process theology—which is to say, Catholics who believe the Faith has absolutely invariant content unaffected by the mere passage of time—must be denounced from the demagogue’s bully pulpit.  Accordingly, as Bergoglio reminded the Roman Curia:

Here, there is a need to be wary of the temptation torigidity [his emphasis].  A rigidity born of the fear of change, which ends up erecting fences and obstacles on the terrain of the common good, turning it into a minefield of incomprehension and hatred.  Let us always remember that behind every form of rigidity lies some kind of imbalance.  Rigidity and imbalance feed one another in a vicious circle.  And today this temptation to rigidity has become very real.

In other words, those who fear change are mentally ill.

Quote fromTheologian says Church needs both synodality and primacy | Crux Now :
Synodality as a method and a process is a structured way for the Church to listen to the voice of the living God.  (emphasis added)
A Protestant view.  Quotes from What is Process Theology?
what-is-process-theology.pdf (processandfaith.org)

10. Do you mean that process theologians don’t hold with ‘Adam and Eve’? Ah, Adam and Eve. A quick summation of the tradition might be helpful here to highlight some of the differences between process theologies and the long tradition of “original sin.” For much of Christian history, all sin and evil was traced to the disobedience of a first human pair.
[. . .]
But process cannot follow this view. All the evidence suggests that humans are part of a great evolutionary process, and that God creates in and through this process. “Creative transformation” is another name for changes that emerge in evolution. Instead of talking about a perfect first human pair existing about 6000 years ago, we talk about the long evolutionary history of our race, and the role that aggression and violence have necessarily played in our development—sometimes for our good, sometimes not.
[. . .]
​…In a process view, one must talk about communal as well as individual sin. We live interdependently, and we act interdependently. Individual sins are magnified when exercised through our communal identities, creating great evils through such things as oppressive systems of exploitation, wars of aggression, economic systems based upon greed, or systematic decimation of our environment for the sake of profit.

4 thoughts on “Not Catholic nor Christian, nor even the “Pope””