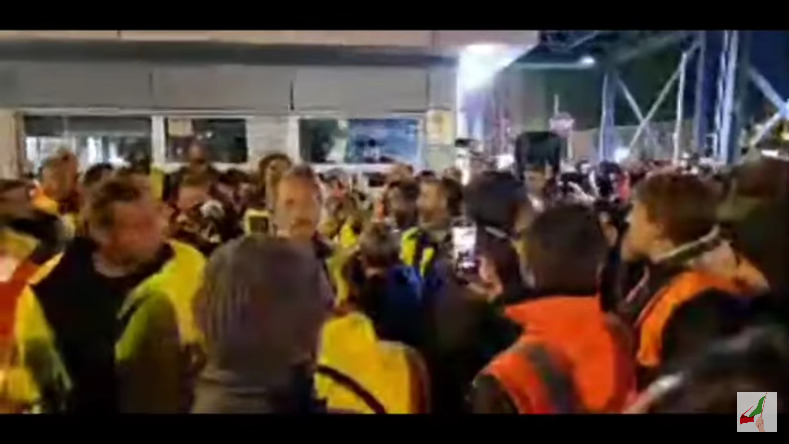 The defiant blocking of the principal Adriatic port of Trieste by the Longshoremen of that city has inspired the nation.  Italians everywhere are lauding the implacable zeal and resistance of these humble workers and citizens are flocking to Trieste from all over the peninsula to be present in supporting this history rebellion.

The government has taken notice and has invited the leaders of the strike to speak to the Senate and lower House on October 30.

But more importantly, the unions of Longshormen and HealthCare and Journalists and Firemen and other Police Unions have joined the strike.

There are currently 25,000 protesters present. And more flock to the city every day.

The demands of the Longshoremen are simple:  End to the Sanitary Controls. They have created a national Council and will organize a general worker based initiative to defend the families and children of Italy. They will go to Parliament and not make a protest at Rome, out of fear it will be diverted by the secret services, as the one on October 9th was done.

If they do not get what they want, they will block all the ports of Italy and shut down the economy. They claim they have the power now to go forward to dismantle the Sanitary Dictatorship.

Trieste is at the head of the Istrian peninsula, at the northern extremity of the Adreatic See. It was there where the Fascist movement of Mussolini got its spark after World War I, with the protests which opposed concessions of territory in the Istrian peninsula. That movement ended up eventually taking control of the Kingdom of Italy.

One thought on “ITALY: Longshormen Strike inspires Nationwide Strikes of other unions”