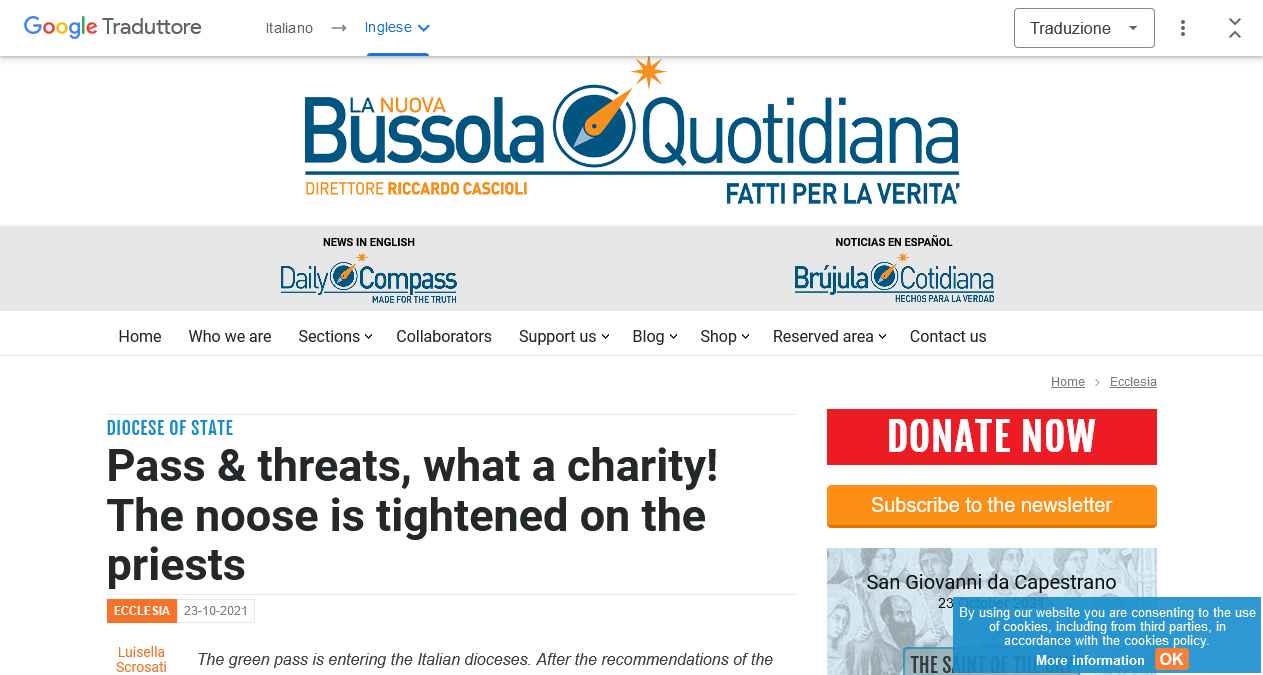 Commentary and Summary by Alexis Bugnolo

To all those Catholics who absurdly quip, “What difference does it make who is pope”, as they embrace Bergoglio as a dogmatic fact, they will now have to face in Italy the ultimate test of loyalty to their AntiPope: the obligation to be DeathVaxxed or resign from the ministry.

Read the English translation above to see how Diocese by Diocese the DeathVaxx is replacing the Catholic religion. Or, rather the Italian original, since Google had second thoughts and is now refusing to translate the article.

So I will summarize.

In Tuscany, where there is the highest concentration of Marxists and unbelieving Jews, the Archbishop of Florence has demanded all be DeathVaxxed, have antibodies, or get DeathSwabbed every 72 hours: this includes all clergy, seminarians, cathechists, employees.  This is the best way to guarantee the extermination of the entire Diocese! You are free to proclaim heresy, but you must NOT even dare try to evade the Sanitary Dogmas!

At Arezzo, even children who want to attend Catechism classes must have the DeathVaxx Passport, otherwise, they cannot learn about Jesus Christ!  This really shows where the priorities are!

The Bishop of Arezzo, in an interview, made it even more clear. The 10 no-Vaxx priests who are holding out will be suspended a divinis if they continue to refuse the New Religion. No mention where they will go if they accept the new religion! The other 309 priests have already sealed their eternal doom, however, which makes the Bishop feel so proud and happy!

At Foligno, in Umbria, proclaiming the Bishop to be friendly and kind, the Vicar has written all the clergy saying that if they do not comply similarly they must abstain from all sacred ministry! The Dioceses of Assisi and Nocera and Norcia will follow suit. Terni will follow the Diocese of Milan’s DeathVaxx Dogmatic mix.

I will add that these dioceses never were so strict about AIDS which is a really lethal disease, but perhaps, just perhaps, they are blind to that kind of life-style choice which their friends are all into.

What this article does not recall, is that this summer the Dioceses of Sicily were so eager to kill off all the faithful, that they opened more than 100 DeathVaxx centers on parish property, just to make sure they got ever last sheep of Christ!

40 Million Italians who accept Bergoglio as the Pope have already been DeathVaxxed according to the continually lying Goldman-Sachs Dictator, Mario Draghi government. That is, Nearly all the Catholics of Italy and all the clergy beholded to Bergoglio have or are in the process of being DeathVaxxed.

Experts say that none of them will live more than 3-10 years.

But none of the Catholics in communion with Pope Benedict XVI have been deathvaxxed.

So, It does make a difference, which pope you recognize, after all.

The quip of the petulant traddie, above, reminds me of a scene out of Pilgrims Progress, rewitten to suit our times:  “What does it matter which god you worship, the Unnamable One or Lucifer? “, says one demon to another angel who is thinking of joining the rebellion.

And we know how that worked out….

I for one have to start making preparations to receive a lot of refugee religious and priests from the Dioceses.  That is the purpose of the Commandery of Bl. Urban II, here in the province of Rome, where I reside.

Many say, “But you Catholics who think Benedict is the Pope are such a small minority, what does it matter?” — I say, give it a few years, and we will be the only Catholics left standing.  And what does that say about the Divine Providence, blessing one and cursing the other?  I would say that clearly we are the blessed and Bergoglians are the cursed. In which camp do you feel comfortable?