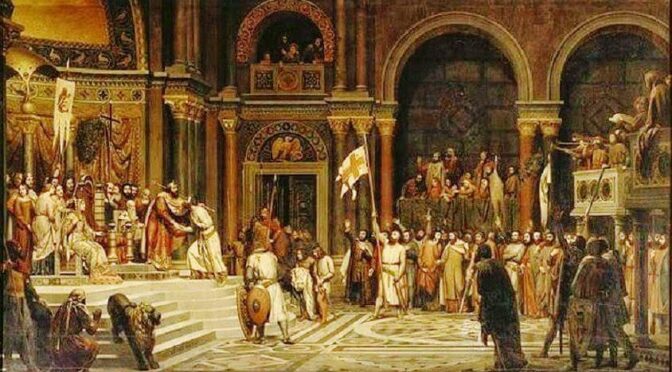 An Appeal by Andrew J. Baalman

On October 30th 2021, on the Facebook Page Of The Holy Resurrection Monastery of the Byzantine Greek Catholic Rite, Abbot Nicholas’ homily:

“Said regarding the Gospel Passage where in St. Luke that Our Lord is notified his mother and brothers are outside, but Jesus says, “my mother and brothers are those who hear the word of God and Obey.”  then the homily was on confidentiality & the secret of the confessional; then went into Biden’s meeting and with Bergoglio; which he calls Pope; by the Vatican’s no comment response; says it was the right thing, then about how Boris Johnson so called came back to the Faith & how the news papers asked him, “it is none of your damn business if I am Catholic or not”

He actually said the “d” word in between the Sanctuary and where the gate closes in the Byzantine Rite.  And he pushes the crazy covid restrictions which their Patriarch promotes.

This goes against the Great Doctor Of The Church and Archbishop Of Constantinople; Saint John Chrysostom in his second Homily On The Letter To The Hebrews 1.3

“EVERYWHERE indeed a reverential mind is requisite, but especially when we say or hear anything of God: Since neither can tongue speak nor thought hear anything suitable to our God. And why speak of tongue or thought? For not even the understanding which far excels these, will be able to comprehend anything accurately, when we desire to utter aught concerning God.”

Now, for Abbot Nicholas to say what he said at the steps where the Royal Doors open, where it separates the sanctuary from the Holy of Holies, goes against Saint John Chrysostom and his teaching in this homily.

“Without doubt you remember the parable where the Lord calls Himself a vine and His Father the husbandman, and every one of us who are grafted by faith into the Church the branches. He invites us to produce fruits in abundance, for fear lest our sterility should condemn us to the fire. cf.John 15:1-6 He constantly compares our souls to vines. My well beloved, says He, has a vineyard in a very fruitful hill, Isaiah 5:1 and elsewhere, I have planted a vineyard and hedged it round about. Matthew 21:33 Evidently He calls human souls His vine, those souls whom He has surrounded with the authority of His precepts and a guard of angels. The angel of the Lord encamps round about them that fear him. And further: He has planted for us, so to say, props, in establishing in His Church apostles, prophets, teachers; and raising our thoughts by the example of the blessed in olden times, He has not allowed them to drag on the earth and be crushed under foot. He wishes that the claspings of love, like the tendrils of the vine, should attach us to our neighbours and make us rest on them, so that, in our continual aspirations towards heaven, we may imitate these vines, which raise themselves to the tops of the tallest trees. He also asks us to allow ourselves to be dug about; and that is what the soul does when it disembarrasses itself from the cares of the world, which are a weight on our hearts. He, then, who is freed from carnal affections and from the love of riches, and, far from being dazzled by them, disdains and despises this miserable vain glory, is, so to say, dug about and at length breathes, free from the useless weight of earthly thoughts. Nor must we, in the spirit of the parable, put forth too much wood, that is to say, live with ostentation, and gain the applause of the world; we must bring forth fruits, keeping the proof of our works for the husbandman. Be like a green olive tree in the house of God, never destitute of hope, but decked through faith with the bloom of salvation. Thus you will resemble the eternal verdure of this plant and will rival it in fruitfulness, if each day sees you giving abundantly in alms.”

Then his agreement with the evil Bergoglio and Biden, about confidentiality of the meeting regarding the approval or denial of whether Biden can or should receive the Blessed Sacrament, is reprehensible. Because Biden should be denied the Blessed Sacrament and the Bishops of the entire Church should do the scene from Becket and publicly Excommunicate Biden and all evil doers.

All Priests, Archpriests, deacons, Archdeacons, Abbots, Bishops, Patriarchs should be in agreement that the evil going on and the evil being preached by Bergoglio should be denounced and also call him the Antipope.

When Pope Benedict XVI did his Sacred Liturgies; both the East and West were present.  The Holy Gospel was read both in Latin and Greek by the Archdeacon.  The relations were great and it seemed like the Orthodox were nearing their return. Then the CIA and their inside group, Saint Galen Mafia wanted Benedict out, so that their own man could stop the restorations that Benedict was doing.

The head Cardinal of the Saint Galen Mafia, the late Cardinal Danneels bragged openly about them getting CIA Asset; Jorge Bergoglio from Argentina and friends of the Junta in the Dirty War; elected as Antipope.

Which makes the so-called Conclave that elected Jorge Bergoglio Null and Void; all his Cardinals, Encyclicals, Everything he has done, Null and Void.

Not To Mention, the Investigation Into The So Called Renunciation of Benedict XVI and the Study Of The Latin Document That Benedict wrote and read from, which proves he didn’t Resign.

You can read and watch all of the Investigation Into This Important Subject here: An Index To Pope Benedict’s Renunciation

So much has been written toward the Latin Rite Catholics, but after witnessing what I did, I knew we needed to reach out to our Eastern Lung of the Church.  To share this truth of what is being known regarding Pope Benedict and that he is still our Holy Father.

Then, to have that abbot do that type of Homily at the foot of the Royal Door, which symbolizes the Holies Of Holies In Heaven, what a shock.

I love the Byzantine Rite because it shows true beauty of the Faith and what we can expect in Heaven.  But to curse at the Royal Doors, where the Holy Of Holies stands, shows how much a priest has lost or never had the Faith and that he has no love for the sense of anything Divine or Holy.

It is time to restore the Divine and Holy, and by restoring the knowledge that Benedict XVI is still the Pope, that those who follow the Antipope, need to be removed and have no place in the Church.

But don’t expect the followers of the Antipope to go away silently; they will still do their evil vicious attacks; but once they are exposed, hopefully the Priests and Bishops will be vocal and restore the Sacraments faithfully under the real Holy Father, so we can all take part in the Sacraments again faithfully.