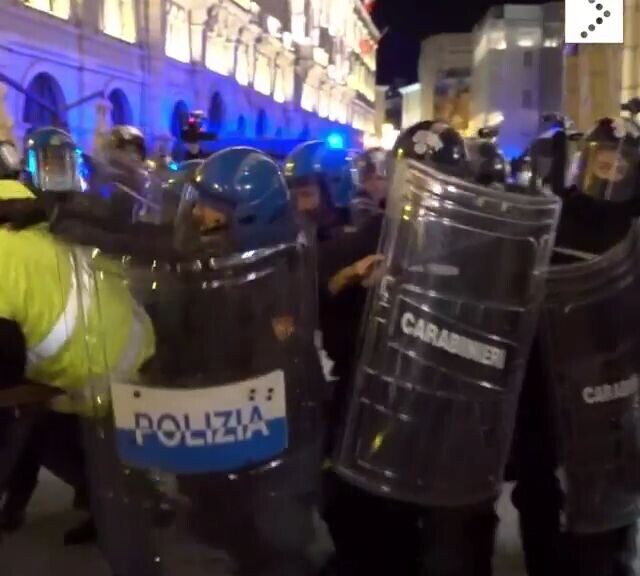 The Mayor of Trieste, at request of the Goldman Sachs Dictatorship, has banned all political manifestations in the principal piazzas of the City until Dec. 31 “to prevent the spread of Covid-19”, by which he means the spread of rebellion against the Globalist Tyranny.

But the citizens of Trieste would have none of it and came out and filled the Piazzas all the same, in thousands. Reports claim at least 8,000.

Rigid controls were imposed by the Police to prevent those from other cities from entering the city. But they still came and entered the piazzas. That is when the police turned vicious.

The Carabinieri responded by forming anti-riot squads and brutally beating the citizenry as they attempted to clear the piazzas. You can see the police struggling to maintain order, because, once the citizenry decides to take it no more, they could be easily overrun and beaten down.

With outrages against the peaceful and constitutional expression of opposition to the Sanitary Dictates like this, that day will soon arrive.

Trieste has become ground-zero for the Rebellion against the Global Reset in Italy. On Oct. 15th there began a series of blockades and strikes among the longshoremen, which rapidly spread to the city. The staunch defiance of these humble workers drew the admiration and respect of the nation and the ire of Mario Draghi and his un-elected government. Draghi responded by sending a Minister to speak with them, which encouraged them. But this was a trick to psychologically profile them and study how to destroy them. Subsequently, the longshoremen were asked “to avoid violence” and protest outside of the customs zone of the port, whereupon the Government ordered water canons with chemical irritants to spray the protesters, who were staging a sit-in, in their faces! Then the government promised to speak with them at Rome, but when they came and spoke at the Parliament, no response was given.

The Longshoremen have always asked for one thing: the complete abolition of the DeathVaxx Passport. And when Stefano Puzzer, the principal spokesmen for them, got no response, he went to the Piazza del Popolo and set up a table and said he would wait for it.  Then thousands of citizens at Rome began to flock to him, and fearing the spark which could ignite an orange revolution, the government immediate detained him and 5 hours later expelled him from Rome with a police order never to return for the next 12 months, ordering him to return home at Trieste before 9 pm of the next day!  Then the Mayor of Trieste and the local Chief of Police ordered the piazzas closes. The latter declaring, “it is time to suppress the right of assembly”!

Here is a complete report in Italian.

And here are some raw footage reports: