Pope Francis at Mass for the World Day of the Poor:”We need to overcome our self-absorption, our interior rigidity, which is a temptation of today’s restorationists, who want an ordered, all rigid, Church. This is not the Holy Spirit. We need to overcome this.” pic.twitter.com/PoUy62IbwM

This homily appears to be Bergoglio’s reaction after the publication of a book entitled, “From Benedict’s Peace to Francis’ War” by Angelico Press, which published extracts of writings by Cardinals Sarah and Brandmuller, without their authorizations. The Cardinals have repudiated the book entirely and thus have publicly disavowed the restoration of the Ancient Liturgy as a pastoral solution to today’s problems. If their reactions surprise anyone, it is only those Catholics who have been misled for years by the controlled-opposition media.

The publisher of the book, Angelico Press, had been criticized this spring for several publications by which it seems to be attempting to introduce the esoteric and occult into Catholic Worship, especially into the “Traditional Catholic Movement”. Certain citations from their publications and authors published make one think that the publishers are in agreement with this as a means to enrich modern Catholic spirituality.  If these accusations are true, then it appears that the publisher has cleverly maneuvered Sarah and Brandmuller out of the conservative movement by inciting a reaction on the basis of a violation of intellectual property rights, and by associating them with Archbishop Viganò.

I am firmly convinced that Viganò is conducting a Masonic campaign, called Johnny come Lately, at the request of the American Lodges. Until a Catholic recognizes the words of Christ and canon Law, and thus that Benedict XVI remains the Pope, he must be recognized as manipulated or willfully rebellious.

Bergoglio’s statement is also completely Masonic, once you realize that it was the American Lodges through the Dept of War, who in 1953 declared doctrinal warfare against the Catholic Church and who flooded Rome with agents during and preceding Vatican II to achieve this purpose. They intervened at the Conclaves of John XXIII, Paul VI, John Paul II and Bergoglio.  They never wanted John Paul I, who died just 33 days after being elected, nor Benedict XVI who was pushing out the pedophiles in the clergy. Bergoglio, promoted by the Mafia of St. Gallen, with pressure from the CIA asset, Deutsche Bank, has been preaching the doctrine of Barack Obama for 8 years at the Vatican. This is the perfect result of what Hilary Clinton, when Secretary of State wanted, when she called for a “new springtime” in the Catholic Church. You would have to be blind not to see that Bergoglio is the perfect creature of that political agenda.

For the full story on the book by Angelico Press, see here below, in the article from Il Messaggero — the newspaper which appears to have forged an agreement with the Vatican for special privileges after agreeing to censor any news to the invalidity of Bergoglio’s election — entitled, “Pope Francis — The anti-Bergoglian front implodes after Sarah and another Cardinal distance themselves from a new critical book”.  The article contains personal and private details of emotional reactions and behavior of Cardinals Sarah and Brandmuller which it could not have had without their consent. These Cardinals never speak with the Press. The German Cardinal lives in the Vatican, and the African in an apartment nearby the Walls of the papal city. 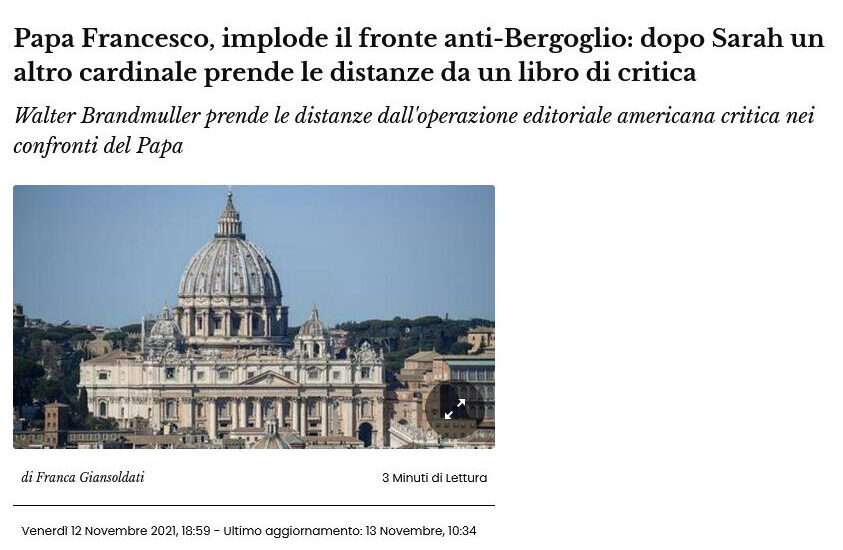 5 thoughts on “Bergoglio goes over completely to the dark side…”