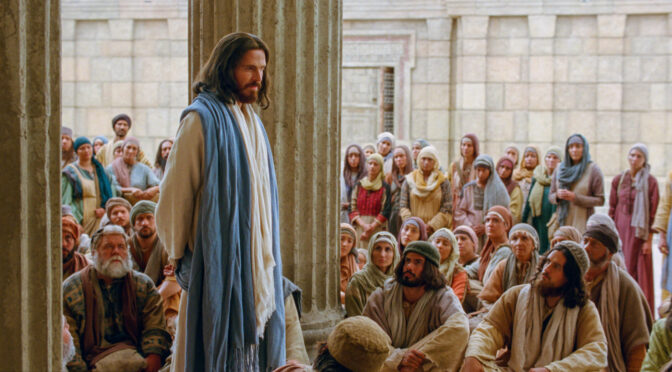 Now that the world is in the death spirals of a global conspiracy to psychologically debilitate, disorientate and control all of humanity and subject them by a state sponsored campaign of misinformation, terrorism and dictatorial threats and decrees, it behooves us Christians to seek counsel in the teachings of Our Lord Jesus Christ, for a great battle is upon us, and we will not survive this without Him.

Our Lord warned us of these things the week before He was arrested by the High Priests of the Temple and taken before Pilate, falsely accused, condemned unjustly, whipped to blood, crowned with thorns, and crucified by Roman soldiers upon the hill of Golgotha, outside the holy city of Jerusalem, with His face turned towards Rome.

These are His words, which He uttered in the Temple, at the beginning of April, in 33 A. D. (cited from the English translation known as the Douay-Rheims Bible):

And take heed to yourselves, lest perhaps your hearts be overcharged with surfeiting and drunkenness, and the cares of this life, and that day come upon you suddenly. 35 For as a snare shall it come upon all that sit upon the face of the whole earth. 36 Watch ye, therefore, praying at all times, that you may be accounted worthy to escape all these things that are to come, and to stand before the Son of man.

What most commentators until our present times have failed to notice is that these words of Our Lord cannot be applied to the His sudden Return at the end of time, because Our Lord’s Return cannot be called a trap.

Clearly then He is referring to a great deception.

The Apostles confirm and explain this Teaching of Our Lord

And Saint Paul, whom He converted on the road to Damascus and sent as a teacher of righteousness among the nations, explained this prophecy of Our Lord, which was recorded by St. Luke, the disciple and secretary of St. Paul himself. Take note of the passage I have bold faced here in the Apostle’s Letter to the Thessalonians:

For the mystery of lawlessness already works; only [there is] he who restrains now until he be gone, 8 and then the lawless one shall be revealed, whom the Lord Jesus shall consume with the breath of his mouth, and shall annul by the appearing of his coming; 9 whose coming is according to the working of Satan in all power and signs and wonders of falsehood, 10 and in all deceit of unrighteousness to them that perish, because they have not received the love of the truth that they might be saved. 11 And for this reason God sends to them a working of error, that they should believe what is false, 12 that all might be judged who have not believed the truth, but have found pleasure in unrighteousness.

Now this is exactly what we are seeing in the Scamdemic. 60-90% of humanity has accepted the lie that there is a Pandemic and that the DeathVaxx is good and necessary, and though we might try to reason with them with facts and evidence, they are impervious to the truth, because they love lying and love lies and have already in their hearts chosen to live according to lies and in lies.

As for Scripture, St. Paul speaks from an Angelic point of view, by attributing to God the sending of the “working of error”. This does not mean that God causes it, but that God permits it as a punishment.

Finally, St. Paul’s term, “a working of error”  or “working of delusion” (ἐνέργειαν πλάνης) is a good description of what we mean by the Scamdemic: a long-belabored plot of lying to deceive the whole world.

So what is this trap and snare of which Our Lord warns us?

He says that those who are given up to the lusts of this world would be at risk, and therefore He urges us to live humble, penitential, mortified and sober lives of faith and prayer to not be entrapped.  Therefore, this snare must include some offer which binds the person who accepts it and brings them to destruction.

St. John the Apostle speaks of this deception and snare in his Book of the Apocalypse. For in Chapter 13:16-18, he makes it clear that there will be a threat upon all of humanity to take a mark, which contains a number, and without it you will not be able to participate in society:

And it causes all, the small and the great, and the rich and the poor, and the free and the bondmen, that they should give them a mark upon their right hand or upon their forehead; 17 and that no one should be able to buy or sell save he that had the mark, the name of the beast, or the number of its name. 18 Here is wisdom. He that has understanding let him count the number of the beast: for it is a man’s number; and its number [is] six hundred [and] sixty-six.

And the beloved Apostle clearly indicates that this mark will cause a continual slavery and suffering, and mark which those who are faithful to Jesus refuse because it is contrary to His teaching:

And the smoke of their torment goes up to ages of ages, and they have no respite day and night who do homage to the beast and to its image, and if any one receive the mark of its name. 12 Here is the endurance of the saints, who keep the commandments of God and the faith of Jesus.

The Apostle John also tells us the effect of receiving this Mark or character (the Greek work for Mark):

And I heard a great voice out of the temple, saying to the seven angels: Go, and pour out the seven vials of the wrath of God upon the earth. 2 And the first went, and poured out his vial upon the earth, and there fell a sore and grievous wound upon men, who had the character of the beast; and upon them that adored the image thereof.

And this is a common effect of the DeathVaxx, a skin rash covering part or all of their body, or tumors which sprout in all parts thereof. But many are also suffering in their bodies in their neurological systems or suffer a biting pain in the chest from myocardial inflammation or heart attacks.

What more do we need to know? Our Lord warned us. We must chose between Him and the DeathVaxx.

15 thoughts on “Our Lord Jesus Christ prophesied the Satanic Scamdemic”