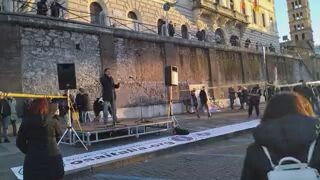 discorsi lunghi
English language Summary
At the demonstration on Tuesday 14 December in Piazza Bocca della Verità at Rome, organized by the new workers-rights organization for the Armed forces, OSA, against the obligation of the green pass for the forces of order issued on 6 December and entered into force in Italy on 15 December; a gentleman led the crowd to approach, saying: “Come closer !!!”
“Does the government want us to be divided and distant ?! I tell you:” come closer “.”
The man speaking is Cisco Orlando, whom 8 years ago the mafia tried to shoot. He is the president of the “Angels for the salvation of children” Committee and was was elected honorary member of the “international parliament of legality” because he fights against the mafia.
At the beginning of the pandemic, he immediately understood “that something was wrong”, that they were lying to us to make big deceptions, so he promised that he would fight to give his children a better world.
Traveling, he met many competent citizens, like lawyers, doctors, activists, but he realized the weakness of the Italy is that journalists are not willing to speak out.
He evoked strong emotions, addressing the crowd, saying: “The only fear I have: is to look my 3 children in the face and tell them: ‘I was a coward, I didn’t know how to defend you.'”
_________
CREDITS: Video and summary by Eugenio Dangelo.

One thought on “Cisco Orlando speaks to the Armed Forces, Dec. 14, Roma”