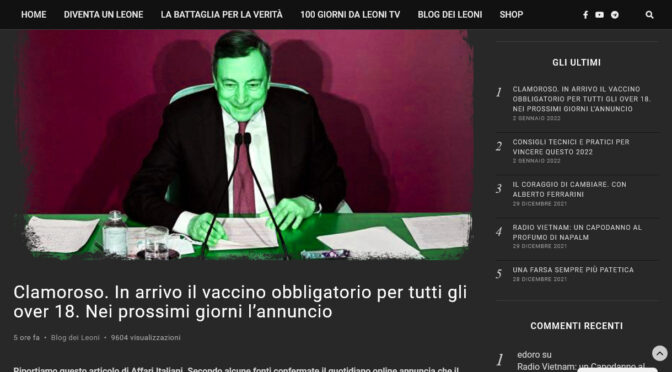 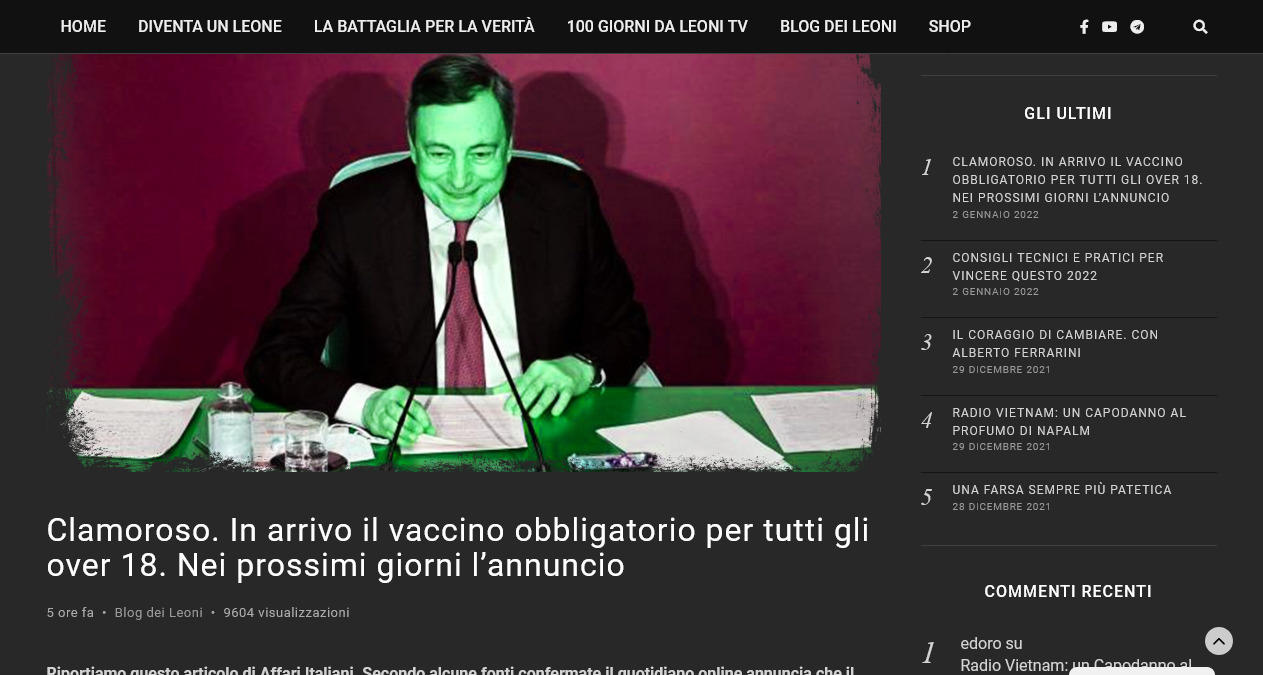 The horrific and tragic news out of Italy this night, is the report by Affari Italiani, a reliable news source, that the Mario Draghi government will establish a universal obligation to be DeathVaxxed for all residents in Italy who are 18 years or older.

Click the image above to read the report, in Italian, by 100 Giorni da Leoni

FromRome.Info reported on this intention back in May, but was mocked as a spreader of false information and conspiracy theories.

But AfffariItaliani.It report appears to confirm our report of May, citing several sources with inside information in the highest levels of the Italian Dictatorship.

Here is a link to their report:

According to this report, the decision will be taken on January 5th.  Those not vaxxed will only be allowed to go to the pharmacy (to buy from BigPharma), the supermarket etc.. They may even be forbidden to visit friends and family. Fines might be as high as in Austria. The right to work will be eliminated for all but who have a Super Green Pass certified that they have been DeathVaxxed to the maxx, according to the current schedule for unlimited doses.

Noteworthy is that the new decree may grant compensation for those injured by the DeathSerums. I guess, that they figure that if they promise to take care of you, if you risk suicide and permanent biological damage by 40 different lethal factors, then it’s O. K.. What devils!

Mario Draghi, the Prime Minister, is a ex-VP of Goldman Sachs, an investment house in New York City which is controled by the Skull and Bones Lodge.  Skull and Bones is the most powerful Satanic club of pedophiles in the United States and they are infamous for having recruited, funded and backed Adolf Hitler, to look the gold of banks in Europe and massacre some 40 million Christians so as to create a political an economic power vacuum after World War II.

The attack upon Italy, launched by the Globalist government of Giuseppe Conte — former professor at Yale, the home ground of Skull and Bones — is being consumated by Mario Draghi, who even before being thrust into power — he was never elected — called for “creative destruction” of the Italian economy as a way of solving its debt crisis. (By this he evidently means genociding all the pensioners).

In Italian law the government of Mario Draghi is already a criminal enterprise which has consummated a coup d’etat with the extension of the unconstitutional State of Emergency beyond the 2 year Constitutional limit.

The penalty for not being DeathVaxx appear so be exclusion from all work and employment and administrative fines. — In Italy, administrative fines can be contested in court, and nearly all previous and current fines are being overturned in the tribunals.  So the determination of whether this new obligation will have any teeth, so to speak, will be in the details of under what conditions the sanctions for those refusing to be Jabbed will be imposed.

The imposition of an obligation for DeathJabbing in Italy will undoubtedly cause hundreds of thousands to flee Italy while forcing the remaining opposition to go underground or begin open armed revolution.

This latter possibility seems remote, because the largest protest scheduled for Rome this month, on January 15th, calls for a massive sit in as a way of removing Dictatorship.  One does not know whether to laugh or cry.

Draghi’s recent Sanitary Diktats, however, have grown much more strident since it became generally known that Bergoglio is dying. I suspect that the major purpose, therefore, he has in issuing these now is to prevent the election of a non Vaxxed pope to succeed Bergoglio in the upcoming Conclave (though it is not clear if this conclave will be legitimate or not, see Cionci’s recent article)

While this news sounds very dire, a bright spot is that Bill Gates has admitted that massive popular unrest at governments world wide will be the major problem in 2022.  He also stated that Covid will be defeated in 2022.  His biggest fears is that the masses will no longer respond to any appeals for new initiatives on any basis or topic, so great will be the cynicism induced by what he calls “fake”  news and misinformation over Covid-19 and the vaccines — which if this report is true, means, that the Globalists have realized that the narrative is out of their control and they will have to reposition to remain in power.

This confirms what I said in my recent conversation with Dr Zelenko, which will be published in the next 12 hours, about the coming inflection point in 2022, after which there is no return to a Globalist control of the narrative.

18 thoughts on “BREAKING: GoldmanSachs Dictatorship in Italy to make DeathVaxx obligatory for all 18 yrs and older”