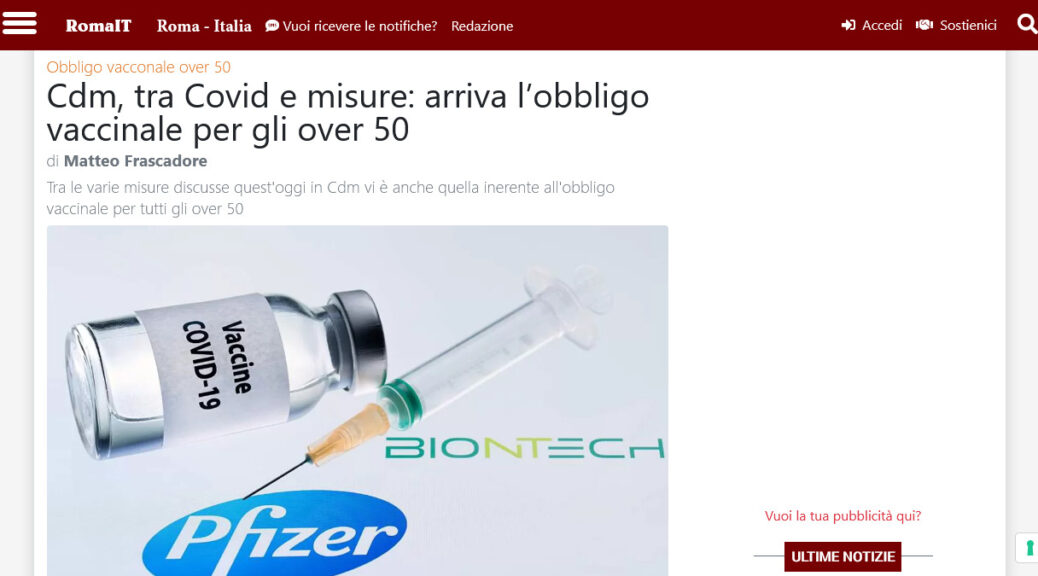 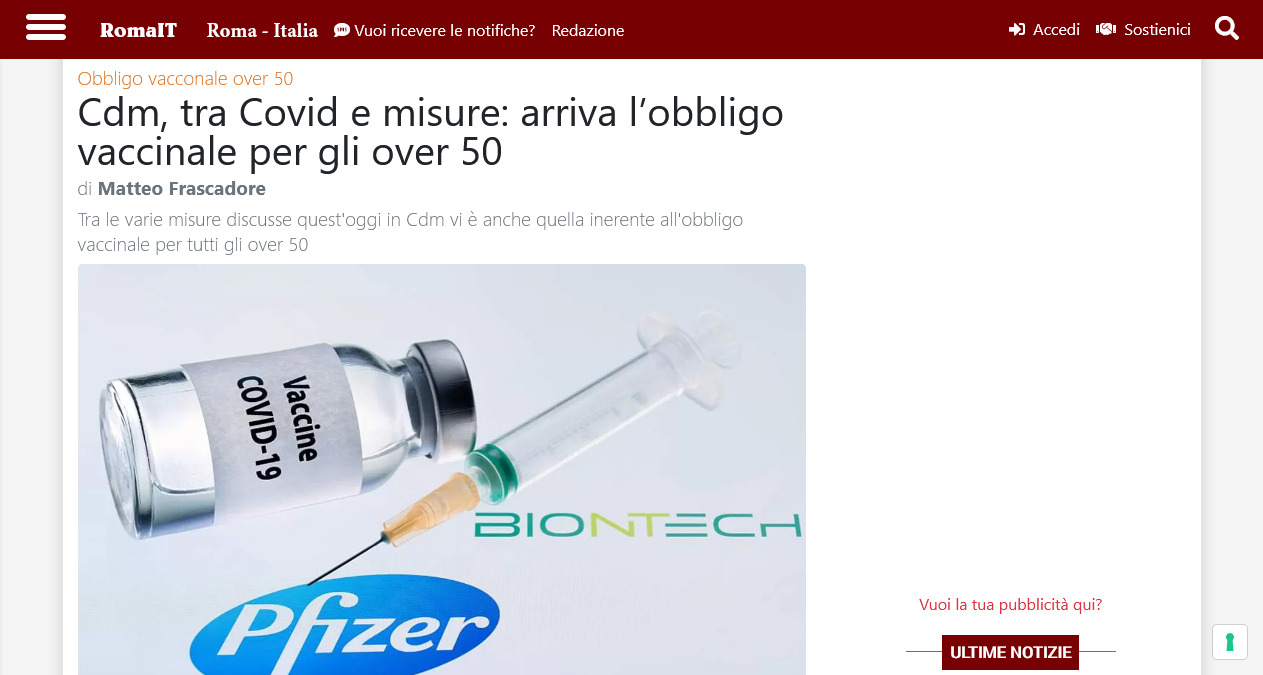 Mario Draghi’s Dictatorship has extended the obligation to take the DeathVaxx to all those who are 50 years old or older, not only citizens and residents of Italy, but even foreigners and tourists.

As I opined yesterday, this obligation is clearly directed against anyone coming to Rome during the next conclave, the majority of which clergy and laity would be of this age group.  Draghi is trying to prevent the election of any unVaxxed as the successor to Bergoglio.

And this is not surprising due to the close relations of Mario Draghi with the Masonic Lodges of Paris and London and the strong economic bonds with the CCP of China.

The obligation to take the DeathVaxx, however, appears to be vacuous. While the decree has not yet been published, it seems to be another proposal of administrative sanctions, which can be fought in court and never paid.  The decree, according to those who have seen a rough draft, will require that all over 50 years of age — the core of the adult resistance — take the DeathSerum by June 30, a date so far in advance that no one will rush to take it.

There is also included the obligation to take the DeathVaxx to work, by February 15th.  That is the real economy killer, because all the businesses to enforce this will be out of business in a year or two when all their workers are dead, maimed or incapacitated.

MOST ALARMING of all, however, this new decree will require the DeathVaxx Passport to enter the Italian Post Office (the people’s daily bank) and any private Bank.  This obligation requires the Jab or DeathSwab or proof of recovery from the Mythological Virus to enter. This may cause the greatest RUN ON ITALIAN FINANCIAL INSTITUTIONS IN HISTORY as every nonVaxxed rushes to remove all their funds before the deadline kicks in or out of rational fear that this is just the beginning to denial of all financial services to them.. This is especially true, because those over 50 years of age hold the majority of all funds in Italian financial institutions.

Since the per capita annual savings of Italians is roughly 2000 euros, the expected bank rush might wipe out 500 Billion or more Euros from the accounts of Italian financial institution.

This rush may not be visible, however, since most Italians have electronic access to their banks, and can wire the money to non Italian institutions or use it to purchase gold, diamonds, and other precious metals, which are usually purchased by bank wire, here in Italy.

The Lega, which through Giorgetti protested strongly the other day against extending the obligation of the DeathSerum, out of fear of causing the Government to fall, asked for the obligation only for those 60 years or older, thus showing themselves an enemy of all the retirees in Italy. Yet, Draghi has relented on his proposal for those 18 years or older, showing that he is weak.

Nevertheless, the core demographic which Draghi wants to eliminate: the pensioneers, is still gravely threatened.  By eliminating them Draghi wants to clear the balance sheet of debt which the Italial government is carrying. For the godless money-changer Prime Minister, such a decision is part of his “creative destruction” of Italy.

If this new decree, which has yet to be published, achieves anything, it will be to convince the resistance in Italy to grow and push back harder, because it has revealed the weakness of the Draghi government, the timidity of its members to be crueler, and the malignancy of its members: because whereas it imposes an obligation it also admits compensation for those injured.

On which account, all those ministers who sign on to this proposal will condemn themselves thereby to death at the future Nuremberg 2.0, because they have thereby become complicit in a program to forcibly induce human persons into a medical experiment, without their consent, when they know that this experiment is highly dangerous, a direct violation of the Nuremberg Code.