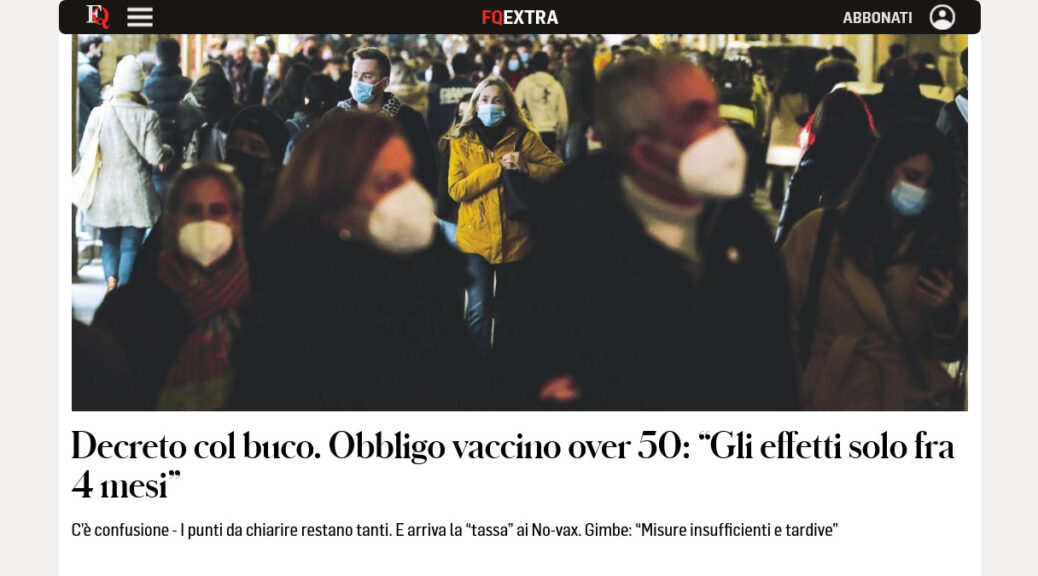 Details are now emerging about the new Sanitary decree of the Mario Draghi government.

Regarding the obligation to be vaccinated for all those over 50 years of age, this obligation goes into effect immediately and lasts til June 30.  But the penalty is only 100 Euro. However, unlike previous penalties this one is not an administrative sanction, but will be a tax imposed by the Italian version of the IRS and applied to all who are registered as resident in Italy, but whose personal data has not been entered yet into the National or Regional Vaccine databases for the Covid Death Serums.

Thus, it seems that the near 7 Million who are not vaxxed will be hit with this tax, and that the Draghi government expects to raise 700 Million Euro or so from imposing it.

However, the tax is only one time. Though, whose to say whether it will be repeated or raised after June 30. One can never know with the sort of maniacal psychotic pyschopaths which have seized power in Italy since January 30, 2020 A . D.

Here is the report by La Repubblica, the leading Marxist newspaper in Italy, on the situation: 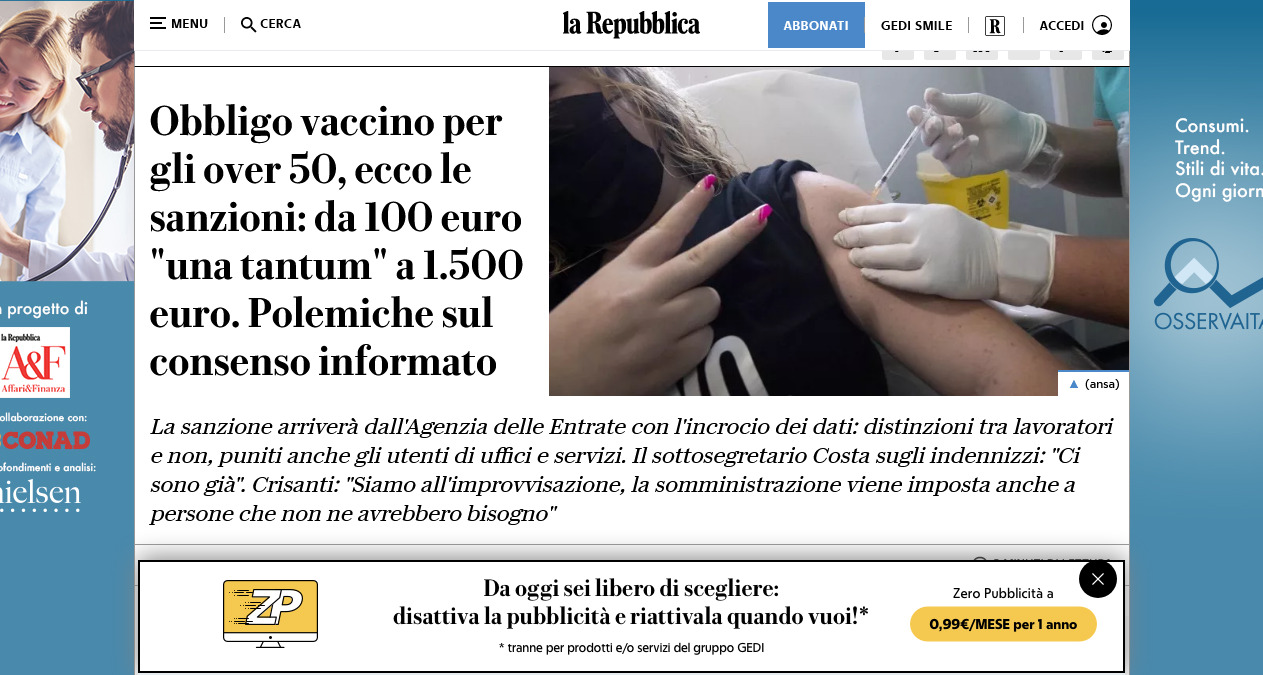 The Fatto Quotidiano, however, is reporting that this new decree is shot through with holes: 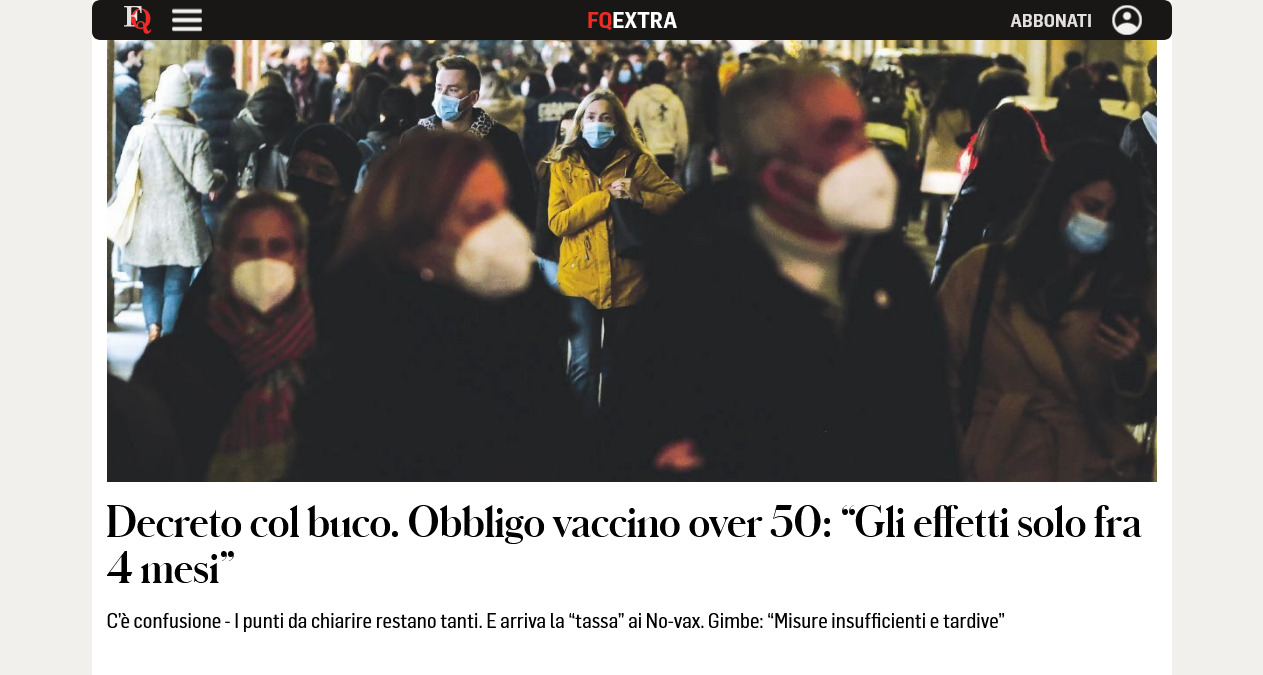 In which report, they openly call the penalty of 100 euros a tax.  This is perhaps the first tax in history for holding a thought which is not approved by the government. It represents a sort of marxist-capitalism! 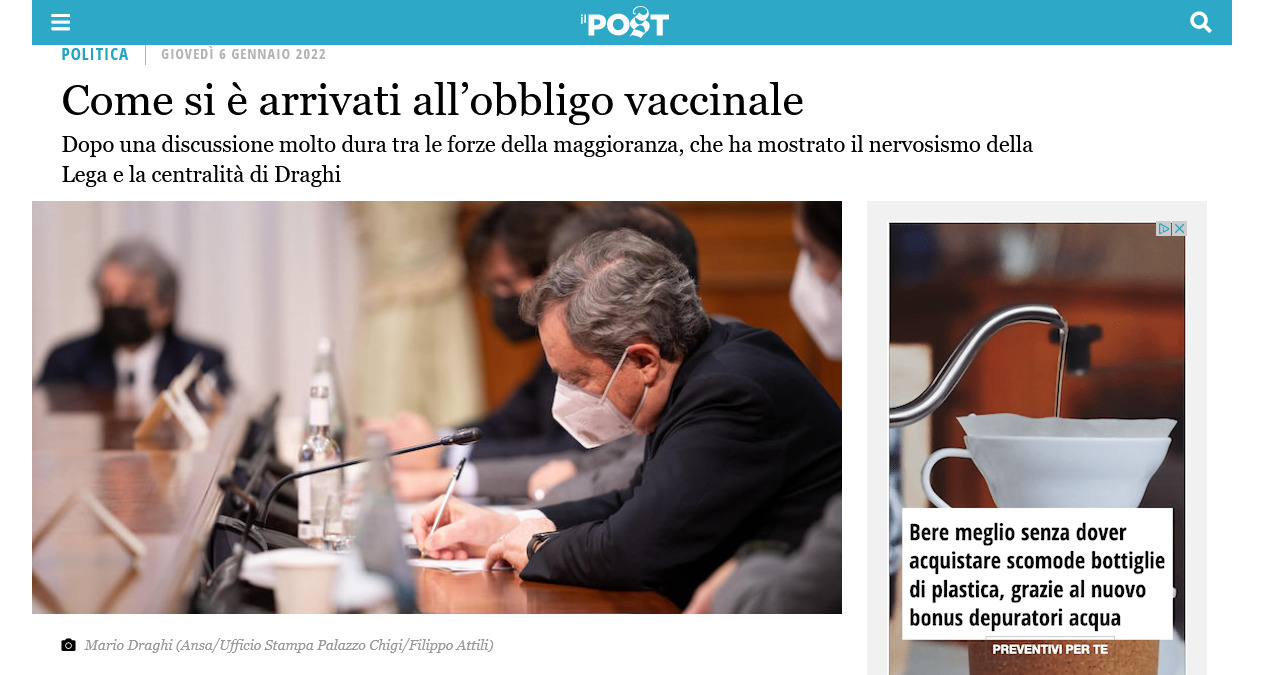 Italy follows Greece with a universal age-based DeathVaxx obligation. In Greece it is 60 years of age or more. While the Lega wanted the same obligation, Draghi managed to get them to agree to the 50+ category, which now seems to be merely a financial decision.  This is going to upset the Satanists who are running the Great Reset, because it shows that Draghi has failed in his devotion to their death inducing cult.

The DeathSwab will be required to get a DeathVaxx Passport so as to enter the barbershop, commercial malls, banks and the Post Office, and all other public buildings. It is not clear if this will be extended to the Church by the anti-Pope Bergoglio or by the State. I would bet the former, since he has always shown more zeal to serve Satan than has Draghi.  The fine for entering without such a Passport will be up to 400 to 1000 euros per violation. This will effectively remove 7 million shoppers from Italian stores!

Workers will have to be DeathVaxxed in all sectors, public, private, and free-lancers, by Febuary 15th. Here the fines are higher, 600 to 1500 euros, but only if they enter the workplace without a DeathVaxx Passport.  It is not yet clear whether this will affect telecommuters, which in Italy are called lavoratori agili. But it will affect the small shop keepers, who here to fore, have not been obligated to be DeathVaxxed.  This may cause the closing of 10s of thousands of small businesses throughout the nation.

We shall see on Monday, when the Italian Stock Market in Milan reopens, what real economic panic this Decree will cause, since the 7 million noVaxxers who are targeted hold perhaps as much as 80% of all the savings in Italian Banks.  These might very well begin to remove all assets and transfer them to foreign institutions outside of Italy.  That, in addition to the hammer blows of this Decree against workers, pensioners, and small businesses are tremendous blows to the financial stability of the economy. If the Market understands or even believes this, we might see historic down turns.

Draghi, in truth, is aiming to become President of the Italian Republic, for several reasons. First, since he was never elected to Parliament, he lacks all personal immunity for his crimes of fraud and genocide. Second, as President he gets a rich life time pension with added personal security detail for life. Third, as President he can manage who becomes and does not become Prime Minister for the next 5 years and so engineer his reelection for another 5 year term, if the Globalists do not do him in for failure, by then.

Pope Benedict XVI, the true Pope of the Catholic Church, remains in the Monastery of the Mother of God at the heart of the Vatican, where evidence is mounting daily that his network of supporters are lobbying for his restoration to power after Bergoglio croaks, which may it please God, happen as soon as possible.