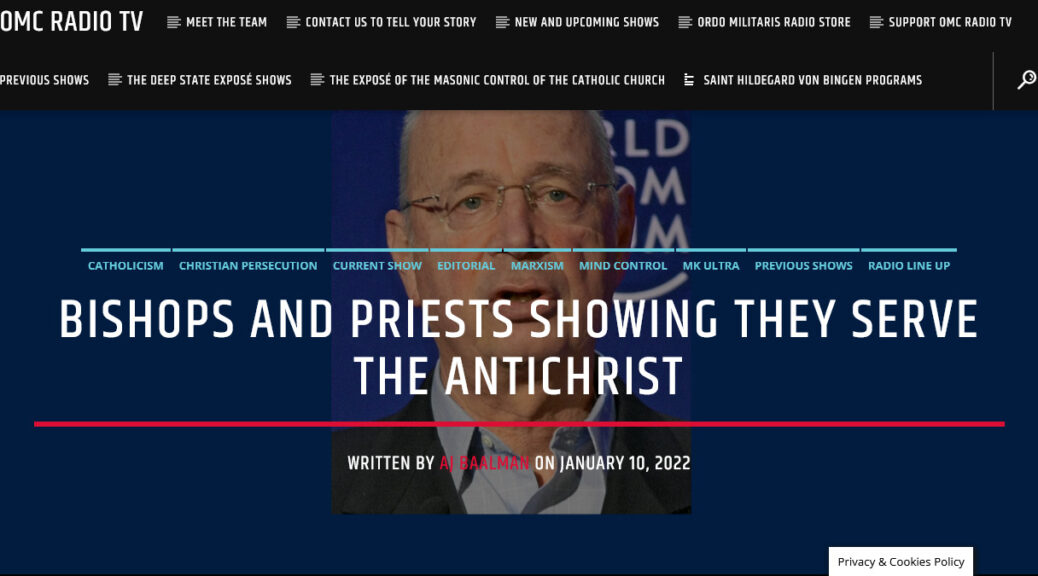 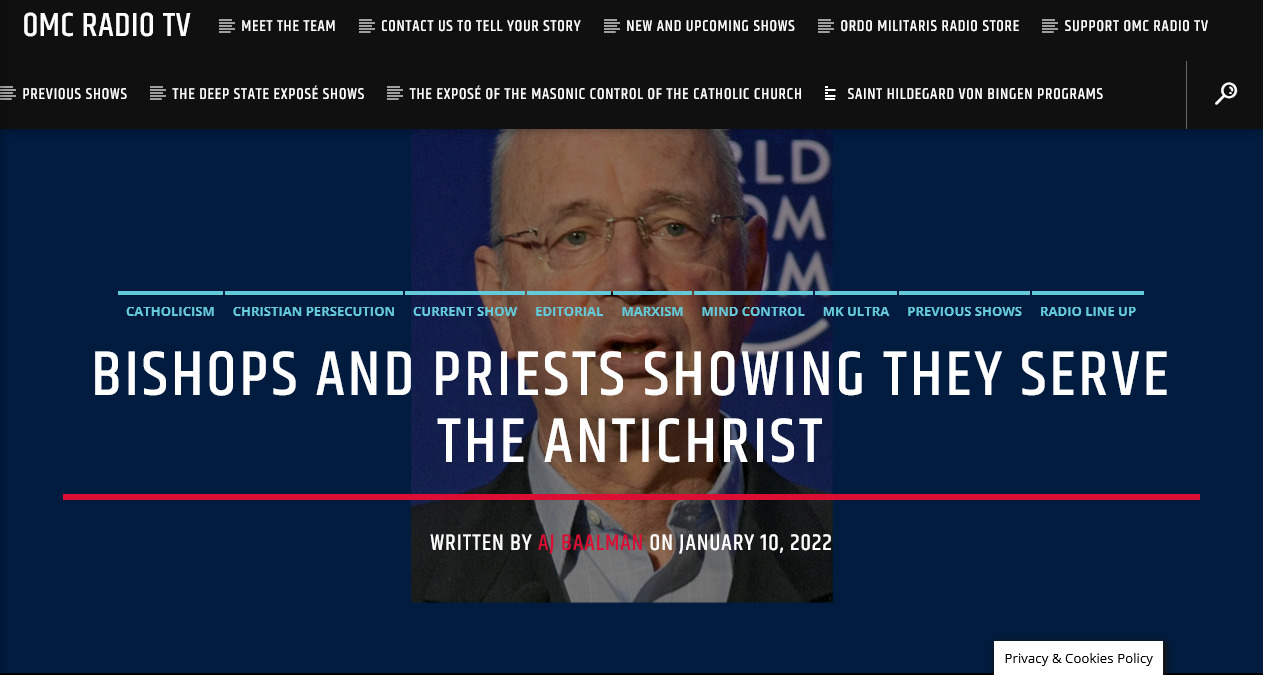 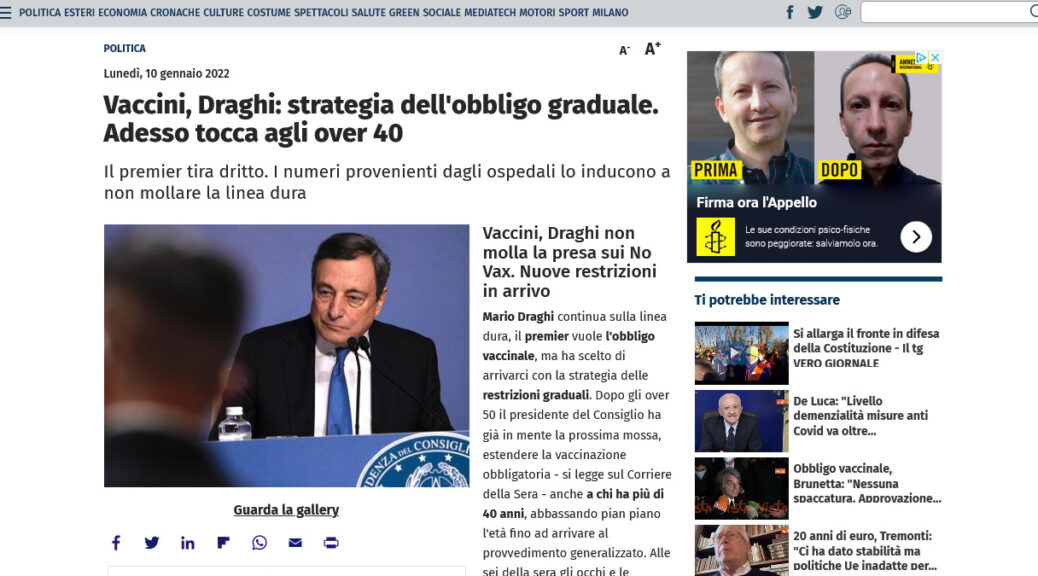 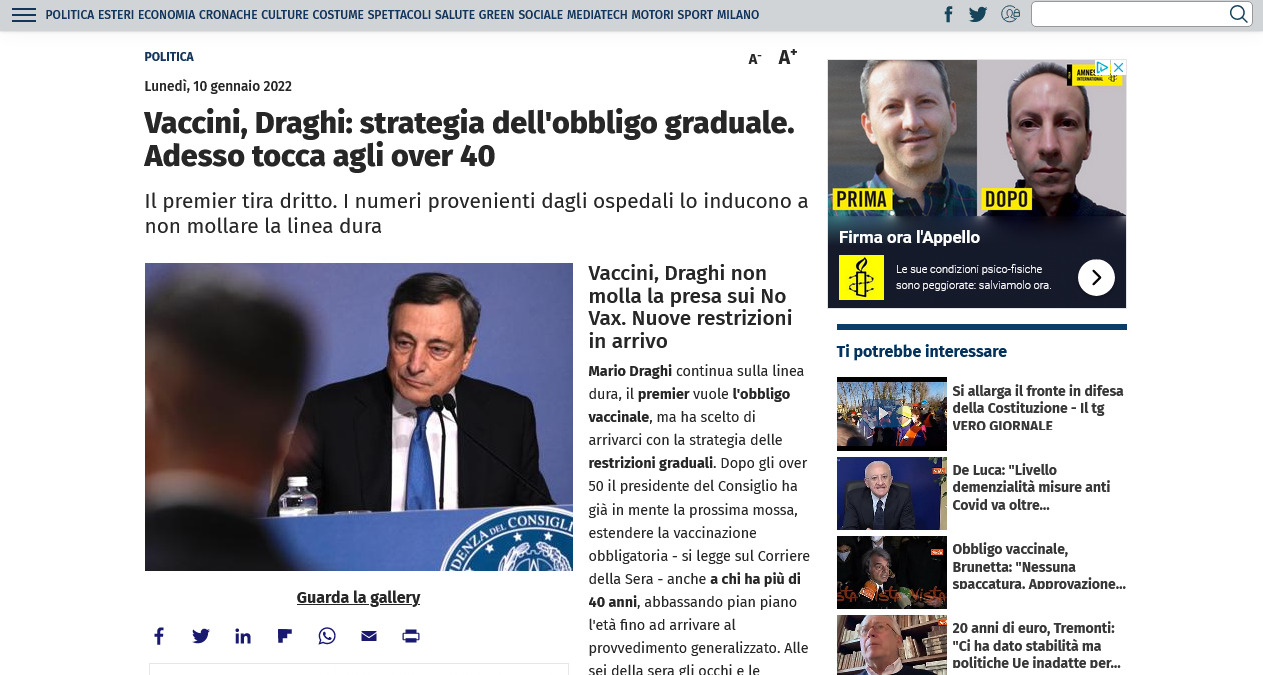 The dictated reason: to stop the new cases arriving in hospital.

The real reason: to kill off as many Italians as possible, before the Reset crashes.

Compliance leads to more tyranny, when the tyrant is a sadistic maniac. 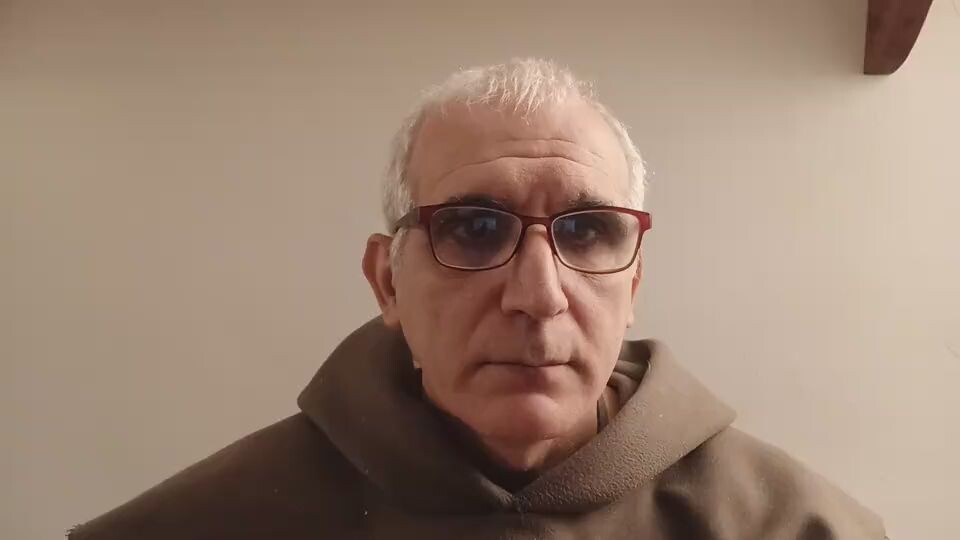 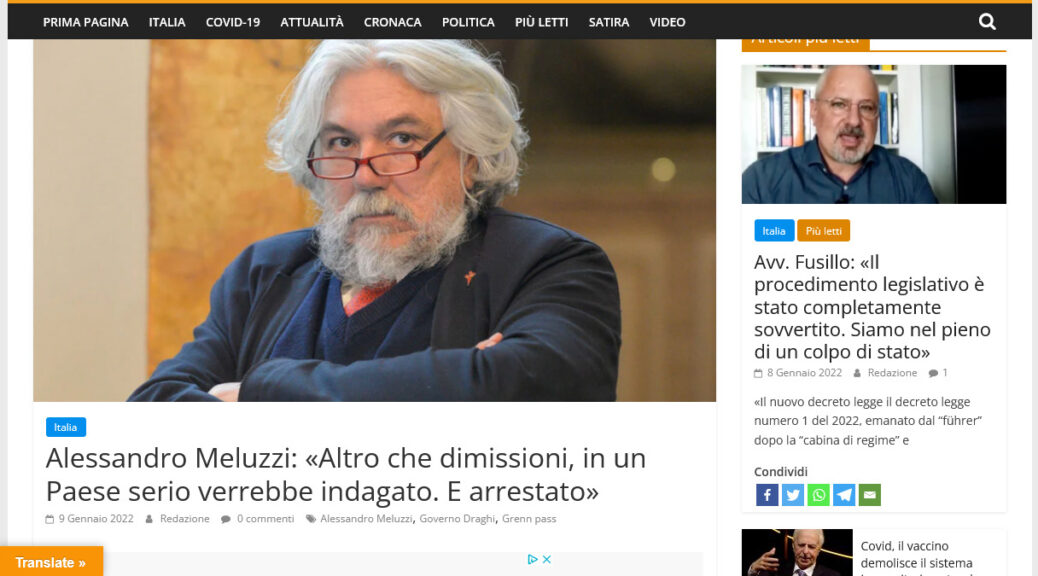 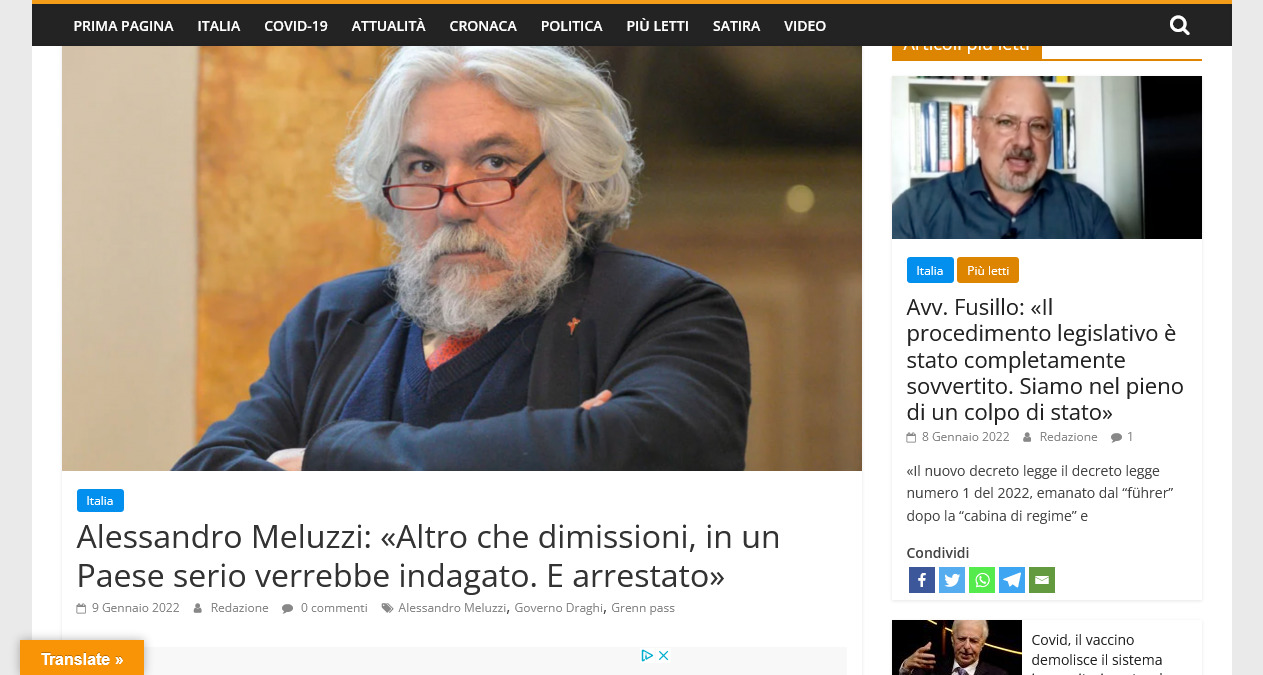 When asked on live television, whether Draghi should resign for having lied about the DeathVaxx Passport reducing the spread of Covid, Dr. Meluzzi responded with a nod to the communique from the Committee for the Salvation of the Republic, by calling for his arrest. He called the Prime Minister also an incompetent idiot.

This is the second major public figure in Italy to call for arrests, in a week.

Here is a list of the lies of Mario Draghi, to which it appears Dr. Meluzzi is refering:

1. “If you do not get vaccinated, you will get sick, die, or cause others to die” — FALSE
2. “The Green Pass gives you the opportunity to find yourself among those who are not contagious” — FALSE
3. “The great part of the problem has to do with the unvaccinated” — FALSE. 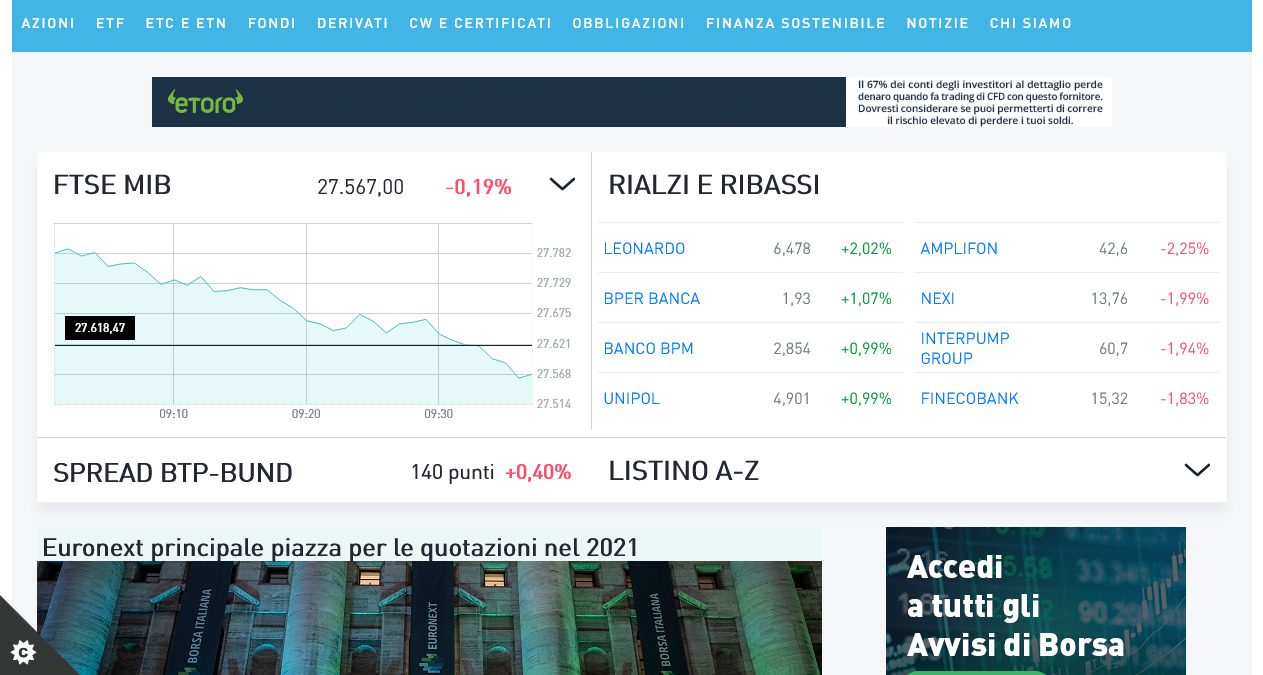 Editor’s Note: The Milan Stock Market was down 200 points in the first half-hour of trading, Financial services are taking the hardest hit, while the leading Military Industrial Contractor is surging. This reflects Italians fears for civil conflict in the new year, as well as a shift from digital to hard currencies. Down, also, is one of the leading hearing care manufacturers in Italy, most likely because, as the new Decree goes to war against retirees, there is speculation that they will not be able to afford these expensive devices. 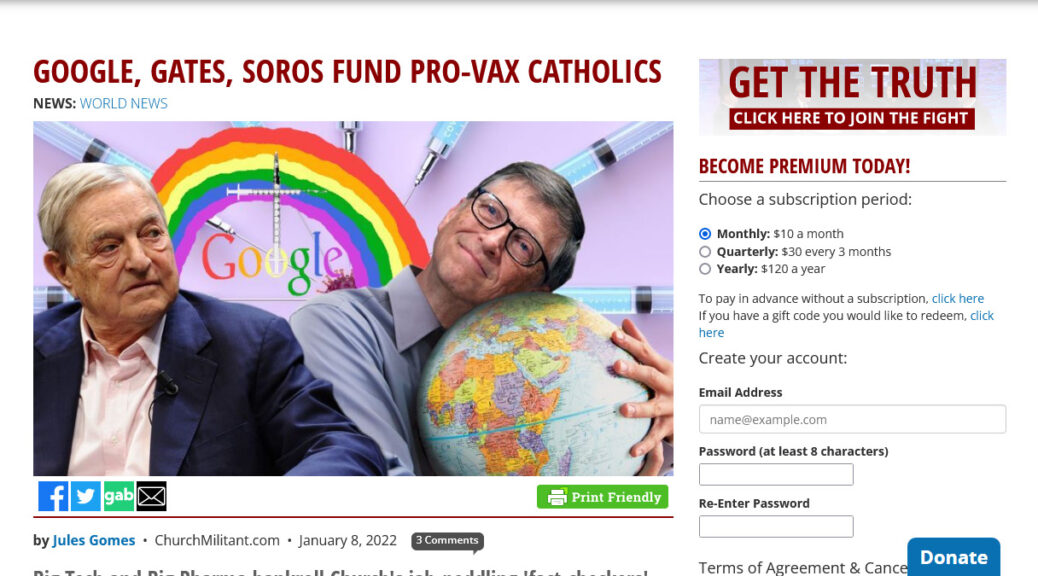 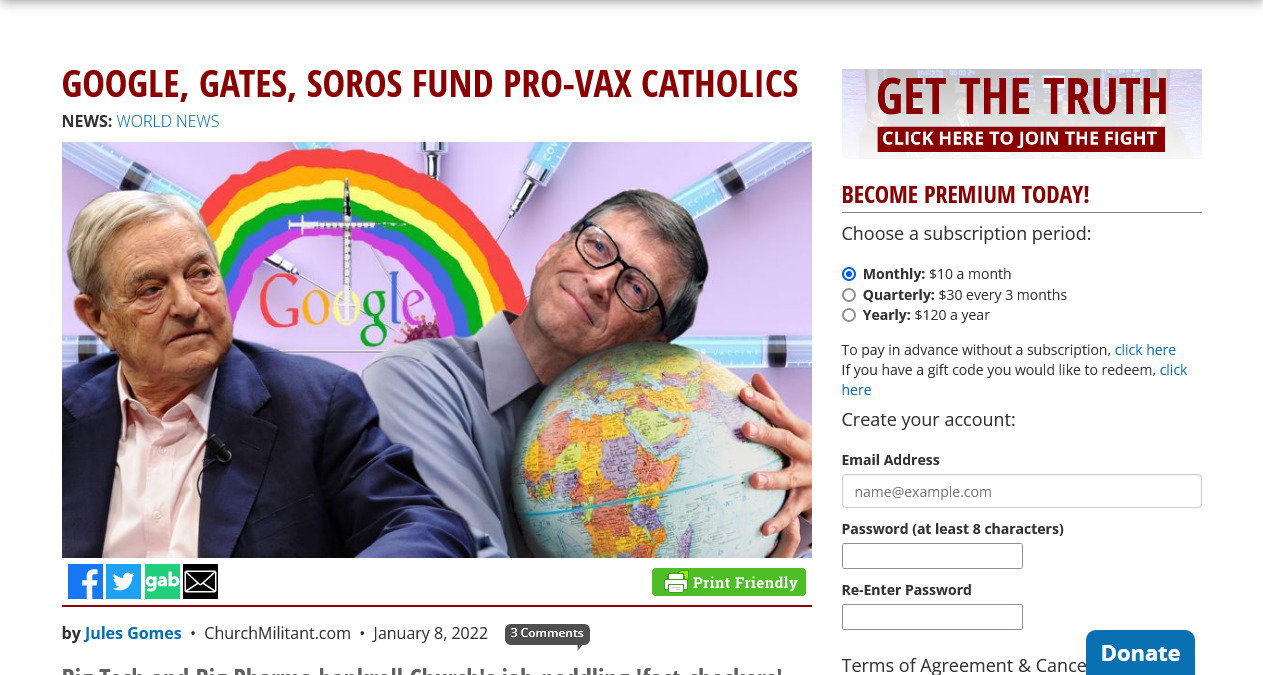 Editor’s Note: You can bet your rosary beads, that the international coordinated effort by Bishops to shut churches and remove holy water and throw Jesus around like a cookie, were specified terms in a promise to pay the Catholic Hierarchy who run Dioceses — all Judas Iscariots, to the last man — oodles of money as part of the new Globalist Church. The sacrilege and idolatry of the Pachamama in the Vatican was the test to show the Globalists that the entire Catholic Hierarchy would join their plot against humanity. I hope this suspicion is false, but I think the news in the next few years will prove it true. The first sign of such a plot, was when Bergoglio sent Parolin, his Secretary of State, to Davos in 2018. 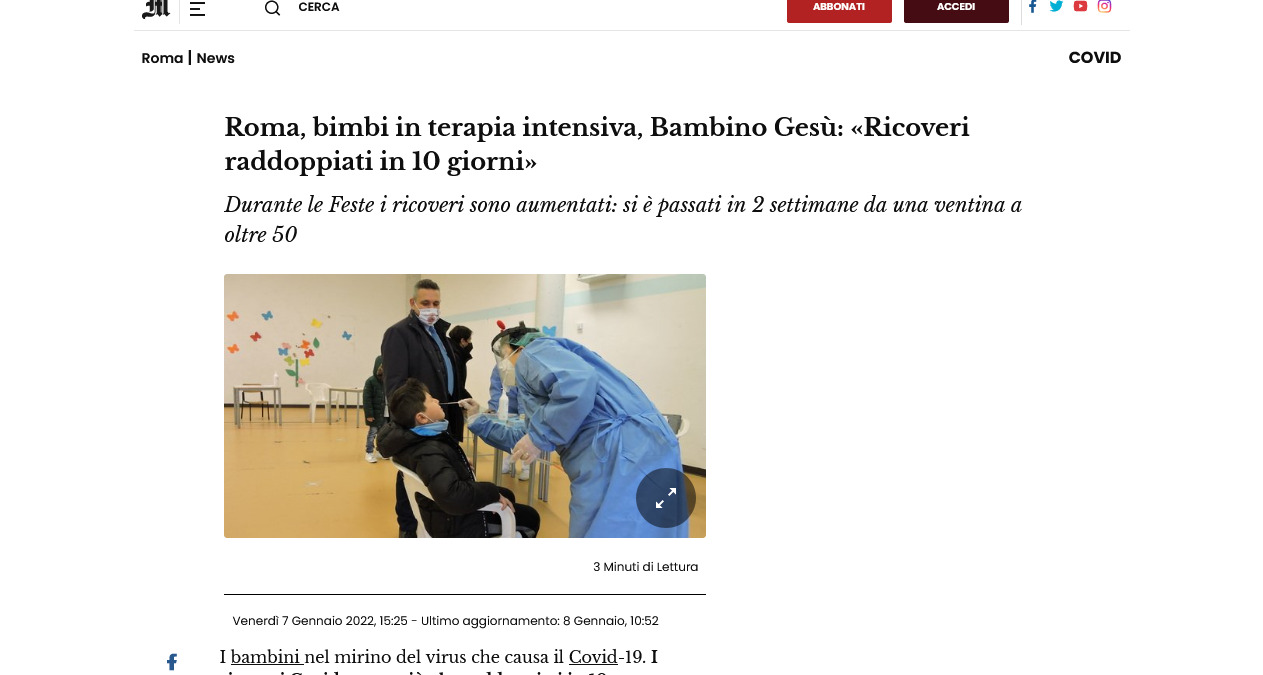 Editor’s Note: Bergoglio, who advocated child vaccination, will burn in Hell for each of these victims of the DeathVaxx. — The headline reads, “Rome, children in intensive care, at the Hospital Bambino Gesù:  ”Double the number of admitted in the last 10 days”.

The above article, in Italian, can be read in English via a google translation, here.

Here's a French article confirming that this happened:https://t.co/Ng0Kyed6DB

The judge also ordered the Australian government to release Novak Djokovic from his Melbourne hotel quarantine within 30 minutes of his decision. https://t.co/jqckkzcowl 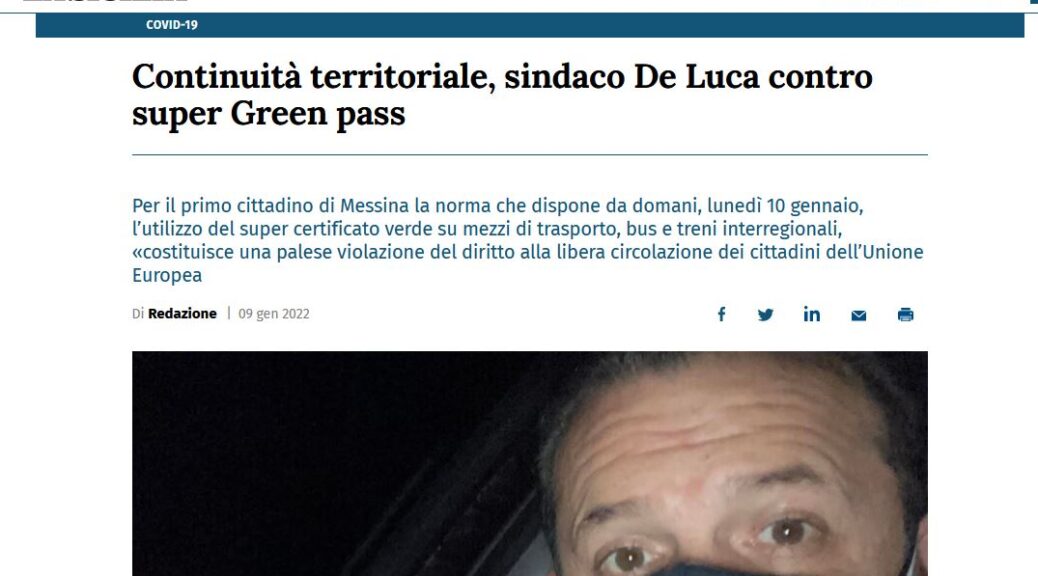 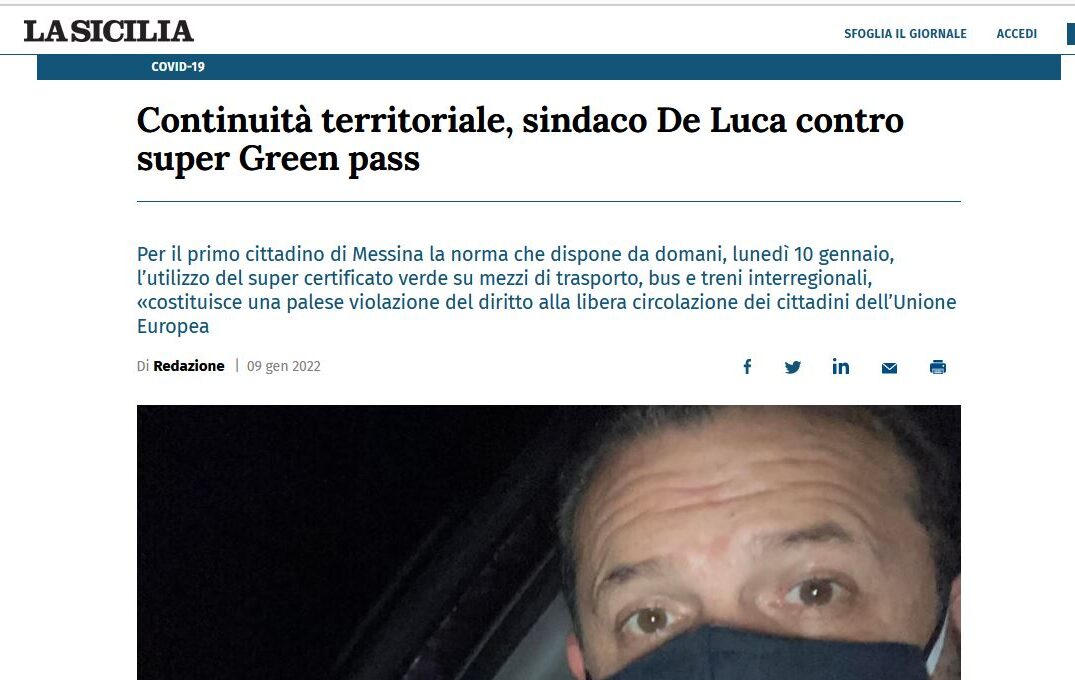 Today, January 10, 2022 A. D., the Dictatorial Decree requiring that one present a Super Green Pass (aka Super DeathVaxx) Passport, which can only be obtained by getting a full round of DeathJabbs, goes into effect for all those wanting to use public transportation, such as buses, trains or ferries.

But the Mayor of the most important hub of ferry traffic in the Mediterranean, is not having it.

Mayor Cateno de Luca will refuse to impose this requirement, and if the Government does not relent, he threatens to block all traffic between the toe of the Italian peninsula and the island of Sicily along the straight of Messina.

Messina is a most beautiful city, founded about 8 centuries before Christ, and situated on the north-eastern corner of Sicily. When liberty returns, I highly recommend a visit, to this ancestral home of my maternal lineage.

In a letter addressed to Mario Draghi, the Italian Prime Minister, and to the president of the Sicilian regioon, De Luca declared the requirement to present a Super Green Pass:

… constitutes an open violation of the right to free movement for citizens of the European Union and interrupts in fact the continuity of that Union with the territory of Sicily which is already gravely restricted.

Alas, he ends his letter, by groveling before the Covid-19 narrative and declares that he is not vax-hestiant. 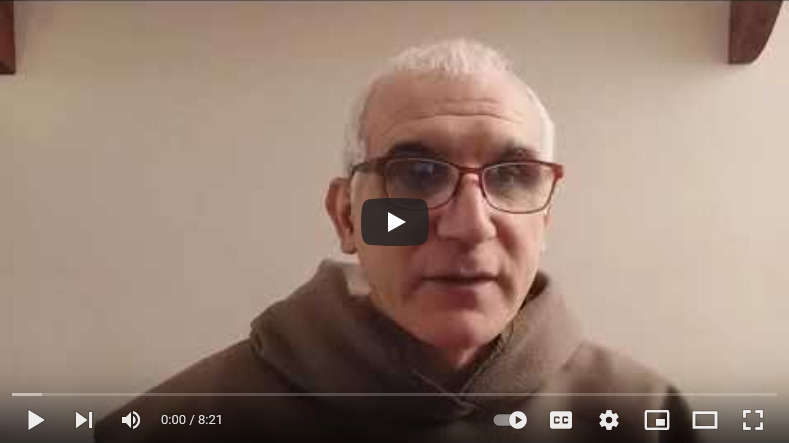 Editor’s Note: These are brief comments on the political scene in Italy. I am not repeating or translating them into English, because just as one does not hang out the family wash in public, so there are certain discourses in Italian which should remain in Italian, out of respect for the Italian people. 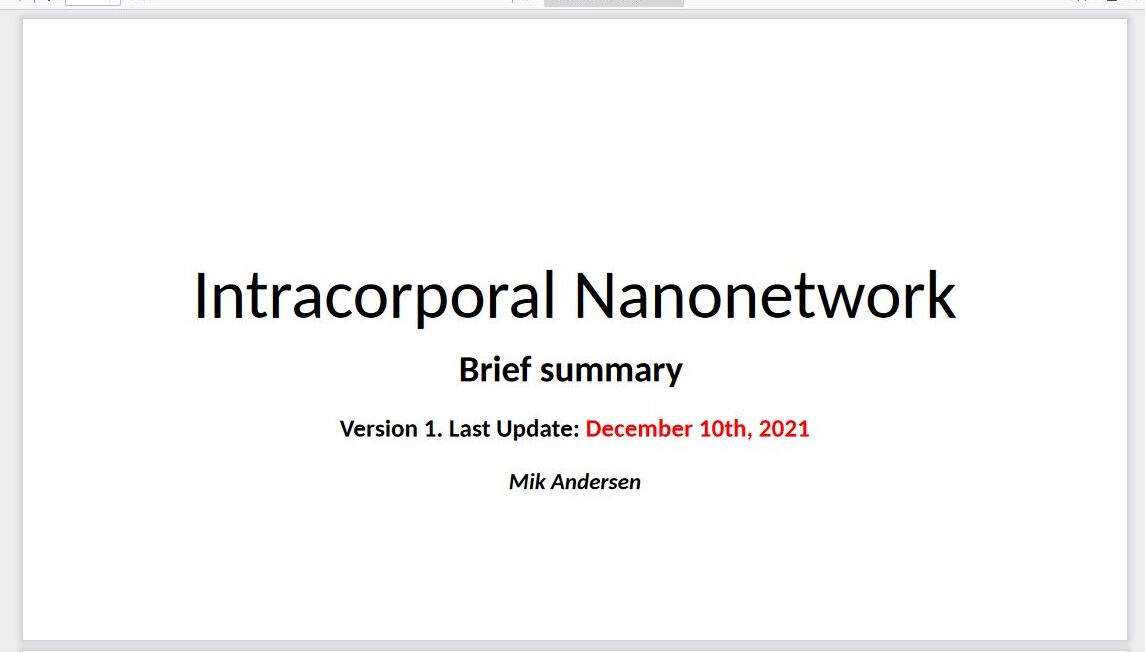