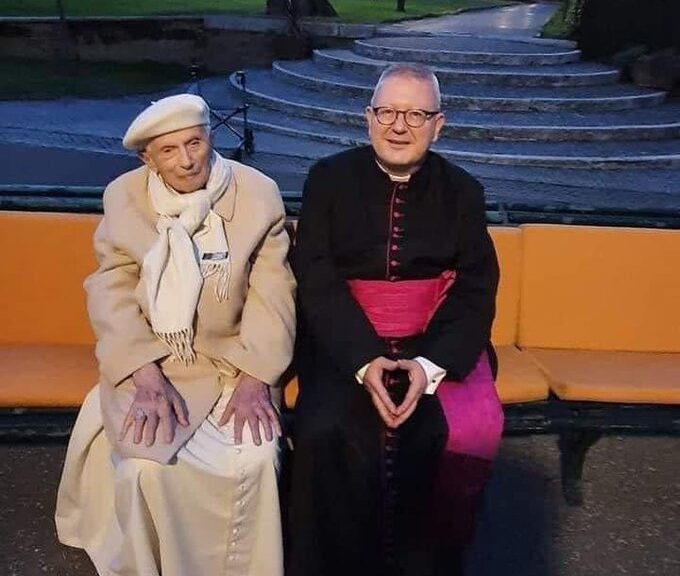 The Vatican for 8 years has effectively imprisoned Pope Benedict XVI. I have written on this before. in 2019, and it was taken up by George Neumayer, months later.  I reposed that question 2 weeks later. And further reports, such as here, here, here and here,  confirmed that common opinion held my many Catholics: because there is absolutely no reason in the world to block the mail and news to a retired pope, nor to insist that he return to the Vatican after a mere 2 days with his dying brother, rather than stay at his side until the end. — UNLESS he is a prisoner, and he knows he is a prisoner, and the Vatican knows he is the true pope.

There is also no reason to put specially guards especially trained in manipulation around a man if he is free, as I reported above.

So, having cared for my mother in her last years of life, and seen what happens to those who approach death, I am very concerned about Pope Benedict XVI’s rapid decline in health in the last 12 months.

He is younger than his brother, so he should have another 3 strong years of life, and he has had better opportunities at health care as Supreme Pontiff for the last 16 years, so his health should be in excellent condition.

However, in the last year it seems that he is being given a restricted calorie and protein diet.  News reports also claim that the Vatican has triple DeathVaxxed him, and convinced him to take them. Ganswein is the prime suspect in that attempted murder.

So I surmise there is a plot afoot to murder him by various means before Bergoglio dies to ensure a Bergoglian occupation of the papacy until the end of time.

The recent photo of the Holy Father, from the evening of January 31, 2022, seen above, strengthens my suspicion, as he has lost considerable body mass since his last public photo in June of 2021.

18 thoughts on “Pope Benedict XVI, yesterday, and the issue of his health & imprisonment”