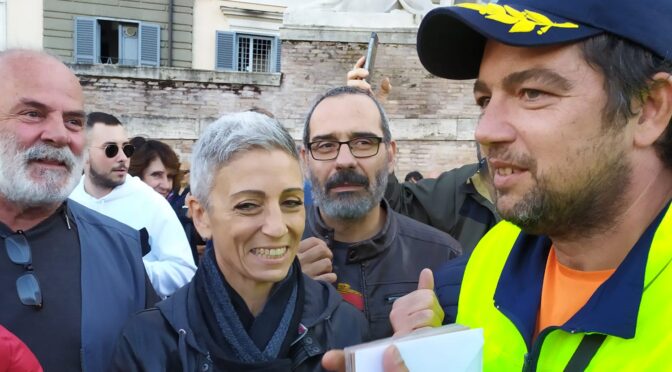 In a stunning revelation, the most visible leader of the opposition to the GoldmanSachs Dictatorship has publicly declared that he recognizes Pope Benedict XVI as the true Roman Pontiff.

The confession of faith was made in simple terms, during his interview on 100 Giorni da Leoni (a YouTube News/Commentary Channel produced in the Veneto) during the program, “Caionisti et portuali Uniti Con Stefano Puzzer” (Truckers and Longshormen UNITED with Stefano Puzzer). The host and publisher of the Channel is Riccardo Rocchésso.

Puzzer won national fame by leading with his peers a month long siege of the international port of Trieste in October. He came to Rome afterwards to demand to speak with the Government, as it has promised him through the Minister of Transport. When the promise was not fulilled, he set up a table in the Piazza del Popolo with chairs for the government and the Pope. — All assumed he wanted to speak with Bergoglio. But in this program he says, that is not the case. 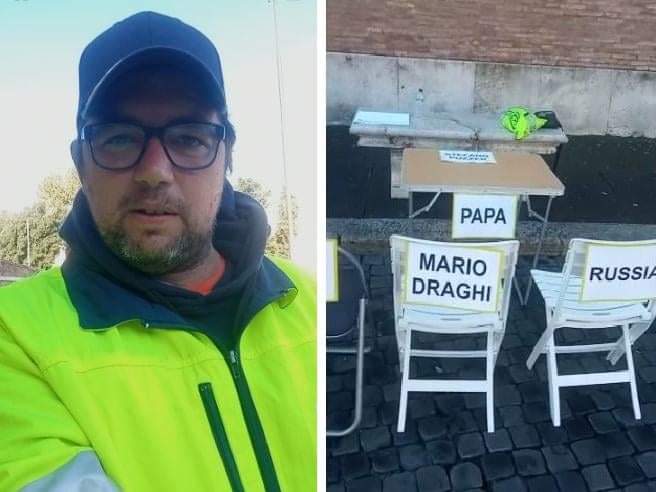 The response to his pause in the Pizza del Popolo was swift and violent. The Govt. took him into custody for 6 hours and ordered him never to return to the Capital in person during the next 12 months, and to return home before 9 PM of the following day!

At the time it seemed in explicable why the Government was so swift and forceful. Now I think we know. He had denied the Masonic High Priest of the Masonic Government, and they could not let him spread the truth!

FromRome.Info has followed the Puzzer story, here, here, and here. Puzzer publicly affirms to have taken the DeathVaxx and the DeathBoosters. He wears the DeathMask on occasion and believes the Virus is real and dangerous. He also declares himself to NOT be a no-Vaxx.  This makes his testimony for Pope Benedict all the more explosive.

Here is the Video in which he takes the initiative to make known his allegiance to Christ’s Vicar on Earth. Watch at the 32 minute mark:

Here is an Italian transcript of what is said at that moment:

Here is my English translation of the transcript. The conversation opens with a discussion of the blaphemous performance at San Remo, of one two-bit artist who poured water over himself and self-baptized himself, mocking the Sacrament. Only one bishop in Italy publicly lamented the spectacle:

[host: Riccardo Rocchésso] We will meet again in 22 mintues for an important program about the holy water stunt which Achille Lauro enacted.  And I tell you: attention, oh … one bishop spoke out. But we will speak of this in 22 minutes.  It will be an important program, guys! But one bishop, at least one bishop, spoke out. But all the others? guys! … truly .  it is .. why did he not attempt to offend the Muslims?

[guest: Stefano Pùzzer] Then, allow me to make another statement, I beg you, OK?

[guest: Stefano Pùzzer] I know you have things to do. But I say: Remember when I set up a chair for the Pope, at Rome? I was expecting Ratzinger!

[host: Riccardo Rocchésso] Look, I wrote him. But, there are certain things I cannot say … look: I will tell you in private.  But we are trying to get into contact with …

[guest: Stefano Pùzzer] Moreover, so long as the Church is full of gold and does not do what Jesus did, nothing will ever change.  I believe in this one thing: the Church is something else.  Oh well…

[host: Riccardo Rocchésso] It is important to be spiritual.  And concerning spirituality, everything is producing little fruit.  Thank you, again, Stefano … Good evening.

Stefano Puzzer is a union man, and has been all his life.  For him to acknowledge publicly that Pope Benedict XVI is the true Pope is an earthquake in Italian social media. It shows that the workers of Italy have rejected the Filo-marxist godless blather of Jorge Mario Bergoglioa