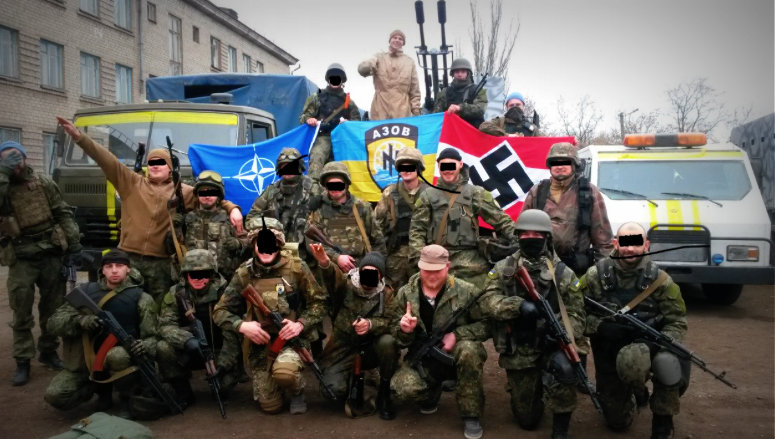 Today a faithful reader asked me in private this question. And having responded in private, I think my response is something worthy of an Editorial here at FromRome.Info. We need to move away from name calling in regard to the different views about the Russo-Ukrainian War and begin to think about the facts and reports that we see in the news.

So, here is my response to the Question:

What about all those photos of Nazi Flags in the Ukraine?

The answer to your question why you may see a Nazi flag or a Flag of the German Wehrmacht in the Ukraine, is in my opinion, that the Ukrainians were starved to death under Stalin. 10 million of them. So when Hitler invaded they saw it as a liberation. Many still think that way. They are not antisemitic or Nazis, they are just Ukrainian nationalists. In fact, here in Europe, when many youth want to irk a Marxist, they make a Nazi salute or Mussolini salute as they pass him. It has no historical significance to them, though. And if you ask them, you find that they are not Nazis at all, they are just grasping for something they barely know about as a sign of their present malcontent.

As for why Zelensk would be in a photo-op with such a flag — presuming that photo is authentic an not Russian propaganda — I think what I just wrote is the explanation, having actually met with Ukrainians in Europe and spoken with them at length..

When I compare this to Americans who often are seen with Confederate Flags, I find similarities. Having lived in the South (Florida, Alabama, Arkansas briefly) many years, though being from the North, I know that many Southerners show that Flag not because they want to start a civil war or are racists, but because they admire the culture of the south and the achievements of the South and want to display their disassociation from the culture or identity of the North.

Also, as I know happens in the USA, if the MSM finds one confederate flag — or as in Canada when Trudeau actually sent a friend to insert such a flag in the Trucker protest — the MSM uses it as a tag to pin on them to make them look bad. I see that the Russians are playing the same game in Ukraine. So I do not draw any conclusions from it, but I do continue to gather information on persons and groups.

I do not see Zelensky even being accused of using Nazi flags to genocide anyone or promote racism. His politics are quite the contrary. Nor is he a Peronist, who plays all sides. He knows, as I have explained, that the Azov regiment was founded to protect coal by a Jewish Oligarch. That some members waved those flags or use them as signs of Ukrainian nationalism, not National Socialism, is understood for what it is, not what scaremongers in the West would want you to believe it is.

And the claims of physical abuse or murder against units or persons in the Azov regiment or elsewhere, are, if they are true, signs of grave corruption, but not reasons to throw the 43 million Christians in the Ukraine under the bus. The Azov regiment moreover is composed of foreigners, not entirely, but it by no means can be claimed to represent only native sympathies.

Actually I think it is the non-Christians in the west who are trying to convince the Christians in the West, through these images of Nazi flags, to throw Christians under the bus in the Ukraine, so that the NWO objectives can be achieved. And I think Christians who fall for this kind of manipulation are very naive. Moreover, the present government of the Ukraine is doing more than any other government in the world right now to defend Christian families and preserve their traditional way of life. So to turn against that government because of a few flags I believe is totally insane.

In addition, one must understand what a flag is and what waving a flag means. A flag is a symbol. It is is therefore equivalent to a sign or word. Thus waving a flag is equivalent morally to saying something. But what you say means what it means in the context of what you do. If you wave a Confederate Flag while shooting Nazis in WWII, then you are clearly not signifying that you are a Southern racist who wants to lynch black people or start a civil war in the USA. You are signifying that you are an American who has the zeal and courage in battle as the Southerners did in their war of self defense.  Likewise if you wave a Nazi flag while shooting Jews, you signify something different than if you wave the same flag while shooting Russians. To ignore this is to allow ideological presuppositions to distort reality itself.

1) The Azov Battalion pledges loyalty to a Jewish President and Prime Minister.

2) Russian Federation Forces did destroy a Holocaust Memorial, and are destroying Christian Churches, but is not exclusively seeing out Azov members.

Now does Jesus say we should judge people by their words or deeds?

As for the photo which is featured above in this article, before you draw any conclusions, ask yourself where was the photo taken and whether the flags being flow were being flowed as memorabilia or a unit designations or political statements of the group or individuals. Otherwise, if you jump to conclusions to justify a war against Ukraine, someone might find a similar photo one day of youth in your own country and justify genociding everyone in your neighborhood on that account, while quoting what you said on your own social media profile about the above photo. So remember, crows come home to roost.

13 thoughts on “What about all those photos of Nazi Flags in the Ukraine?”