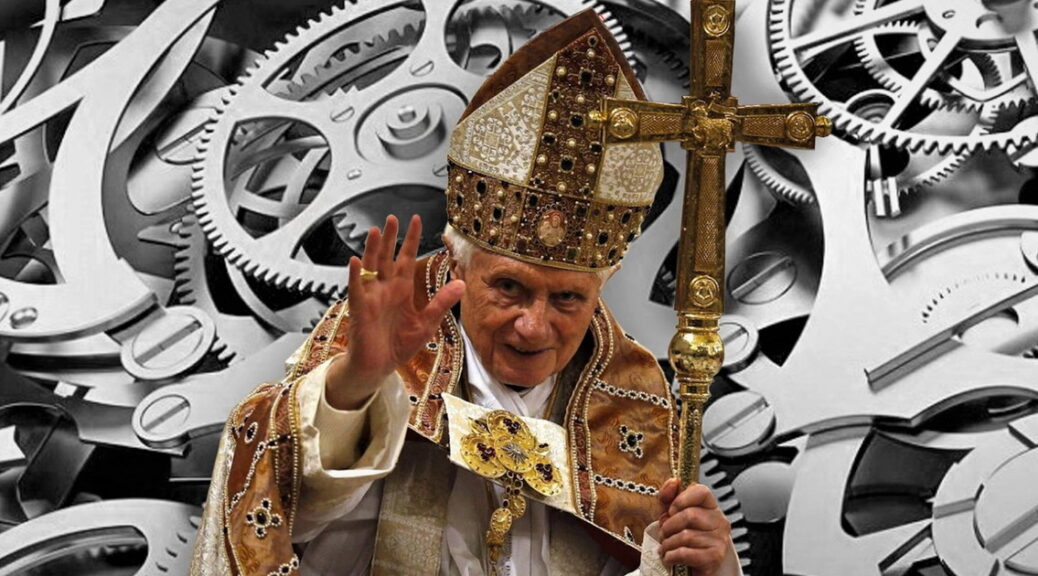 There are several strange things which happened on Feb. 28, 2013, which numerous authors, including myself have spoken of before. Among these are the fact that Pope Benedict XVi flew to Castel Gandolfo, and did not return to Bavaria. Another, is that he chose to speak to the crowds at 5:30 PM, even though he had announced his renunciation of ministry at 8 PM.  Then there was the bizarre statement, “After 8 PM I will not longer be the Pontiff Supreme”, which the Vatican Press concealed from the public by transcribing it as “Supreme Pontiff”,

Of this latter, Andrea Cionci, a native speaker of Italian, explained how this inverts the meaning from that signifying the papal title, to that which signifies the usurpation of power by another pretender, a subtlety only an educated Italian would notice.

But now, tipped off by a member of the Roman Curia, Cionci launches his major attack:  Pope Benedict XVI indicated clearly to members of the Roman Curia that the Conclave of March 2013 would be invalid and elect a usurper.  Was anyone listening?

Here is how Pope Benedict XVi did it, in a way only those who have spent a lifetime in the Roman Curia would have noticed:

He spoke to the crowds from the public balcony on the front facade of Castle Gandofo. You can see this in my report from Feb. 28, 2021:

I remarked that day, that the balcony was decorated above it by an ancient sun dial, which was used to tell time before modern era. In fact, as Cionci reports, it was inscribed to measure time according to the old Papal standard, where each new day begins at 6 P. M., following the liturgical calendar, where the Vigil begins the new day at sundown.

And he indicates this, when he ended his address that evening, because he said, “Bounanotte” to the crowds below, instead of the proper Italian salute for the evening, “Buona sera”, which indicates that night has not yet fallen.

Now some authors have speculated that he did this to indicate that after him would come a spiritual darkness, but Cionci’s tipster in the Vatican says it was to indicate that he was measuring time according to the Papal standard.

And that makes his entire phrase a perfect signification: for at that hour the Dean of the College of Cardinals had announced he was to convene a conclave to elect another pope. A thing which was illegal, uncanonical and unjust, seeing that Pope Benedict XVI had not abdicated.

So Benedict XVI has, by this short phrase, “At 8 P. M., I shall no longer be the Pontiff Supreme”, followed by “Buonanotte”, has left his own personal canonical testimony that he regarded the Conclave of 2013 as illegitimate, and its elected Cardinal, an antipope.

And this confirms Cionci’s and my own interpretation of the Declaratio: that Benedict XVI in saying that a new pope will have to be elected, “by those who are competent”, expressly indicated that the Cardinal in his presence would be in schism from himself if they did not understand that he was not abdicating.

For more on this, see my article, Pope Benedict XVI: Time Lord.

UPDATE: The English translation of Cionci’s article is now availabe: