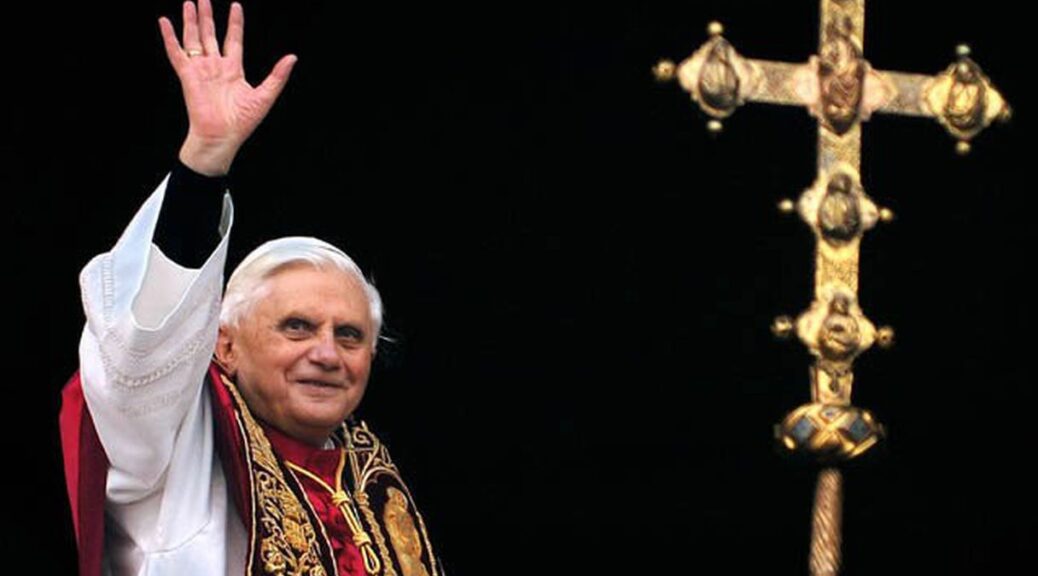 Providentially, he was born on an April 16, which was also a Holy Saturday, like today.  Pope Benedict XVI was given the name Joseph Ratzinger at baptism. April 16 is also the Feast of Bl. Benedict Joseph Labre, a poor pilgrim who wandered Europe, and who died at Rome (buried near the  Pontifical University of St. Thomas Aquinas).

II. Pope Benedict XVI is the oldest living pope in the history of the Catholic Church.

Since the winter of 2012, there was an active conspiracy to drive Pope Benedict XVI to abdicate. This began with the theft of his personal correspondence from the desk of Father George Ganswein in January. In February 11, 2012, an assassination threat was revealed by Cardinal Papalardo of Palermo: demanding that Pope Benedict XVI resign within a year or else.

During the course of 2012, the revelations of betray and the untimely death of a close friend were calculated to put the Holy Father under the maximum psychological pressure. Since 2010, demands from the heretical clergy of Austria and Germany insisted on his resignation and threaten schism if he failed to comply. Then in January 2013, the SWIFT Banking system, headed by a CEO who was a Rothschild agent, shut down all bank-wires to and from the Vatican. Deutsch Bank followed suit by shutting down all the ATM machines in Vatican City. As the Cardinals arrived in Rome, in early February of 2013, a demand was made for Pope Benedict XVI to resign.

IV. The Globalists had to get rid of Pope Benedict XVI so as to prepare for the Scamdemic and Great Reset

Pope Benedict XVI was and is an ardent opponent of relativism. He warned the faithful repeatedly of a dictatorship of relativism which was being prepared worldwide. He chided the Globalists by saying the New World Order would fail if it did not take the Child Jesus as its guide. He condemned vaccines made from aborted babies. He insisted that Catholics practice faith in Jesus even as a contradiction to the dearest and most cherished values of modernity.

It would have been impossible to launch the fraud of the Scamdemic and to push transhumanism and world enslavement with Pope Benedict XVI as the moral leader of Christendom. His elimination was a necessity.

In 1983, Pope John Paul II issued a new Code of Canon Law, in which he changed the requirement for a valid papal resignation. He made the canon, now 332.2 allow for an apparent resignation, in which the Pope would renounce something similar but not equal to the Papal Office. He did this with the counsel of Cardinal Joseph Ratzinger.

Using the plan he had prepared with Pope John Paul II, Pope Benedict did not abdicate when the Mafia of St. Gall and Globalists demanded that he do so. He renounced the ministerium instead of the munus, the key sign required for a papal resignation. Thus the enemies of Christ, being deceived, became so giddy with glee that they failed to examine the Latin text of his Declaratio of Feb. 11, 2013, and proceeded to elect the Globalist Puppet chosen by the CIA: Jorge Mario Bergoglio, Cardinal Archbishop of Buenas Aires, Argentina.

Pope Benedict XVI did this in obedience to a divine inspiration given him in the previous summer. Recognizing that the entire Curia was opposing him, as Christ’s Vicar, he realized that he had to declare to the world, in a way Catholics could eventually understand, what was going on. His declaration whereby he renounced the ministerium, instead of the papacy, effectively put the entire Vatican apparatus in a position of illegality. The conclave which followed never legally existed, was illegitimate and elected an anti-pope.

VII. The World was fooled by the Fake News that Pope Benedict XVI had resigned, because no one examined exactly what Benedict did

The international press, run and controlled by the Globalists, scored its first great victory to prepare for the Great Reset by fooling nearly the entire Catholic World into thinking that Pope Benedict XVI had abdicated. An entire panoply of voices opposed to expelling pedophiles from the clergy, wanted Benedict gone and rejoiced at the thought he had resigned. They began to gaslight Catholics everywhere who raised questions about the real meaning of the Declaratio.

Overtime however Catholic Experts have discovered the fraud of the news of that day, and are remounting an international effort to restore Pope Benedict XVI, begin a Catholic Reset and overthrow Globalism. We invite you to join us, on twitter at @B16Restore.