When a very admirable person of note and fame to all the readers of FromRome.Info drops a word-bomb on her blog, we all take note. It’s very noteworthy, however, that on May 14th, of this year of our Lord, she admits to engineering a smear campaign against a fellow “Benedict is the Pope” fighter.  The level of animosity and untruth in her words exceeds any attack she has ever made on Books of Lies and politicians. There is something very dark here.

But for your information, I will just republish her words and let you evaluate them:

“Many people have asked why a certain layman masquerading as a “Franciscan friar” is NEVER mentioned on this blog. Welp… now you know. TOTAL GRIFTER. He should literally be in prison for his larcenous schemes. And I don’t care who he thinks the Pope is. The guy is a larcenous fraud – who is now trying to profiteer and GET LADS KILLED AS MERCENARY CANNON FODDER OF THE SODO-JEW ZELENSKY REGIME IN UKRAINE. Thank God I’ve been able to warn all of the big players – for lack of a better term – off of him, and his damage at the levels of the Church that actually still matter has been totally neutralized.”

Here is the screen shot: 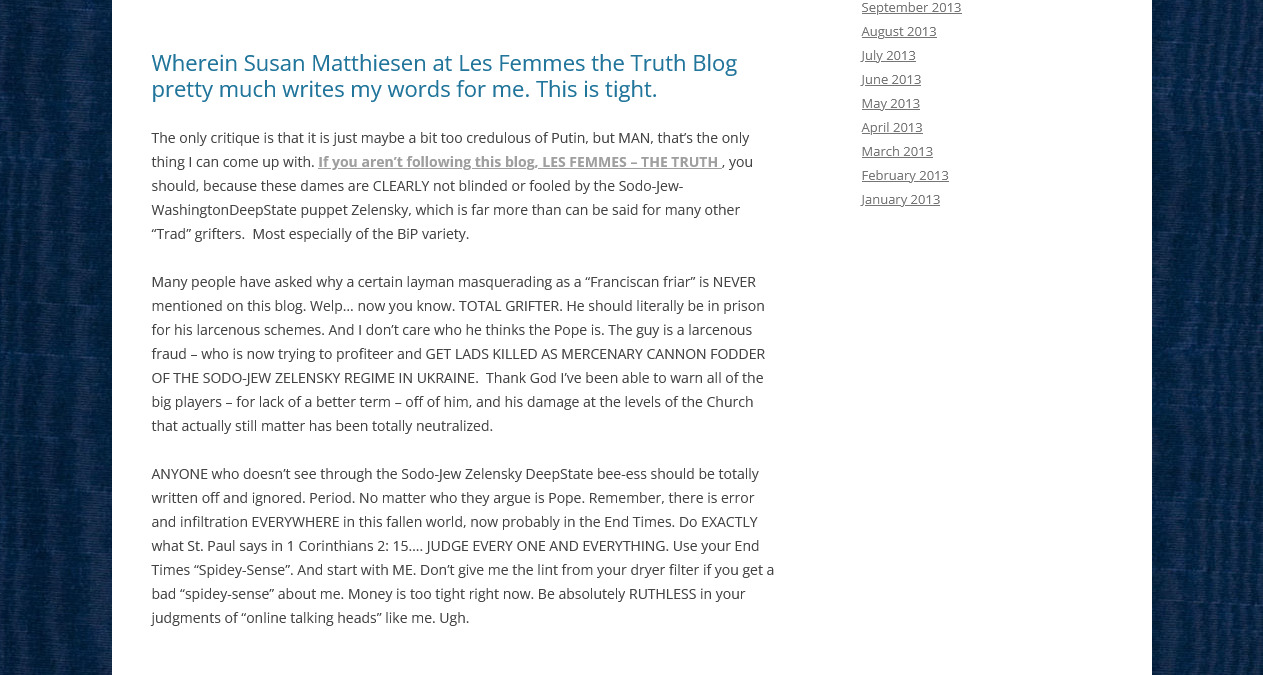 I do no know what triggered Ms. Barnhardt. Perhaps it was Andrea Cionci’s recent bilingual video in which he dismantled, with perfectly irrefutable logical analysis, that Benedict XVI had made a substantial error in his Renunciation of Ministry. Cionci did that on his own initiative, as far as I know. And Cionci is a layman, not a franciscan friar.  But he published his video on the same day Barnhardt made her confession.

UPDATE: More than a month later, an investigation, found that it was not anyone Ann accused, but Ann Barnhardt herself who was adjudicated by arbiters to have been liable for $100,000 USD for “constructive fraud, fraud etc.”. So this attack by Barnhardt was really a case of psychological projection. She later even accused Cionci of being a “pirate”!

I am all for confessing sins. Now let’s pray for the grace of contrition!