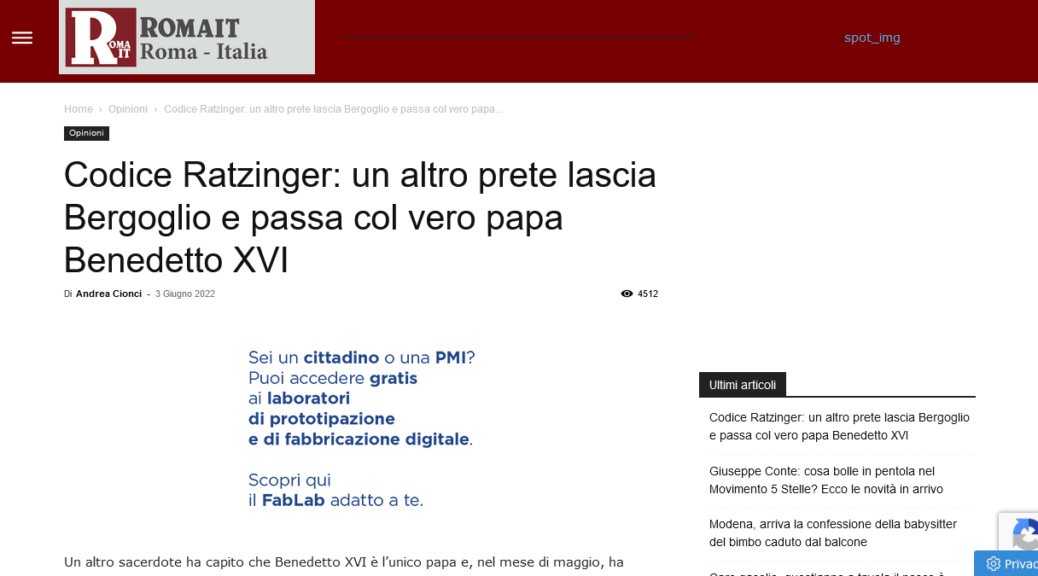 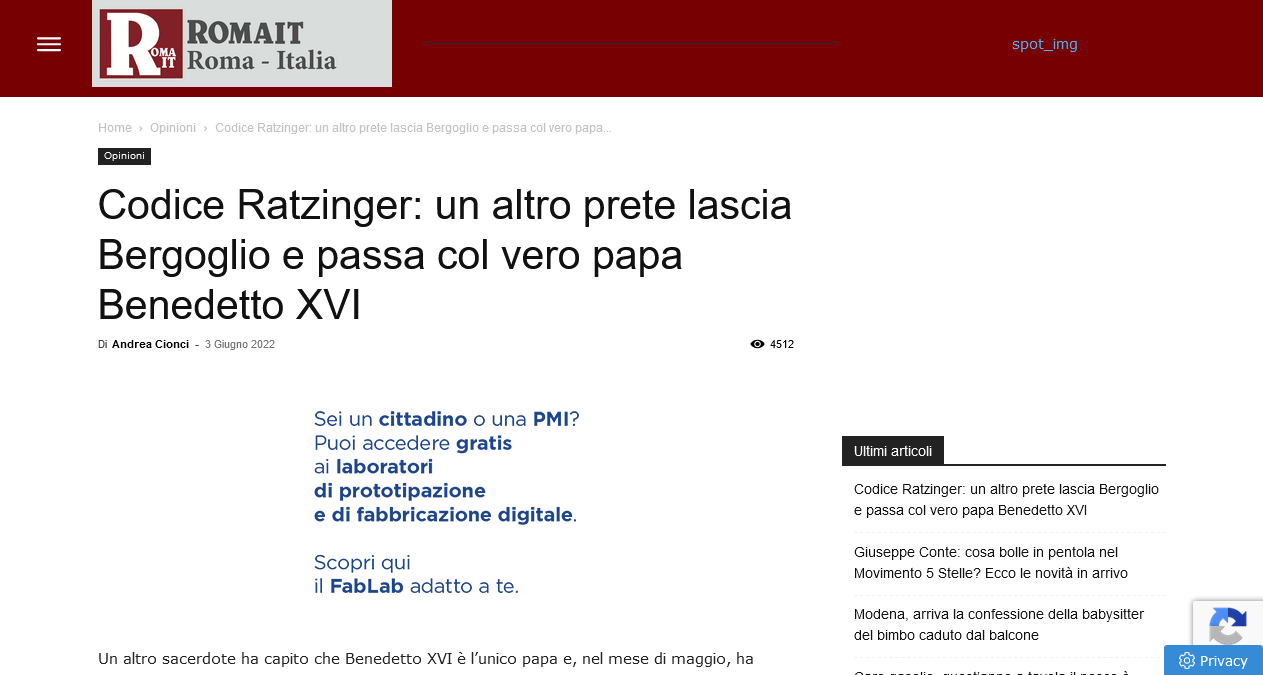 Another priest has understood that Benedict XVI is the only pope and, in the month of May, he wrote a formal declaration to his bishop which, with his own authorization, we report below. For reasons of delicacy we have omitted his name, but we will soon hear about it.

Remarkably, the father, Austrian by birth, but Italian-speaking, also made this choice following the writer’s inquiry, as he himself argues, citing the book just published for the types of ByoBlu “Codice Ratzinger” .

Even more interesting is that the priest was previously convinced by the theory of “substantial error”, that is, that the Holy Father Benedict XVI was “wrong” in writing the Declaratio of the alleged resignation because his conception of the papacy would have been vitiated by ancient slips modernists who, like so many, had also influenced the young theologian Ratzinger 60 years ago. Errors from which he himself had then publicly amended after his meeting with the “great theologian” (as he defined) Hans Urs von Balthasar, great antagonist of the supermodernist Karl Rahner, true “winner” of the Council.

The thesis of the substantial error, in fact, does not hold up in the face of the now encyclopedic demonstration of the sentences in the Ratzinger Code, certified by various specialists , with which, as you know by now, Benedict XVI himself describes his canonical situation of impeded seat in the which one is.

The courageous Austrian priest, now, could run into the “mercy” of the antipope Francis, as did Don Minutella, just “reduced to the lay state” without any canonical process. A not just false step for Bergoglio: if there is an act in the life of the Church that must be very clear and unequivocal, it is precisely that of the abdication-election of the pope: papa dubius, papa nullus.

In fact, if Francis had “what it takes” to be pope, the question with Don Minutella and all the other ecclesiastics who have declared the truth, (that is, that Benedict is the pope), could have been resolved in the middle of the afternoon: a clarifying meeting, even with a bishop who had explained to Don Minutella how the abdication of Benedict and the election of Bergoglio did not present the slightest legal problem. But no: two excommunications (two!), Media beatings, hacking, persecution, bullying of confreres and now a pseudo reduction to the lay state. “Pseudo” because all the measures imposed by the antipope are null, as explained by Friar Alexis Bugnolo .

And here is the letter from the Austrian priest

With his renunciation (Cionci: deferred however) of the “ministerium”, however, Benedict also voluntarily placed himself in the “seat impeded”, (canon 412), and it is for this reason that he can speak from this “prison” only in a codified way . In this context, there has also been talk of the “Ratzinger code” for some time. A book by Andrea Cionci dealing with it has recently been published in Italy.

Other facts – such as the existence of the so-called “Mafia of St. Gallen”, the lobby of progressive cardinals who wanted to prevent Benedict from becoming Pope as early as 2005, or the fact that Benedict continues to wear the white cassock, has kept his name, allow us to address him with “Holiness”, to sign himself as the legitimate Roman Pontiff with PP (Pater Patrum) and to give the Apostolic Blessing, or even for Cardinal Bergoglio to have canceled the title of “Vicar of Christ” for itself – they are further pieces of the puzzle that, for me, form a whole.

Some argue that the adhesion of the College of Cardinals, doctrine of the “Universalis ecclesiae adhaesio” to Cardinal Bergoglio led to a “sanatio in radice” of the 2013 conclave. However, this adhaesio can only heal the imperfections of a legitimate conclave, but not an illegitimate conclave in itself, since Benedict had not legitimately abdicated.

The Conclave was Illegitimate: tThe cardinals gathered for this illegitimate conclave did not realize that Benedict had entered the “forbidden see” because this cannot be explicitly declared: it simply exists, in fact.

St. Robert Bellarmine considered it only hypothetically possible that a legitimate pope could fall into heresy. Even if that were the case, he would ipso facto lose the papal office. Bergoglio has already abandoned sound Catholic doctrine on several occasions, which only confirms that he lacks the assistance of the Holy Spirit in matters of doctrine that is promised to the Petrine office. The Catechism of the Catholic Church says, in fact, at number 892 that divine assistance is given to the Bishop of Rome, pastor of the whole Church, even when he exercises the ordinary magisterium, that is, not only when he speaks “ex cathedra”.

I know this step is serious and has consequences. But I do so in the confidence that the Lord will help and assist me and that soon other cardinals, bishops and priests will courageously ask for an investigation into Benedict’s resignation and raise their voices to avoid further damage to the Church and pave the way for his true renovation.

I remain with the request that my decision not be reacted simply with sanctions, but that the reasons I have set out be confirmed or refuted in an intellectually honest way.

God’s blessings for his difficult ministry as a shepherd,