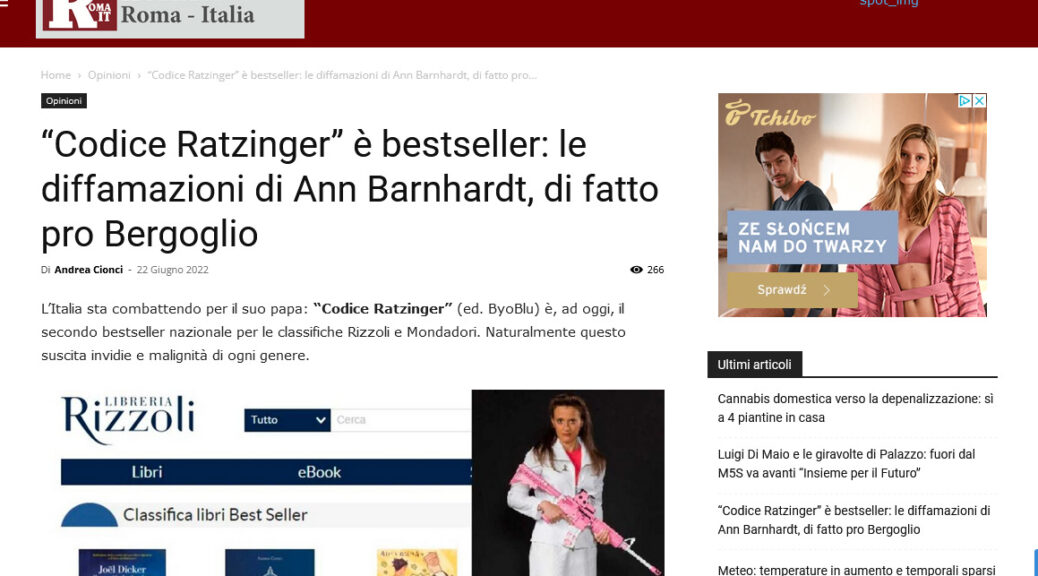 Italy is at war for the Pope: with The “Codice Ratzinger” (Byoblu editions) now at 2nd place for best seller according to Rizzoli & Mondadori’s rating services. And naturally this is inciting envy and bad graces of every kind.

The Enemies of Benedict XVI

Moreover, in the circle of enemies of Pope Benedict, the reward for the lowest, crudest and most offensive kind of insinuation belongs by right to the rather well-known American bloggeress by the name of Ann Barnhardt, who for years has sustained that Pope Ratzinger did not understand his own job and made a mistake in his Declaration of 2013, because he wanted to create two popes, one active and one contemplative.  This is the theory of substantial error, of which we have written a short time ago.

In recent weeks, to Barnhardt there were sent three friendly private emails, three articles, an interview hastily-translated into English, to explain the controversy over the impeded see.

We sought to make her understand by every method, and with the greatest gentleness, the controversy over the Plan B, that is, that the Declaratio which she is obstinate to consider as an invalid renunciation of the papacy, was in reality a perfect and sincere announcement by which Pope Benedict XVI retreated into an impeded see, to put his enemies among the Cardinals to the test and to remain pope, even if, in a state of imprisonment.  “With highlighters”, we tried to illustrate the question of the Ratzinger Code, or rather, of the logical and amphibologic language, imitating the style of Jesus Christ with which the Holy Father is communicating his own canonical situation to the world, by inviting her to share all her doubts in a peaceful and friendly exchange.

Ann Barnhardt lack of any response

Nothing came in reply. Ann Barnhardt never responded, never accepted the smallest cordial and mature exchange unlike Mark Docherty and Dr. Edmund Mazza, the other two supporters of the theory of substantial error.  Strange, indeed, because this blogger loves to show herself armed with a pink rifle, a thing which should indicate a certain openness to a fair “fight.”  Instead, we were left to record only the retreat of a bunny-rabbit.  Thus, the self-selective effectiveness required to comprehend the Ratzinger Code has newly pigen-holded Ann Barnhardt: a flunky on the exam, found to be unqualified by reason of her lack of comprehension and “obstinate doubt”.

At first, she did indeed deride me, by describing an absurd Pope Benedict who “plays chess underwater in 15 diverse dimensions”, then she accused me directly for promoting “Gnosticism” by means of the Ratzinger Code.  A tragic-comical score in her own goal: because through “Gnosticism” one understands a mystical knowledge, obscure and intended for a few elect.  In such a manner, Barnhardt has shown the world that she thinks that the patent logical messages of which even a child is capable of comprehending (such as, “there is only one pope” without saying which one) are for her something terribly difficult and obscure to understand, as some sort of alchemical jargon.

But the final pearl that she left me in her recent article, where she writes: “Let us disabuse ourselves of ANY notion of any categorical nonsense like a “Ratzinger Code”. Anyone pushing such a fiction – and FICTION truly is the word – is a profiteer, looking to make money off of this abject train wreck of a situation.” “Pope Benedict has committed the greatest error in the history of the papacy.” (Trans.: Translated from Cionci’s Italian — could not find original on Barnhardt.biz)

Heavy words, which are not surprising for the “intemperate Ann”, who easily insulted Msgr. Ganswein, as if to make him appear to be insane, for having become very emotional in his recent discourse in which he spoke of the passing of Pope Benedict.  Everyone understood why, except Barnhardt.  Firm in her B. A. in Animal Husbandry, Ann Barnhardt had previously called the Holy Father, Benedict, “the worst pope in history”, and Br. Alexis Bugnolo, one of her principle admirers, “a larcenist”.

Such a heavy judgement, as “grifter” then, might — at the most — be expressed solely after a point by point refuation of my investigation, but Barnhardt did not know how to reply to any part of it, given that she never accepted the least sort of exchange.

More than 200 Articles on the Ratzinger Code

“Do not let right hand partake in what the left hand does”, says the Gospel (In the Italian version), but the defamatory accusations of the bloggeress require me to clarify a few things, even at the cost of putting private matters on display in public.  The undersigned, wrote, without pay, more than 200 articles on the web regarding the investigation of the Ratzinger code: my blog at the Libero Quotidiano, by definition, is not remunerated by the newspaper, and by personal insistence of the same, so were the articles at ByoBlu and at Roma.IT produced voluntarily so that I might have the greatest liberty of expression and not to make a profit on a sacred and epochal question. Likewise, for all the interviews I gave on YouTube.

Moreover, the same accepted in accord with the standard editorial contract with ByoBlu, the smallest percentage of royalty allowed by Italian law to keep the price of the book at the lowest possible, within the limits of the cost of printing.  In sum, the investigation, “Pope and Antipope”, which had the bare bones about this greater Question, was published in 60 chapters by ByoBlu and is distributed free to everyone, so that even someone without four coins in his pocket might be able to have access to the findings thereof.

Hence, the “commercial profiteering” amounted to a loss of 10 thousand euro value of my own work invested “freely and for the love of God”, concerning which I do not expect ever to be reimbursed.  Not to speak of the risks to my person, career and good name.

Poor Miss Barnhardt has consigned herself, in suchwise, to the dustbins of history, as one of those who castigated the Vicar of Christ, in the style of a volunteer “friendly opposition” of the Pope.  I would not want to be in her shoes when this matter is concluded with the epilogue of the promised Banquet, of which one of my readers has spoken about.

Another antipope is on his way

Moreover, there is even a greater responsibility to be considered: that of remaining obstinately in the inability to comprehend what the Pope has put into motion, and of contributing thereby to guarantee another antipope, with the most likely name, as Bergoglio has presaged, of John XXIV (the name of the successor of the antipope Baldassarre Cossa, as well as that of Pope Roncalli).

Indeed, nearly two-thirds of conservative Catholics have been taken hostage by the theory of substantial error, of which Barnhardt is the intransigent proponent, according to which Pope Benedict is a modernist, is a close accomplice of Bergoglio, erred, is an ignoramus, inept etc..

According to you my readers: do you think anyone might ever enter the field of battle to defend such a pope in an impeded see? No. Never.  Against him, they nurture only a rage and disdain, without wanting to understand anything.

And thus, behold, what will happen thanks to this theory of substantial error which prevents any comprehension of the situation of Pope Benedict XVI in an impeded see.

There is in process a very dangerous project of making Bergoglio legitimate among the very circles of the conservatives and traditionalists.  There are shining examples of this in the recent statements made by Cardinal Gerhardt Mueller and the Bishop Athanasius Schneider.

Together with these intellectuals who support this project, who, as usually, have furnished not the least response to the lengthy letters I have sent, they will lead themselves at the end of the Antipapal Act of Francis, into the spurious conclave, comprising nearly 90 non-Cardinals named by Bergoglio.  In such a manner, there will be the enormous possibility of a terrifyingly ultra-modernist (such as Zuppi, Tagle, or Mariadiaga) to give the final death blow to Catholicism.   But, even in the highly unlikely scenario of the election of a traditionalist, there would still be an antipope, deprived of the Petrine munus (which remains with Pope Benedict) and hence deprived also of the guarantees of infallibility and of divine assistance which belong to the legitimate Pontiff alone.  Besides ratifying the end of the visible canonical Church, from the spiritual point of view, this might lead us to suffer by “Divine permission” the punishments of pandemic, war and famine etc..

From the point of view of a layman, this will guarantee the undisturbed advance of the dynamics of the deep-state Globalists with their Sanitary Dictatorship, the digitalization of the population, demographic reduction, gender ideology, the loss of nation state identities and other atrocious eugenic politics.  Understand now?  With another antipope, “one returns to the rack”: and begins again the same game.

And for this reason, we ought to give thanks to all those who those who are affectionate most for their own egos, to their own theories, and not to objective truth, or at least, to the peaceful to a rational exchange face to face.