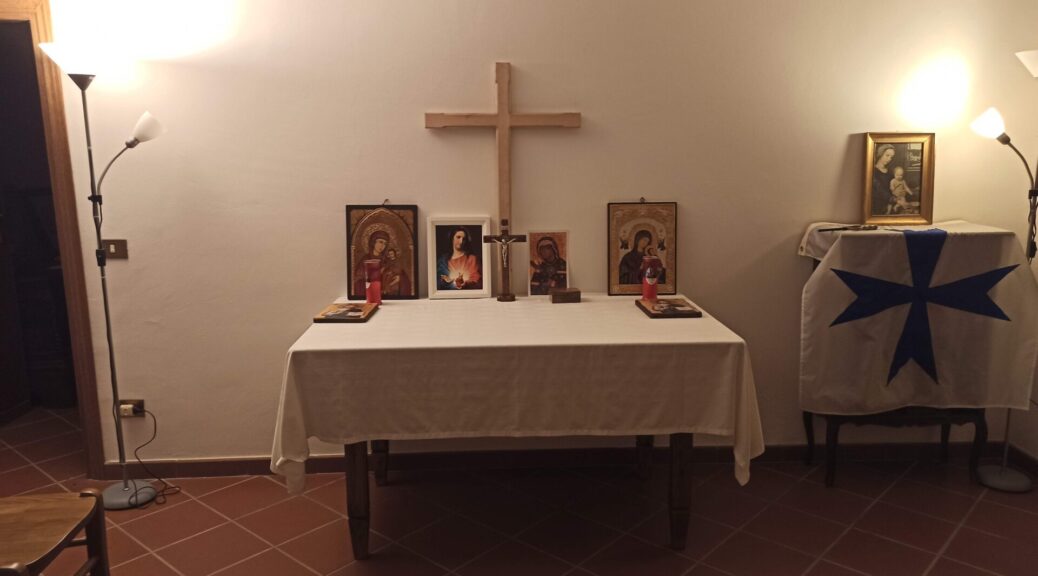 A year ago, I determined not to allow another month go by without doing what I could to enable the few Catholic left at Rome, in communion with Pope Benedict XVI, obtain the Sacraments. And the Lord Jesus  blessed me with the support to do this holy work.

Thus, I found a villa for rent and rented it, and I made appeals here to help pay for the expenses. Without bank account, references, work history, job, or paycheck, I miraculously found a place worthy for the Holy Sacrifice of the Mass, so that Catholics could worship the Most Holy Trinity at Masses where Benedict XVI the true Vicar of Christ, was named in the Canon.

Since that time, I have spent $24,000 USD approximately, and have received donations for this work of about $6000.

But I am no longer able to go forward on this apostolate, because I cannot even pay my personal expenses in July, on the basis of what I receive from all my benefactors round the world. (I was saved in June by one benefactor who made an extraordinary donation, which I counseled him against, but who did so on his own insistence.)

But this apostolate, as crucial as it is now, on account of the more advanced age of the Holy Father, and the imminent expected resignation of Bergoglio, which will spark not diminish a greater crisis in the Church, will have to come to and end as of Sept. 30, 2022, because I cannot afford it unless, I get new support.

Part of the reason I cannot, is that many benefactors, disagreeing with me on the issue of defending Christians in the Ukraine, have stopped supporting all my apostolates even those outside of Ukraine. Another, undoubtedly is the declared conspiracy of Ann Elizabeth Barnhardt and associates to calumniate me as a larcenist round the world. She explicitly said that her goad is to “neutralize” the evil effect of my apostolic works in the Church.

So You can see who is really in communion with Pope Benedict XVI by who opened a mass center for Catholics, and whose efforts are partly contributing to its closing down.

I can only continue this apostolate – which has no benefit to me personally, since I am outside of Italy since March 2022 — if I get pledges for the expenses which run $1600-1900 USD a month, depending on the exchange rates of the US Dollar vis-a-vis the Euro.

So here is a monthly pledge button, and if you want to help me maintain the ONLY mass center in the Province of Rome in communion with the Holy Father, pray about it and make a pledge. Even a lot of little pledges can make it happen…

Failing such pledges, I will have to spend 2 weeks in August, with all the expenses that includes, traveling back and forth to Italy, to ship out my personal effects and put on auction the $12,000 USD value in things of the Chapel and the furnishings I provided to make the place suitable to welcome so many faithful. I only expect to get 10-30% of their original cost.

I do not want to do this. But I don’t have a penny to my name… and have to face the reality of what has happened to my now trashed good name.

If the pledges are not sufficient they will be canceled and all funds returned.

CREDITS: As soon as I moved into the villa I set up a chapel. Subsequently I purchased many liturgical necessities. This photo shows the first days, before I did purchase anything, but for security reasons of the faithful, I never took photographs of the place.

9 thoughts on “Only pro B16 Mass center at Rome to close in September?”