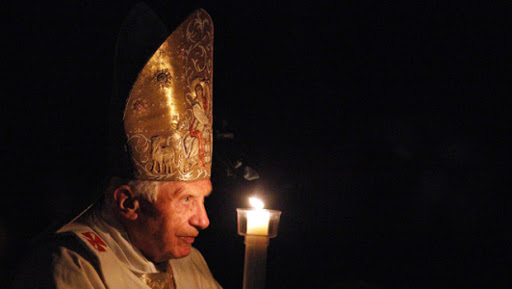 Many have written the Holy Father, Pope Benedict XVI. And some of them have been those who have publicly sustain, proven, argued, etc., that he is still the one and only Roman Pontiff, Vicar of Christ.

A few of these have received responses, which are significant.

And from these, we can see that the Holy Father’s actions are not meaningless, but meaningful.

From, this I think we must also conclude that his silence is not without meaning.

He has lived in the Vatican for nine years, so its about time to list the manners in which he has been silent, so see how meaningful they are:

1. He has never called Bergoglio the only true legitimate pope.

2. He has never publicly rebuked those who say he himself is the one and only true pope.

3. He has never publicly agreed with those who believe what he did in February of 2013 represents a betrayal of them or of the Church.

4. He has never complained about dressing in Papal white.

5. He has never publicly affirmed that he wants to stay in the Vatican.

6. He has never publicly affirmed that he misses the visits of the Cardinals.

7. He has not responded to significant requests for clarification.

Among the silences that personally are most significant to me, is this, that when I sent him my 20 page Scholastic demonstration (PDF version of what I sent to the Holy Father) that his Declaratio as written could not be reckoned as a valid abdication on account of what would be a substantial error in naming the petrine munus incorrectly, the Holy Father never responded to me in more than 90 days (Proof of delivery, Report of non response). Not even as of today. Not even through Archbishop Ganswein his personal secretary or through the Secretary of State, even though I sent it by registered courier (FedEx).

At the time, I assumed that he agreed with everything I wrote, as the ancient Latin legal maxim states, qui taceat, consentit: that is, “He who remains silent, consents”.

And know I think we can see that my assumption was not an exaggeration. Published on Academia.edu, and distributed to every member of the clergy, priests, bishops of the Church of Rome (PDF version in Italian), I was not refuted or rebuked by anyone (Report on this).

So if anyone outside of Rome says that Pope Benedict XVI is no longer the pope, or did validly abdicate, there is a lot of silence, beginning with Pope Benedict XVI which argues against their position. The Vatican’s silence is also significant (Report on this)

Those all in the know are quiet.  And that speaks volumes.

I published my scholastic question here, and here, and here in Spanish, and reported my correspondence with the Holy Father (see links above). — And I think my tract may have also been translated into French and other languages (Commentors, please report below!).

And I am glad and vindicated, too, like the others who wrote the Holy Father, by the response I received.

5 thoughts on “The Silence of Pope Benedict XVI”