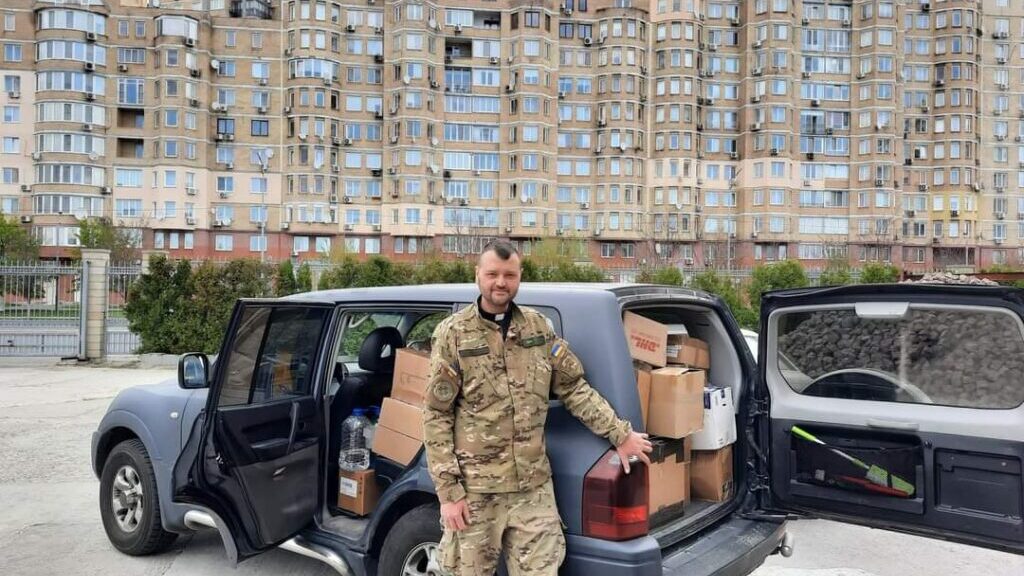 English Translation of the Above

Father Vitaly Voietsa: “Our oath is a sign of faith, God’s presence and a constant reminder for everyone that we promised to be near God’s throne”

Ukraine has more than once impressed the world with its spiritual power. In the most difficult moments, the strength of the spirit supports our defenders. They feel how many people believe in them. Faith in all its manifestations strengthens and inspires us. The military medical chaplain of the Ukrainian Greek-Catholic Church, Archpriest Vitaly Voetsa, like all military and military medical chaplains, adheres to the oath to be faithful to the Church and the Ukrainian people. His ministry is on the front lines, on the front, in hospitals, among all those who need support and the Word of God.

— What is the essence of the oath and chaplain service?

– When we are ordained as priests, we take an oath, just like the military. Our oath is a sign of faith, God’s presence, and a constant reminder to everyone that we have promised at God’s throne. When we swear allegiance to the Church and the Ukrainian people, it is not a formality or a relic of the past. We solemnly swear to be faithful, and this helps us in crisis situations, such as now, not to retreat, to hold on to the end. I am often asked what has helped and supported me in difficult moments. It was this that “gave wings” and prompted us to take actions that we all did!

His Beatitude Patriarch Lubomyr Huzar outlined the rule for chaplains: “To be close.” When we are close, words are superfluous. You can look into the eyes, feel a person’s breath, mood, and at that moment already know how to help and support. Being around is an action. The task of a chaplain is to be close to a person who needs it, to feel how to help him. His Beatitude Svyatoslav Shevchuk, Father and Head of the Ukrainian Greek Catholic Church, defined another task for chaplains: “to be where there is the greatest need.” It is subtle to feel where you can serve.

— Now chaplains have joined the volunteer movement, in addition to helping hospitals and traditional work in military units?

– It should be understood that in this situation, the chaplain’s activity is a team effort, someone found food, hygiene products, medicines, someone got a gas tank, a car. And after that, the chaplain can work logistically. When we were prepared for chaplain service, it was usually theory and elementary practice, particularly in peacetime. Yes, we served in military units, hospitals, but the year 2014 became a real challenge for each of us… I remember the first trips to the east of Ukraine, joint prayers, the first wounded in hospitals, then our service was a movement of the heart, a new experience that and today has its own content and development. We worked as equals with the doctors who treated the body, and the chaplains who treated the wounded souls. And not only the wounded, but also the medics themselves, who sometimes need more support due to constant emotional exhaustion. They need communication, smiles, consolation. Sometimes a banal sign of attention, an apple that you brought from the bottom of your heart, or a small icon, or even a candy, creates spiritual support.

— Now you go to the front-line zone, to the liberated territories, do you manage to help many?

– A lot has been achieved, it is a whole network of chaplains, in particular of our Church, in all corners of Ukraine, who go to military units, work to get the necessary thing: for example, generators, food, clothes, medicines or ambulances for our military. This is a big team effort: finding, issuing documents, developing logistics, solving fuel problems. We strive to be close in different ways. The territory in which I was involved as a military chaplain was: from Novohrad-Volynskyi to Zadniprovye, these are military units, stationary and field, and military hospitals, in particular field hospitals. Now there are other challenges and other geographical positions, but the work continues and at an even greater pace. We not only bring something at our discretion, say, food, hygiene products, blankets, sleeping bags, but at the same time it is a monitoring of needs, and such trips are not one-time. We spread the word about the needs among the chaplains and volunteers and carry the essentials. Once we arrived at the position, among other things, we brought a lot of wet wipes, and the soldiers joked that we had brought them a “shower”. It would seem that in peacetime such a trifle, but for them, during the war, it is of great value.

— Obviously, humanitarian cargo is not the main thing in these trips?

— It is important for the soldiers that the priest came to them. The guys were happy about this, for many it is not so important what we brought, the main thing is that we came ourselves. They wanted to see their chaplain, because often there is no priest in the unit or in the positions who would come with a prayer and a good word. They are waiting for us, even just to chat, to receive a blessing, some went straight to confession, some asked that a prayer be made for them, then we prayed the Service of God or other prayers.

— Did the Easter greeting trips have a special meaning for both the soldiers and you?

— Yes, the Easter visits were a great joy, because the guys on the front lines still wanted a real Easter, not a loaf of bread with raisins, but to experience the Resurrection of Christ through the words of the chaplain. Thanks to the Department of Military Chaplaincy of the Ukrainian Greek Catholic Church, which takes care of such moments, a greeting was organized on Maundy Thursday. His Beatitude Svyatoslav Shevchuk consecrated more than six thousand pasaks and meat products, and with his blessing we delivered them all over Ukraine. And I saw people I knew in peacetime – emaciated, sleepless, with tired eyes, but they all have a common feature – their eyes are burning, burning with the desire for victory. I never heard them whine or complain about the government, political circumstances. We all have a common enemy, who has declared himself the enemy of us all.