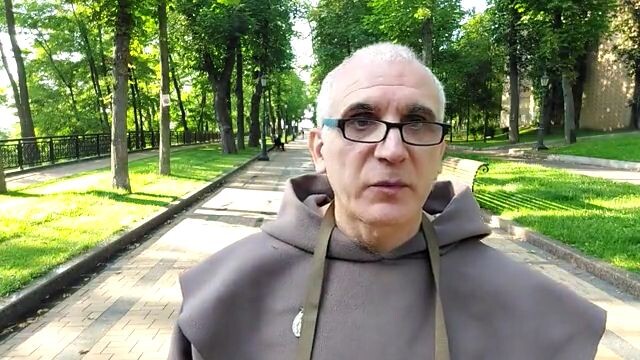 Editor’s Note: This is my July, 2022, report on the Russo-Ukrainian War, where I tell you everything the MSM is not telling you and explain how this war fits in with the Globalist Agenda of the Great Reset. Just facts. No speculations.

Below, I post my English translation of Sr. Elena Aiello’s prophecy concerning World War III which foretells with great accuracy what we, as I speculate, are about to see and experience.

These are my not reasons why I will not continue to fight, but what I need to fight. But these are also also my counsel for those of you who cannot or will not, what to expect in the next 3 years.

For those who wish to assist me in defending Europe and Christendom, here are two links:

Since Feb. 26, 2022 our Order has pledged it support to the victims of war in Ukraine. Join us in helping them through our Humanitarian Fund https://t.co/uUMH9Tihba 0% overhead, the only one of its kind pic.twitter.com/pXe56umckR

Since Feb. 26, 2022 A. D. our Order has supported #Ukraine and the victims of war. We now have a number of projects, which you can assist us in. We urge our Members and Friends to mobilize to defend the #Christians of #Ukraine https://t.co/0gJ6wy5RBp

There are already 37 300 good russians. pic.twitter.com/HB1E6HCxHW

Note: the numbers in the graphic above, in yellow, are Russian Losses yesterday. Those in white are losses since the beginning of the conflict, some 137 days ago.

Very clear predictions about future times are attributed to Sister Elena Aiello, famous for having unsuccessfully forewarned Benito Mussolini of all the disasters that would have occurred in Italy if he entered the war alongside Hitler.

COSENZA – Sister Elena Aiello (now blessed) was a Catholic mystic who had many visions and revelations from the Lord and Our Lady. She also had the stigmata like Padre Pio, her contemporary. She was born in Montalto Uffugo in the province of Cosenza, on April 10, 1895, on a Wednesday of Holy Week. She founded the new religious institute of the Minim Sisters of the Passion and opened various hospices for old poor people and orphans. Mother Elena was frequently esteemed and consulted by Pope Pius XII, who recognized her gifts of self-denial, charity and prophecy. In January 1991, Mother Elena Aiello was declared venerable by the Church and 20 years later she was beatified.

The Mother of Jesus Christ, speaks:

“Unholy propaganda has spread many errors throughout the world, causing persecution, ruin and death everywhere. If men do not cease to offend my Son, the time will not be far off that the justice of the Father will send the due scourge on earth, and it will be the worst punishment that has ever been seen in the history of humanity. When an extraordinary sign appears in the sky, let men know that the world’s punishment will soon be!” (January 7, 1950)

“I want it to be known that the scourge is near: fire never seen before will descend on the whole earth and much of humanity will be destroyed. Those hours will be desperate for the wicked; with screams and satanic blasphemies they will invoke to be covered by the mountains and will try to take refuge in caves, but it will be in vain … Those who remain will find God’s mercy in my protection, while all those who do not want to repent of their sins will perish in a sea of fire… ” — “ Blessed are those who in those moments can be called true devotees of Mary ”.

Russia will be almost completely burned. Other nations will also disappear. Italy will be saved in part for the Pope. “(April 11, 1952)

“The world has plunged into overwhelming corruption … Those who rule have become true incarnate demons, and while they speak of peace, they prepare the most deadly weapons … to destroy peoples and nations.” (April 16, 1954)

“God’s wrath is near and the world will be tormented by great calamities, bloody revolutions, strong earthquakes, famines, epidemics and terrifying hurricanes, which will cause rivers and seas to overflow! The world will be shocked by a new terrible war! The deadliest weapons will destroy peoples and nations. The dictators of the earth, true infernal monsters, will land the Churches with the Sacred Cibori and destroy peoples and nations and the dearest things. In this sacrilegious struggle, due to the ferocious impulse and the relentless resistance, much of everything that has been done by the hand of man will be demolished. Clouds with flashes of fire will finally appear in the sky and a storm of fire will strike the whole world. The terrible scourge, never seen in the history of humanity, will last seventy hours. The wicked will be pulverized and many will be lost in the obstinacy of their sin. Then you will see the power of light over the power of darkness. “ (April 16, 1955)

“There will be a true and great duel between me and Satan … Materialism advances fast in all nations and continues its march marked by blood and death! … If men do not return to God, a great war from east to west, war of terror and death, and finally the purifying fire will fall from the sky like snowflakes on all peoples and a large part of humanity will be destroyed. Russia will march on all the nations of Europe, particularly Italy and will raise its flag on the dome of St. Peter’s … The world has become like a flooded valley full of debris and mud! It will still be at the mercy of the harshest trials of divine justice, before the infernal flame blazes on all of humanity … Great calamities will come into the world, which will bring confusion, tears and pain for all. Strong earthquakes will engulf cities and towns. Epidemics and famines will bring terrible destruction, especially where the children of darkness are. Never as in these tragic hours the world needs prayers and penances, because the Pope, the Church and the priests are in danger, and if we don’t pray, Russia will march on Europe and particularly on Italy, with many ruins and massacres. … Those who rule do not understand this because they do not have the true Christian spirit and they are also blind in spirit, because they do not see the truth. Even in Italy they are like rapacious wolves dressed in lambskin, because while they call themselves Christians they open the doors to materialism, spreading the dishonesty of morals, and will bring Italy to ruin; but many of them will go into confusion … I will manifest my predilection for Italy, which will be preserved from the fire; but the sky will be covered with dense darkness and the earth will be shaken by terrifying earthquakes that will open deep abysses, and cities and provinces will be destroyed; and everyone will cry that it is the end of the world! Rome too will be punished according to justice for her many and serious sins, because the scandal has reached its climax. But the good, who suffer and the persecuted for justice and righteous souls need not fear, because they will be separated from the wicked and obstinate sinners, and will be saved! “

“Humanity has distanced itself from God and, hallucinated by earthly goods, has forgotten the sky and plunged into an overwhelming corruption, which is not even matched by the times of the flood! … But the hour of God’s justice is near and it will be terrible! Tremendous scourges overhang the world and different nations will be hit by epidemics, famines, strong earthquakes, terrifying hurricanes and death! … And if men do not recognize in these scourges the calls of Divine Mercy and return to God with a truly Christian life, a another terrible war will come from East to West, and Russia with its secret weapons will fight America, overwhelm Europe and especially see Germany’s Rhine River full of corpses and blood. Italy will also be troubled by a great revolution and the Pope will have to suffer a lot. The enemy, like a roaring lion, will advance on Rome and her gall will poison peoples and nations ”.

18 thoughts on “Br. Bugnolo: How the Russo-Ukrainian War will become World War III”