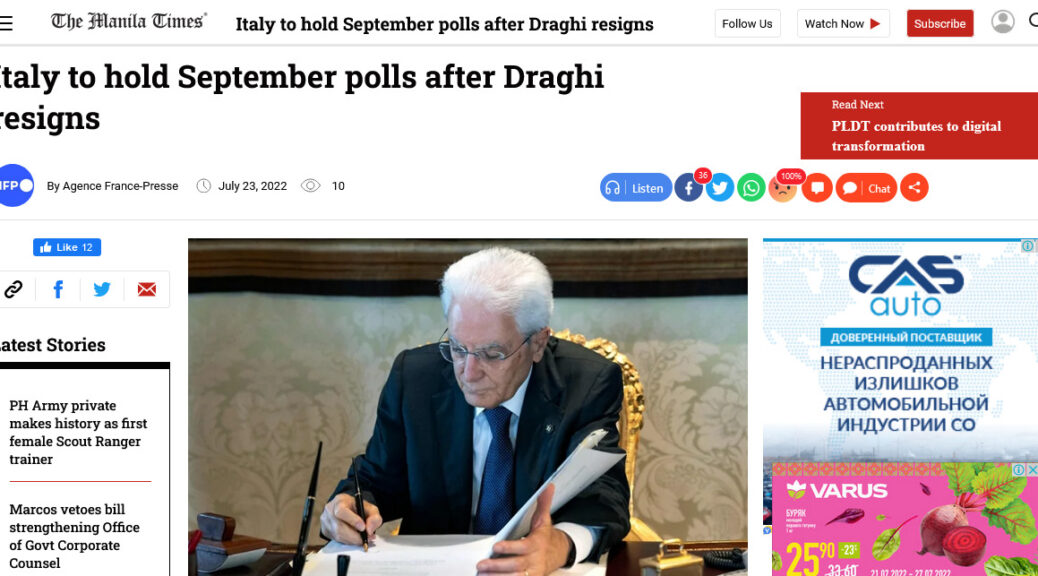 Italy will hold parliamentary elections this fall, for the first time in the Fall, in a century, after the no-confidence vote in the government of Mario Draghi, ex-Vice President of Goldman Sachs (Rothschild) resulted in a complete no-compromise for the formation of any new government.

The call for snap elections has been something I have expected since May of last year, since the ruling parties, who were 100% in agreement in principal on the Scamdemic and DeathVaxx know that if they allowed normal elections, as were due next year there would be a small chance that the opposition to the Globalist agenda in Italy would be able to form a part and field candidates.

But that is impossible with snap elections.

So this move is to really maintain power and keep the script going with a different theatre group.

Snap elections under the current rules make the formation and victory of new parties impossible for a variety of reasons.

First of all, as soon as the Scamdemic was to be launched, the Italian Parliament outlawed all funding except from registered voters. Previously, funding could be received from any citizen and indeed from companies and persons outside of Italy. All the ruling parties were financed this way.

Second, to run candidates for parliament, you have to meet a much more stringent requirement, of collecting 70000 notarized and confirmed signatures in a majority of the Italian 21 regions and autonomous provinces. And by notarized, I mean to say, that each and every citizen who has a voting card already prepared — and since the Scamdemic they do not prepare them timely any more — must go before a notary public or a court official, in a public place or in his private office and sign the subscription form for the political candidate or slate. The forms needs to be prepared, and any of the smallest error can invalidate them.

Only parties which are registered as parties can participate. And they must have a symbol which is approved by the local procurator. Of course, any symbol which would attract voters against the Globalist regime is not permitted.

Then after collecting signatures, the signatures have to be validated. During this process most signatures are excluded for any reason necessary to reduce the number below the legal threshold.

This means that Italy will never again have a populist party and that voters will only be able to vote for candidates which the Globalists approve. This is why Reuters (Rotchschild) promptly ran a story affirming that the next government will keep the foreign policy goals of the previous Rotchschild government.

I won’t even mention that 90% of the groups which opposed the Scamdemic, at least in words, are engaged in vilifying those groups which are not controlled by Globalists. But that is another story.

Such is the sad fate of a nation which accepted Masons as its liberators and which has no will to overthrow them.