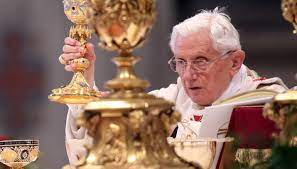 The amount of non-intellectual work being done by those who insist Bergoglio is the pope no matter what, even if that be the only dogma left in the Catholic Church, has arrived at it most silly and absurd assertion.

I call it the “Liturgical Theory”.  According to this theory, a man is pope if he offers the holy Sacrifice of the Mass without saying, “And for our Holy Father, N.”, naming some one else.

It is alleged, as an example, the case of Don Sione Pifizzi of Florence Italy, who in the presence of Cardinal Ernst Simoni, in the private chapel of Pope Benedict XVI, in the Mater Ecclesiae Monastery — where he is watched and held in de facto isolation from all media and all the faithful, except those hand selected by Bergoglio, that the Holy Father at Mass offers it, “And for our Holy Father, Pope Francis”.

Therefore, according to this theory, that means he is not the pope.

But there is a problem with this theory.

First, it is not a theory, because the hypothesis has never been proven. Because there is no law in the Church or teaching, which asserts that a man is not the pope if he says these words, or ceases to be pope if he does, or has duly (rite) manifested his renunciation of the papacy if he says such words at any later date.

The other problem is one of interpretation.

What do these words mean when you are being held prisoner by Bergoglio and the entire Curia and Episcopacy are involved in a diabolic “threaten to kill you if you don’t renounce” conspiracy of many if not all of the Sacred Hierarchy and clergy.

I will never forget the wild rejoicing from all the Modernists and impure clergy round the world, on Feb. 11, 2013. I was at Rome and I saw that from that day onward the Pontifical Faculties began to throw off any pretense of the Faith.  They were gleeful. They knew what happened and they lied to us each day to distract us from the truth of it or prevent us from every knowing it.

So if you presume that such an event happened because Bergoglio’s hand picked clerics say so, and if you insist it means that he is no longer the pope, you have no proof, but only an absurd allegation, backed by no law and forensically compromised by the circumstances in which it is alleged to take place.

And if you think that means Bergoglio is the pope,  then I would humbly submit that you do not give a damn about the truth or a bleep about who is really Christ’s Vicar on Earth, not to mention, that you fear not even to imply that Christ is a impardonable liar, in saying to Peter and all his successors: “Simon, Simon: Satan has desired to sift you all like wheat, but I have prayed for you, that your faith may never fail…”