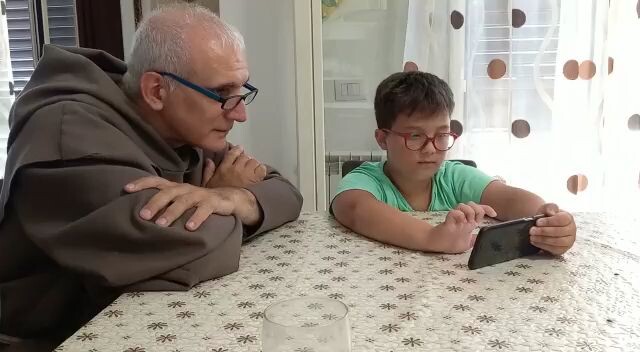 One of the most important apostlates which the corruption of Vatican II destroyed was the vidits to families to give good cousel to parents, grandparents and youth.  Since my own mom dedicated her life to children I cannot help but be concerned in their dalvation, proper formation and protection.

Lately, I have been traveling, and in recent days I paid a visit to my best benefactors in Sicily, at whose table I alwaysvfound hospitalityvwhen I attended the Latin Mass at Acireale on Sundays during the years I lived in Sicily as a hermit, 2009-2011 A. D..

When visiting families clergy and religious should avoid all useless chatter and should attend to advising the parents in regard to what is seen out of place during the visit. Parents should bring questions to the visiting clergy and religious about family problems and questions about the Faith.  Short instruction on the basics of the Faith, just as the Our Father, Hail Mary, Glory Be, the Creed should be the aim of the talks.

During my visit, I left the grandsons of my best benefactor in all of Sicily with  an instruction on the importance of living in the real world, and putting little importance in television and cellphones. At my suggestion the grandfather took them to the beach, where I taught them to walk on a rocky beach and explained what a break water is.  Acireale is also the home of the mythical Polyphemus, and so I explained who he was, why Greeks believed in myths, and why pagans exhorted to strange and adventurous stories to understand the world around them. I suggested the parents that they get children’s version of the Odysee and stop buying Marvel or Anime comics, since the latter were created and published by pedophiles and perverts.

One of the grandchildren showed me a bible instruction program on a cellphone, and I pointed out to the parents that it was a protestant version of scripture, which mistranslated, “And She shall crush your head” as “And a son of a woman shall crush your head”. The parents showed me a comic book which read backwards, in the style of Hebrew, Arabic and Oriental languages, and the mother explained how this was causing her son to have difficulty writing Italian in the left to right direction. I advised that the book be shelved and kept away from young children. I also advised getting the lives of the Saints in illustrated children’s versions, rather than godless Christ-less comics.

I gave each boy a pendant of his guardian angel and taught them what a Rosary is and why it is important to write out your prayers and learn them by memory.

I suggested to the parents and grand parents that at their age it is important to take them to different places and teach them about the real world. And after 2 years of lock down they were eager for it.

As I left, the boys asked me when I was going to return. As God wills…

For my readers, an Update

Many have asked why I am publishing so rarely know. Well, I announced in June and July that I am shifting to an apostolate of works rather than of words, so I won’t be writing as much here.

Also, I have been traveling, from Ukraine to Italy and tomorrow to Spain.

I finished all I can do in founding the Ukrainian non-profit, Cross Azure, which is now run by American Military Veterans. They are distributing IV Fluid and related paraphernalia, which is saving hundreds of lives on the Front.  Ukraine does not have a blood supply and so civilians and soldiers who are wounded often risk dying from loss of blood pressure. I have left the day to day running of the corporation to them, and have returned to Italy.

In Spain I will be giving conferences on Pope Benedict XVI, as making pilgrimages to some of the major shrines. I will try to write an article about each and publish the Spanish version of my talks.

If you would like Cross Azure to save lives of innocent Ukrainians on the Russian Front, please consider a generous donation. In the Ukraine, IV Fluid costs under $2 USD per 400 ML, which means a donation of $5 can save one life. What better use of money is there? Click this image to visit their site and make a donation, or follow them on twitter at @CrossAzureUkr.

PHOTO CREDITS: All but the first video, are videos shot by Nuccio Rizzo, showing me and two of his grandsons, at times walking along the tiny harbour of Santa Maria la Scala, at Acireale, Sicily, in August of 2022 A. D.. Used with permission. Nuccio is the inventor of the original Calzacalze, the device to help you put on your socks.

12 thoughts on “In Sicily, for a Family Catechesis”

Leave a Reply to Fr a Cancel reply