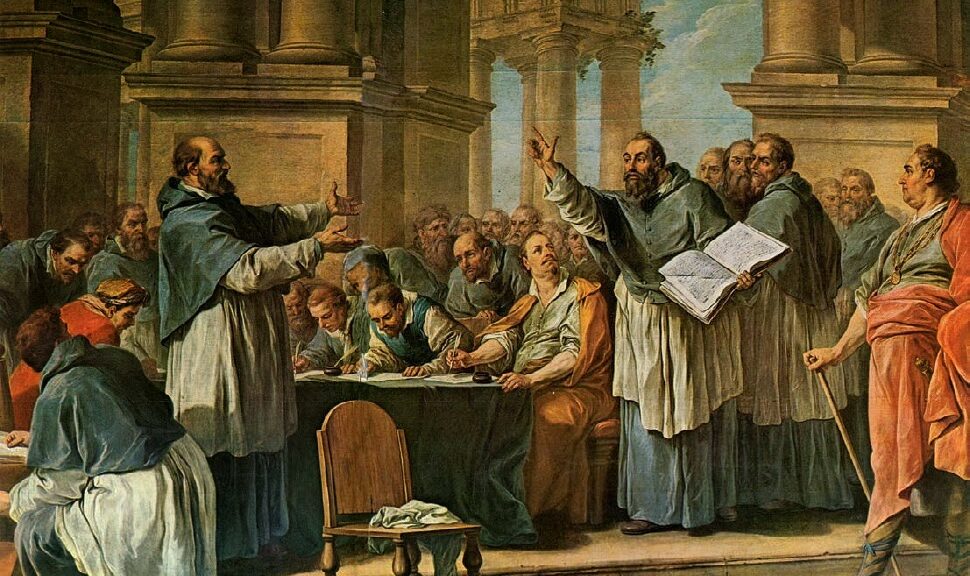 The other day, Marco Tosatti launched on his blog, an anonymous essay, about the Donatist writer Tyconius‘ idea of a final great separation of the true Church from the false Church. And since I am seeing many refer to it across the net, I believe it is necessary to warn against how great an error it contains.

Tyconius was a Donatist. Donatists believed that there were some sins so great that EVEN WHEN REPENTED OF they put you out of the Church. It was a very convenient theory for that group of Catholics in North Africa, who having faithfully endured and resisted the final persecutions of Diocletian, considered themselves therefore not only superior but entitled to govern the Church thereafter.

In the Apocalypse of the Apostle John, we read about the beast with 10 horns, the last of which has one horn removed and three sprout up in its stead. Some writers interpret these horns as the 10 major persecutions of the Catholic Church in the Roman Empire, which culminated with the persecutions of Diocletian, which was a threefold persecution: confiscating the Scriptures, rounding up the clergy, and demanding all Catholic to burn incense on an altar of Mars, the refusal to comply with which was in each case to be punished by local authorities with death.

In many parts of the Roman Imperium the local authorities were reluctant to persecute Christians in such a vicious manner. They allowed Catholics to purchase a document, a libellum, which stated they had burned incense or otherwise cooperated with the decrees of Diocletian. For many lax-conscienced Catholics this was the easy way out. Others burned the incense, handed over priests to death, and surrendered copies of the books of Scripture and liturgical texts.

After Constantine decreed that Catholics had the liberty to worship the Triune God, Catholics returned to practice their faith, and indeed, were now allowed to do so in the open light of the day.

Throughout the Church, the Bishops called for the repentance of those who had failed to resist the terms of the persecution and chose treachery, idolatry or apostasy as a way out.  Long penance where required. In some places a life time of waiting at the door of the Church, with re-admittance to communion only at death.

A great controversy about the Sacrament of Penance broke out in the Church, with some espousing the idea, which was common, that this Sacrament can only be received once in a lifetime sincerely, others that it could be received more often.

But in North Africa the situation was even more grave, since many bishops had denied the faith, obtained libella, handed over the scriptures and betrayed their priests, or burned incense to Mars (the Roman God, not the planet).

When these repented and received the Sacrament of Penance, they were admitted back to communion in many Churches, even back to their offices.

The idea of a ex-apostate, ex-traitor, ex-idolater, ex-collaborator as one’s bishop incensed the Catholics of North Africa.  This is totally understandable, and in an age of persecution, we ourselves can readily appreciate their just anger.

But some Catholics went to the extreme of asserting that such men, EVEN WHEN REPENTANT and reconciled to the Church, could no longer hold the offices of Bishop or pastor of souls.

This group was led by a certain Donatus, and so they were called Donatists.  He taught that these repentant clergy were still so odious to God that even the Sacraments they confected were invalid.

So his followers separated from them and began ordaining their own bishops and clergy and seizing Churches. As they had numerous Bishops and clergy among their number, these ordinations and consecrations were valid. But they were usurping jurisdiction in those dioceses where there were already bishops, albeit repentant ones.

So Tyconius’ had a very bad personal experience upon which to begin to theorize interpretations of St. John’s Apocalypse, on such passages as the Whore of Babylon and the Stars Swept out of the Sky by the Dragon’s tail.

His idea was that at the end of time, the True Church and the False Church, which had been cohabiting in the one visible Church, would separate from one another in a sort of final divorce. He called it the great Discessio, a Latin word which means, “walking away from one another”.

And his error was a serious one, because he posited that the false and evil men, who were not among the elect, were not true members of the true Church, and that therefore the Church of the Antichrist or the Body of the Antichrist, as it came to be called in the writings of St. Augustine of Hippo, were a real entity, and thus positively willed by God (since nothing can have real existence but what is positively willed by God).

St. Thomas Aquinas, about a thousand years later, explained how wrong this error is when he succinctly summarized the Catholic doctrine on evil: evil is the deprivation of some good which ought to be in a real existing thing. It has no existence of itself.

The Catholic interpretation of the Apocalypse therefore never envisions the Church of the Antichrist or the Mystical Body of the Antichrist as something positively willed by God, as a real thing existing by itself. It is rather an infection, disease, evil in the one true Mystical Body, though its “members” are really only those who heed the voice of Demons rather than that of God.

Now if Cardinal Ratzinger mused on occasion about Tyconius’ theories, that is nothing really notable, since he commented on the theories of many theologians, Catholic or otherwise during his lifetime. And that he repeated his opinions as Roman Pontiff, means nothing more too, because Popes can express private opinions, as John XXI did regarding what he believed was the necessity that the Saints be purified before attaining Heaven (condemned as a heresy, by his Successor).

But in our day, this error of Tyconius is especially dangerous, because those who accept it would be led to think like Tyconius, that they can pursue fidelity to the will of Jesus Christ by abandoning the visible Church, founding their own Churches, and thus coping out of the Church Militant by a de facto surrender to the forces of Darkness which want to take Her down.

And this is just what the Globalists and Bergoglians would want Catholics to do, because they do not want a restoration. They want to take full possession of the property, moral and legal authority of the visible Church.

Marco Tosatti has been shown the evidence that Benedict XVI is still the pope. He has allowed discussion of it, but personally he has rejected the opinion. He has even stooped to vile insults of those who defend the Holy Father, giving them no space to defend themselves on his blog.

So it does not surprise me that he is airing a theory which is basically saying, “Surrender to Bergoglio and to the Church he is founding”.

But this notion of Tyconius is shared ideologically and widely by many groups, which style themselves as Traditionalist, such as Sedevacantists and many priests and priestly groups which espouse the Traditional Latin Mass, because it is a convenient theory to justify opting out of the visible Church, ignoring Canon law, usurping jurisdiction and authority and washing one’s hands of any responsibility to work for the salvation of your Diocese.

However, it should be noted and highlighted by everyone, that the Holy Father clearly uses a different theory in his Declaratio, when he speaks the vobis decisionem magni momenti. He is speaking not of a great separation, but of how he is announcing that there exists between him and the Cardinals a separation, and that he is cutting them off from the Papal Munus since they won’t obey him any more. His use of the term decisio (“a cutting off”, “a pruning away”) rather than discessio, show that he understands that the Church of the AntiChrist has no life and can have no life separated from the true Church, and its time to distinguish the wheat from the tares. Indeed, what he did in his Declaratio of Feb. 11, 2013, is the means whereby those with true Faith can discern what is going on, while those blinding by their lusts for the world, flesh and devil, cannot.

CREDITS: The Featured Image is a depiction of the meeting between St. Augustine of Hippo and the leaders of the Donatist party, by Charles Andre van Loos (18th century). Note the anachronistic clothing.