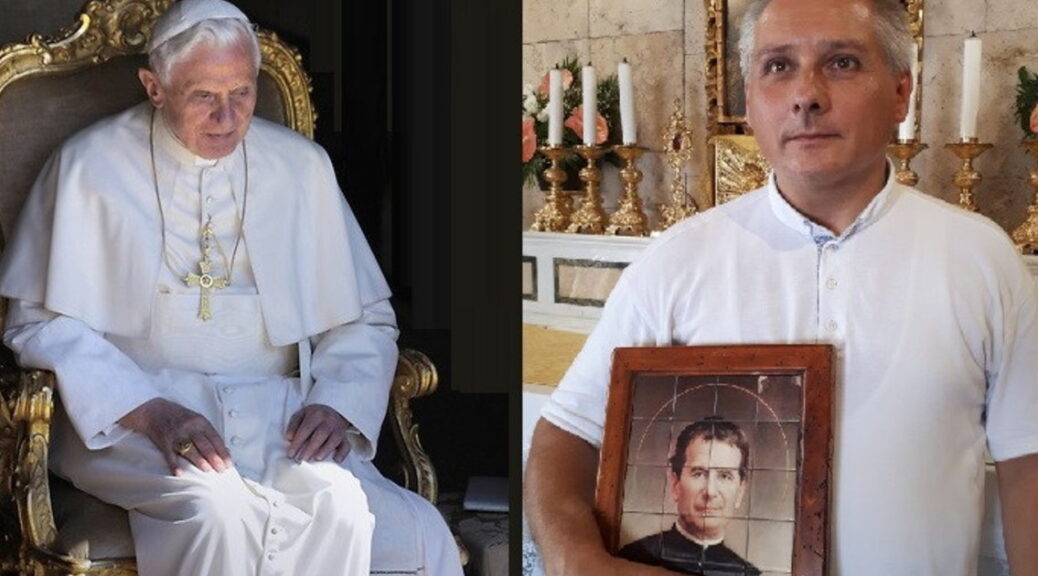 “We all thought the resignation was invalid”

SUMMARY: My Superiors admit that Bergoglio is a bad pope and that they cannot refute canonically that Benedict XVI is still the pope.

With the most absolute indifference of the mainstream Vaticanista, the most sensational story of the Church since the times of the Western Schism is unfolding. Priest-heroes continue to come forth and declare their fidelity to the true Pope, Benedict XVI, who, as you know very well by now, has never abdicated, but, forced to get out of the way, withdrew in an impeded see, (canon 412) — a canonical situation of imprisonment — that allows him to remain the only pope as he has been talking about for nine years without ever being able to specify which of the two. Clearly, if we go to an upcoming conclave with the approximately 120 false cardinals appointed by Bergoglio, another anti-pope will be elected, and goodbye forever visible canonical Church. She will go back to the catacombs.

The impeded see is nothing abstruse or quirky: it has existed since the pontifical “decretals”, that is, since 1200, and canon 335 explicitly identifies it as an alternative to a vacant see: “While the Roman see is vacant or TOTALLY IMPEDED, nothing is to be changed in the governance of the universal Church ”.

Therefore, if the pope renounces the Petrine munus, he abdicates and the see is vacant. If the pope cannot exercise the ministerium, practical power – as per the Declaratio of Pope Benedict – the see is prevented, he remains pope, imprisoned. Ergo, anyone who exercises papal power in his place is a usurper antipope. We have been affirming this for two years, here, twice a week, now also in the bestseller “Codice Ratzinger” (Byoblu ed. May 2022) and no one has been able to deny us, not even the publicly questioned canonists who, in Bologna, in response, after the discovery of the juridical situation, they set up a study group “on the pope emeritus and the impeded pope”. (“Emeritus” does not mean retired, but the one who deserves, who has the right to be pope).

Therefore, however inconvenient, the clergy and the faithful must choose which side to be on: whether with the real pope impeded, or with the reigning antipope.

The first priest (in Italy) to have chosen to follow Christ and his Vicar was Don Alessandro Minutella, a priest from Palermo with two doctorates in dogmatic theology who immediately understood that Bergoglio certainly could not be the pope, with his inverted and antichristic spirituality: Bergogliism. Don Minutella paid dearly for his fidelity to the true pontiff: a suspension a divinis, two excommunications, a reduction to the lay state. Obviously all invalid, as the sanctions were imposed by the anti-papal church. After him, Don Enrico Bernasconi, also invalidly excommunicated, and with pride. Then Friar Celestino, Father Gebhardt (German), Father Johannes (Austrian), Father Pavel (Czech) and Father Natale were joined them. There are several nuns, which we will discuss in his time.

Today we offer you some lines summarized by a full-bodied interview by Samuel Colombo (original Here) with Fr Robert Benko, 52-year-old “ex” Salesian from Slovakia, ordained in 2002, who has made important statements.

C: Father, what made you say in conscience that the Pope is and still remains Benedict XVI?

B. “From the first moment I knew that Benedict XVI is the real Pope. When he resigned I, not understanding Latin, did not know what was happening, but in my heart I felt that something was wrong .. However, I could not give myself a answer at that time because I had no material. The first thing I heard after Bergoglio’s election, which our diocesan priests in Šaštín (but not only) told us, was that the election was invalid because the rules had not been respected “.

C: And why didn’t these priests declare themselves?

B. “At that time, when I heard that it was invalid, I wanted to declare myself immediately, but they told me:“ If you declare yourself, what will you do by yourself? Alone you do nothing. So you can at least do something for the people who are left. You must not fear that in the Vatican they allow us to do things against our faith “, so I preferred to remain silent, because I did not have much information”.

C: Perhaps the right time had to come .. And in the course of all these years you would surely have seen the nefarious work of the so-called Pope Francis …

B. “Yes, that’s right. When I was in the last city, Michalovce, I heard about these “Dubia” that the cardinals wrote … Then other priests and other people joined them, but the question was not resolved. So I started looking and, over time (4 or 5 years ago), I found Don Minutella and I started listening to him. He was the first priest who helped me with the Code of Canon Law because when you work with children or young people there is not much time to deepen things, instead Don Minutella has studied a lot. I felt this was the truth. He burned in my heart. But I didn’t know how to get out. I have had meetings with superiors for 14 months. Two years ago, Don Bernasconi helped me because he sent me an email with some material that I can use to write to my superiors and explain the problem. I asked so many questions asking for an answer. They studied my questions and replied: « We don’t know how to answer you, but we are with Pope Francis. There have been many bad popes in history, we know that he is not good but we are with him » “.

B. “Yes, this is very clear. Because here we are not dealing with a sin of a superior, a bishop or a Pope, or an error .. it is a question of someone who is not a Pope! ”.

C: It may be a foregone conclusion given that “Ubi Petrus Ibi Ecclesia”, but in union with whom do you celebrate Mass, Father Robert?

B. “Before leaving, I was already celebrating mass with Pope Benedict because the churches were closed during the pandemic. So when I celebrated Holy Mass alone, I celebrated it in union with Pope Benedict. But when I had to celebrate in the community they forced me to name Pope Francis. This was the problem. This is why I did not obey. And I didn’t want to join the other communities during those 14 months. My superior told me: “Now I know that you are with Pope Benedict, but I cannot let you go leave immediately, you have to disobey over and over again, so that I may have the material for the superior to let you go”. It is not easy to leave the Salesian community. But if they have material of disobedience… once, twice, three times… ”.

C: But these Salesian priests, your superiors, who sanctioned it and made sure you left, how do they think?

B. “They had pain in their hearts, they were sad, they didn’t want me to go out. Because they knew something was wrong, they couldn’t answer me. It is a serious thing to say “we do not know how to answer you”: then what are we talking about if you do not know how to answer me? From December 2021 I am no longer among the Salesians, but I was very happy, even if my confreres were sad because they loved me. In my heart I am and will always be a Salesian ”.

C: Are there other priests in Slovakia who may not have come out yet but who recognize Pope Benedict XVI as?

B. “Yes, there are, both diocesan and Salesian, but they live in hiding because they are afraid of losing their jobs. Even teachers in schools understand that this is not the teaching of the Church, but they must continue because without money they cannot support the family “.

C: So they are kept, let’s say, under blackmail … Is there any bishop in Slovakia that you recognize as Pope Benedict XVI?

C: Considering the fact that Bergoglio has created a new false church, as prophesied by Padre Pio in a dialogue with Father Amorth, in your opinion are the masses celebrated in union with the so-called Pope Francis to be considered valid?

C: You have been suspended a divinis, but you have not been excommunicated yet …

B. “No .. but now I have learned that in Trnava it is said that the archbishop of Bratislava Stanislav Zvolenský wants to excommunicate me because he has heard that we are growing and we are increasing”.

C: Let’s say that the so-called Pope Francis is the spiritual leader of the New World Order. Do you agree with this statement?

C: And are we living, in your opinion, the Third Secret of Fatima and that deception mentioned in the Catechism of the Catholic Church in 675?

In all this, Pope Benedict does not speak, he cannot, given that he is in an impeded see, and he does not deny these priests, nor anyone who speaks of an impeded see, much less the preset writer. Indeed, in a letter a few days ago to the Gioacchino da Fiore Studio Center, He wrote: “In the historical action of God, the truth is gradually revealed”.

And whoever has ears to hear, let him hear it!